The Imagemagick security policy seems to be not allowing me perform this conversion from pdf to png. Converting other extensions seem to be working, just not from pdf. I haven't changed any of the imagemagick settings since I installed it... I am using Arch Linux, if the OS matters.

just before </policymap> in /etc/ImageMagick-7/policy.xml and that makes it work again, but not sure about the security implications of that.

This issue is a workaround for a security vulnerability. The vulnerability has been addressed in Ghostscript 9.24 (source), so if you have that or a newer version, you don't need the workaround anymore.

On Ubuntu 19.04 through 21.04 and probably any later versions coming with ImageMagick 6, here's how you fix the issue by removing the workaround:

As pointed out in some comments, you need to edit the policies of ImageMagick in /etc/ImageMagick-7/policy.xml. More particularly, in ArchLinux at the time of writing (05/01/2019) the following line is uncommented:

Just wrap it between <!-- and --> to comment it, and pdf conversion should work again.

For me on Arch Linux, I had to comment this:

For me on my archlinux system the line was already uncommented. I had to replace "none" by "read | write " to make it work.

Add this line inside <policymap>

The ImageMagick change was kept after Ghostscript was fixed because applications (especially web applications) often feed arbitrary user-supplied files to ImageMagick, don't always enforce format restrictions properly, and, since Postscript (which PDF uses) is a turing-complete programming language running in a sandbox, there's always the possibility of another hole in the sandbox.

It's much better to leave things configured so ImageMagick refuses to process files that require running a program and, instead, just invoke Ghostscript directly when you intentionally want to permit Postscript rendering.

That would be accomplished by a Ghostscript command like this:

Yes, this is a variation on the GhostScript command ImageMagic calls. (see ImageMagick's delegates.xml. -o is shorthand for -dBATCH -dNOPAUSE -sOutputFile=)

What's important is that ImageMagick stays locked down, you don't needlessly invoke an intermediate program, and you get more control over the rendering parameters. (eg. -r600 is the DPI to render at and changing -sDEVICE=pngalpha allows you to render directly to your desired format)

After that, this command work without error

Well, at least in Ubuntu 20.04.2 LTS or maybe in other versions you can't really edit the policy.xml file directly in a GUI way. Here is a terminal way to edit it. 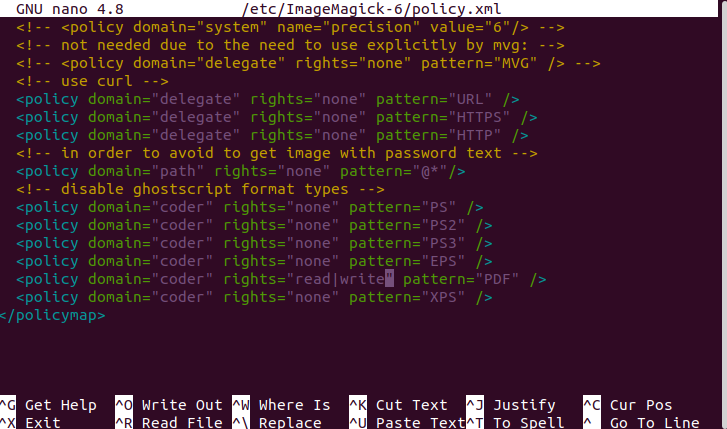 I was experiencing this issue with nextcloud which would fail to create thumbnails for pdf files.

However, none of the suggested steps would solve the issue for me.

Eventually I found the reason: The accepted answer did work but I had to also restart php-fpm after editing the policy.xml file:

in my /etc/ImageMagick-6/policy.xml I've removed below lines, restarted my machine and I'm done.

Not the answer you're looking for? Browse other questions tagged linux ubuntu pdf imagemagick imagemagick-convert or ask your own question.

112
Merging png images into one pdf file
63
ImageMagick not authorized to convert PDF to an image
45
How to convert a PDF into JPG with command line in Linux?
11
ImageMagick ghostscript 'delegate' security policy blocking conversion
6
Attempt to perform an operation not allowed by the security policy `PDF' @ error/constitute.c/IsCoderAuthorized/408
4
Is there any way converting a PDF to jpeg with golang?
3
ImageMagick unable to convert PDF to images on WSL
0
TYPO3 image manipulation also for PDF files?
2
save_kable does not work after installing R v4.0.2
1
imagemagick convert RGB PNG to CMYK PDF
See more linked questions