I am trying to get the blue rectangle container to have a larger z-index than the other boxes when hovering over elements that overflow the container.

Game 3 here has the larger z-index, but I want to access the Loser select in the blue circle below, however I can't, unless I hover back over the blue rectangle to gain focus.

Is there a way around this where it can be handled with just CSS or do I need JQuery?

I created a Fiddle that can replicate this so ignore any JS errors as the actual page requires quite a bit of includes, however the issue is in tact. Hover over the 4th game which has three dropdowns, Source, Pools, Seeds. You can select Seeds just fine. However, hover over another game at the top then come back down to "Seeds", you can't select it unless you hover over "Pools" again. I need "Seeds" to always be selectable regardless of what the overflow is.

The .forward puts a large zindex on the blue rectangle area.

This was actually a surprisingly easy fix once you understood the structure and the actual problem. Div's covering div's. First you disable all click events on everything within .bracket-part as they aren't needed. Then you add the click events back onto the selects. To make it more generic for easier use again you can simple change select in the CSS selector a class .re-enable-events or something. The JS about z-index's wasnt actually needed.

Pointer events has a very good compatibility rate so this solution should be fine across pretty much all devices.

To get straight to the point: There is no clean CSS-only solution to your problem.
Since all your elements are pretty much identical (and by that I mean the class for example) you will not find a solution that covers all configurations. Since they do not differ from each other they all have the same z-index but not the same stacking context. Unless you give their parents a different z-index or change the stacking context you will not be able to access the blocked element. It also comes down to how limited you are with changing the code. The code looks like it has been build by JS and you just copied it to your fiddle for us to test.

Attempt #1 is to just add high z-index directly to the according parent.
@mmshr already tried to do this. However, he tried to give the whole class a high z-index which is not gonna work out of course as you've already pointed out.

You could however try to only give this element a high z-index element in its style attribute. This comes down to how limited you are with changing the code. You could theoretically use JQuery for this but the way you would select the element (e.g. by nth-child()) brings me to Attempt #2 which uses the same pseudo-class and is a CSS-only attempt so using JS is nonsense in this case. By the way if you can change your code like this you could remove your little JQuery function that adds the forward class on hover.

This attempt works fine and you are not limited by the ability to change code since this is pretty much one line of CSS. As already stated in Attempt #1 you could use a pseudo-class to select this element. However, this is not valid for all configurations. If you would add one element
(<div data-bind="template: { name: 'bracket-template', data: $data }">...</div>) before your blocked element you would have to change your CSS each time. But if there is no need for changing elements and configurations (or at least not the order) this is a valid solution:

In this attempt you can (and have to) remove your little JQuery function too:

Most important is this part because it applies to your structure:

Boxes with the same stack level in a stacking context are stacked back-to-front according to document tree order.

If you take a look at your HTML tree you will find the following: 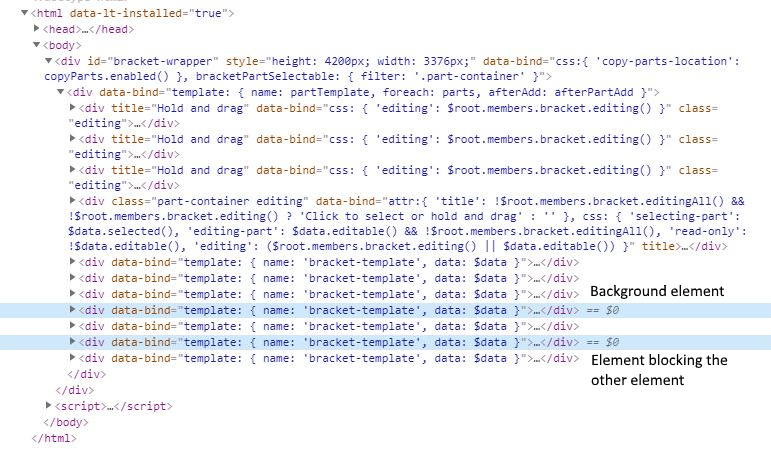 It is just a guess but you probably have something like an array where you store the data and some JS-file builds a tournament bracket out of it. If you could somehow change the order of those two elements (for example by changing the order of your array) you would not use CSS and would not use any additional JQuery.

What if none of these work?

Well, then I do not see any solution that requires only CSS.

I also thought about a possible JS solution but this is a tough one and I couldn't figure out a (simple) solution. Let me explain the problem:

Since your select is behind a div element JQuery would not recognize it (e.g.) on hover so you would have to use pseudo-classes again which I already covered with a CSS-only attempt.
I also thought about adding a z-index of -1 to the blocking element, because JQuery could recognize it on hover. But this leads to problems too: the blocking element is now in the background and the blocked element in the front and you can also click it. The problem is that the (former) blocking element is now behind the #bracket-wrapper. This is also not a valid solution because you would have to use a pseudo-class again to target this specific element.

I am gonna be honest with you: This tournament tree is poorly designed and structured. There shouldn't be overlapping elements or elements outside of a container and certainly not both in combination. If none of my attempts are suitable I do not see any CSS or JS solution. At least not a simple one. You have provided little information about how the tournament tree is build but things could change if you do.
At this state I think rebuilding this whole structure is the only really clean solution.

@Deckerz provided a great solution which does not focus on the z-index. Instead, it uses pointer-events. I tried this approach but failed because I forgot an important part. The logic behind it is simple:

First you disable all click events on everything within .bracket-part as they arent needed. Then you add the click events back onto the selects. To make it more generic for easier use again you can simple change select in the CSS selector a class .re-enable-events or something. The JS about z-index's wasnt actually needed.

However, this is still a workaround. I still recommend restructuring your code and CSS.

If you want Seeds to always be selectable, why not always give it's bracket-part parent a high z-index?

If you add z-index: 10000; to Seeds' bracket-part parent styles, Seeds will always be selectable:

Not the answer you're looking for? Browse other questions tagged html css z-index or ask your own question.

21
Why the content is not covered by the background of an overlapping element?

1041
Adding HTML entities using CSS content
1732
Retrieve the position (X,Y) of an HTML element relative to the browser window
1039
CSS selector for first element with class
1594
How can I set the default value for an HTML <select> element?
987
Selecting and manipulating CSS pseudo-elements such as ::before and ::after using javascript (or jQuery)
493
CSS overflow-x: visible; and overflow-y: hidden; causing scrollbar issue
536
CSS text-overflow in a table cell?
90
Bring element to front using CSS