So I am fairly new to Computer Vision in general. I am currently trying to calculate a homography by analyzing 2 images. I want to use the homography to correct the perspective of 1 image to match the other. But the matches I am getting are just bad and wrong. So the homographic warp I do is completely off.

I am using EmguCV for wrapping opencv in C#. I got as far as that my code seems to work "properly".

I load my two images and declare some variables to store calculation artifacts.

Notice that I use a ValueTuple<Image,VectorOfKeyPoint,Mat> to store the images directly with their respective Keypoints and Descriptors.

After this is use an ORB detector and BruteForce matcher to detect, describe and match the keypoints:

After this I apply the ratio test and do some further filtering by using a match-distance threshold.

Disabling any of these filter methods isn't really making my results much better or worse (just keeping all matches) but they seem to make sense so I keep them.

In the end I calculate my homography from the found and filtered matches then warp the image with this homography and draw some debug images:

Example for the algorithm

Test whether projection is going wrong

Original images are 2448x3264 each and scaled by 0.2 before running any calculations on them.

Basically it's as simple yet complex as: What am I doing wrong? As you can see from the example above my method of detecting features and matching them just seem to work extremely poorly. So I am asking if someone can maybe spot a mistake in my code. Or give advice on why my results are so bad when there are hundreds of example out on the internet showing how it works and how "easy" it is.

What I tried so far:

Original Images: The original images can be downloaded from here: https://drive.google.com/open?id=1Nlqv_0sH8t1wiH5PG-ndMxoYhsUbFfkC

So I did some further research after asking. Most changes are already included above but I wanted to make a separate section for this one. So after running into so many problems and seemingly nowhere to start I decided to google up the original paper on ORB. After this I decided to try and replicate some of their results. Upon trying this I realised that even I try to match the match image rotate by a degree the matches seem to look fine but the transformation completely breaks down.

Is it possible that my method of trying to replicate the perspective of an object is just wrong?

https://drive.google.com/open?id=17DwFoSmco9UezHkON5prk8OsPalmp2MX (without packages, but nuget restore will be enough to get it to compile)

I encountered the same problem and found a suitable solution this: github Emgu.CV.Example DrawMatches.cs in which everything works.

I modified the code and method FindMatch looks like that: 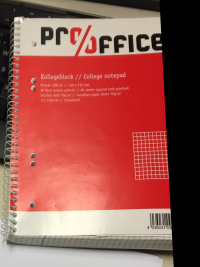 If you want to watch the process use next code: 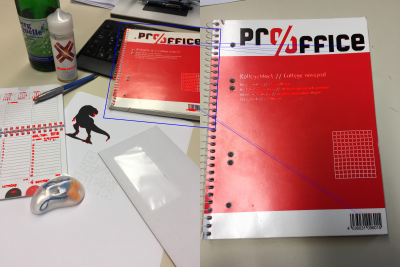 The biggest problem was actually a quite easy one. I had accidentally flipped my model and test descriptors when matching:

But if you look at the documentation of these functions you will see that you have to add the model(s) and match against the test image.

I don't know why by now but Features2DToolbox.GetHomographyMatrixFromMatchedFeatures seems to be broken and my homography was always wrong, warping the image in a strange way (similar to the above examples).

To fix this I went ahead and directly used the wrapper invoke to OpenCV FindHomography(srcPoints, destPoints, method). To be able to do this I had to write a little helper to get my data-structures in the right format:

Now everything works fine and as expected:

Not the answer you're looking for? Browse other questions tagged c# opencv feature-detection or ask your own question.