How can I merge multiple commits onto another branch as a single squashed commit?

I have a remote Git server, here is the scenario which I want to perform:

So how can I merge my branch to remote branch so that they get just one commit for all my check-ins (I even want to provide commit message for this)?

Say your bug fix branch is called bugfix and you want to merge it into master:

This will take all the commits from the bugfix branch, squash them into 1 commit, and merge it with your master branch.

Switches to your master branch.

Takes all commits from the bugfix branch and groups it for a 1 commit with your current branch.
(no merge commit appears; you could resolve conflicts manually before following commit)

Creates a single commit from the merged changes.

Omitting the -m parameter lets you modify a draft commit message containing every message from your squashed commits before finalizing your commit.

What finally cleared this up for me was a comment showing that:

is the equivalent of doing:

When I want to merge a feature branch with 105(!!) commits and have them all squashed into one, I don't want to git rebase -i origin/master because I need to separately resolve merge conflicts for each of the intermediate commits (or at least the ones which git can't figure out itself). Using git merge --squash gets me the result I want, of a single commit for merging an entire feature branch. And, I only need to do at most one manual conflict resolution.

You want to merge with the squash option. That's if you want to do it one branch at a time.

If you want to merge all the branches at the same time as single commits, then first rebase interactively and squash each feature then octopus merge:

Squash into one commit then repeat for the other features.

That last merge is an "octopus merge" because it's merging a lot of branches at once.

Suppose you worked in feature/task1 with multiple commits.

Merge newFeature branch into master with a custom commit:

If instead, you do

you will get a commit message that will include all the newFeature branch commits, which you can customize.

I explain it thoroughly here: https://youtu.be/FQNAIacelT4

If you have already git merge bugfix on main, you can squash your merge commit into one with:

I know this question isn't about Github specifically, but since Github is so widely used and this is the answer I was looking for, I'll share it here.

Github has the ability to perform squash merges, depending on the merge options enabled for the repository.

If squash merges are enabled, the "Squash and merge" option should appear in the dropdown under the "Merge" button. 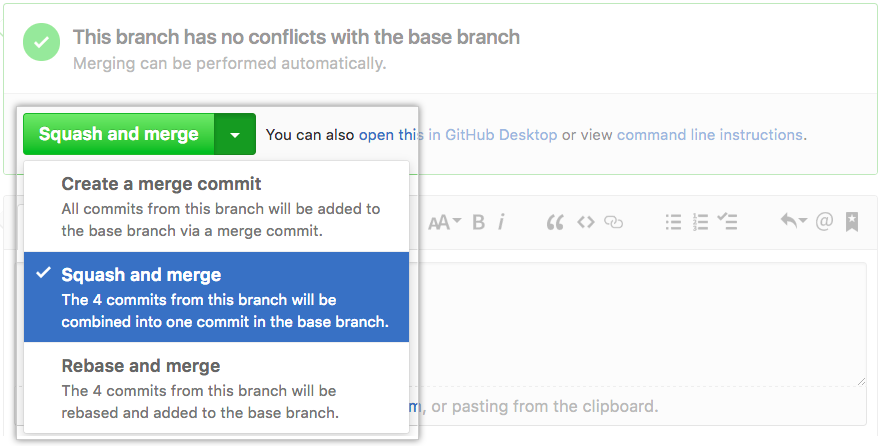 To squash your local branch before pushing it:

This doesnt commit it, allows you to review it first.

Then commit, and finish feature from this new branch, and delete/ignore the old one (the one you did dev on).

if you get error: Committing is not possible because you have unmerged files.

fixed all the Conflict files

you could also use

Your feature branch is done and ready to commit to master, develop or other target branch with only one commit

Replace master with your target branch : develop and so on

Now this branch will have only one commit with all your changes in it.

You can use tool I've created to make this process easier: git-squash. For example to squash all commits on feature branch that has been branched from master branch, write:

to check what's going on.

And now last but not the least

Here origin can be other remote you prefer.

1
Proper git workflow with feature branches
1
How let feature branch merged to master but only listed with 1 commit in master?
-1
How to merge and squash at the same time
19868
How do I delete a Git branch locally and remotely?
768
Git: How to squash all commits on branch
475
Combining multiple commits before pushing in Git
458
GitHub: How to make a fork of public repository private?
456
What to do with branch after merge
59
Git rebase (Merge Squash) my feature branch onto another branch
57
Git merge branch into master
See more linked questions

1733
How can I selectively merge or pick changes from another branch in Git?
4083
How do I delete a commit from a branch?
1499
How can I revert multiple Git commits?
1374
How to cherry-pick multiple commits
823
How to cherry-pick a range of commits and merge them into another branch?
1999
Make the current Git branch a master branch
1869
How can I get a list of Git branches, ordered by most recent commit?
2567
How do I safely merge a Git branch into master?
1979
Remove tracking branches no longer on remote
1285
How can I undo pushed commits using git?