#pragma mark not showing in methods in Xcode 4.0

I was using these #pragma marks to make it easy to quickly organize and get to information that appears in different sections of my tableviews and I would really like to get that functionality back.

Anyone know how to get them to appear again?

I'm also experiencing this problem. A pragma mark added before the first method will not show up. For example, this will not work:

Here are some quick-dirty workarounds to make the pragma mark before the first method show up. You can add an empty block before it or you can just put the pragma mark inside the block itself.

Adding the pragma mark inside the empty block itself:

It doesn't look too pretty but it works. I hope that helps.

I had this problem while using a syntax that used to work on xcode 3.x and does not work for xcode 4 anymore.

I was using just "pragma"

That used to work fine for xcode 3 but, for xcode 4, the complete syntax has to be used. This means that #pragma must always be followed by the "mark" keyword.

Did #pragma marks work inside of methods in the previous xcode? I really would like to use them, but like you said, it only works in between methods but not within a method, which would be really useful.

BUMP if anybody has any ideas on ways to achieve adding code to a section within a method that would add it to the XCode jump bar...

If I am wrong, let me know, but I don't think I am. If this should work, I hope it gets fixed!!

Apparently there are some issues in the pragma parser in Xcode. In my case I could make the #pragmas re-appear by unificating their syntax to the new one.

Instead of having not uniform and messy chunks of code with some pragmas in it:

I changed everything to:

Basically, I made sure...

I've realized that sometimes above rules are not enough if the project is broken somewhere. ( I tried moving some sources to a new project and they showed correctly). So what I did is close my project, delete its derived data from the organizer and also delete these two folders

So next time I open my project Xcode will re-generate them :)

Now ALL my sources are OK again :)

For marks within the methods (or anywhere else) you can now use keyword TODO: as comment.

I'm not sure about xcode version this became available (probably 4.5+), but it's available in latest one. 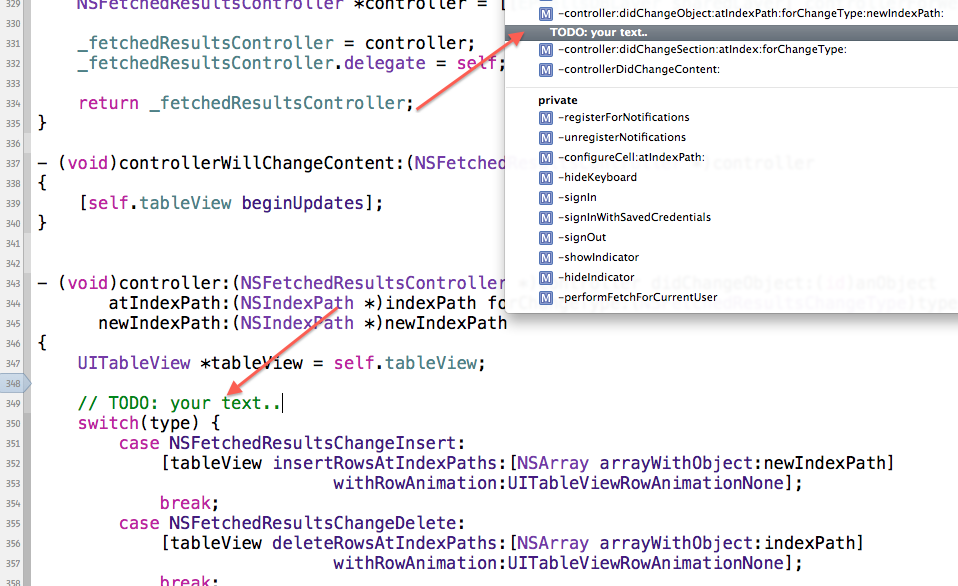 Thanks for the work-around ideas. Assigned to a macro allows for easy removal in the future:

I tend to have global Macro files for helpful things like this. You know, quick encode/decode, accessors (for the days prior to properties) and the like.

I encountered the same problem. I now insert a dummy method after @implementation ... and before the first 'real' method. I define this method in the project's ...-Prefic.pch file so it does not show up in the Jump Bar.

Add the following to your ...-Prefix.pch:

And insert the request in your omplementations:

I realize there is probably a very small percentage of uses for whom what I'm about to say applies, but just in case...

user1639164 - At the risk of being pedantic, I'd say you're "95%" correct. I found it is possible to get Xcode to display a pragma before your first method. If the first chunk of code in a source file happens to be a regular procedure rather than a method, then you will get the pragma showing up. E.g.

This is an extract from my boilerplate app delegate code. In this case, you will see the pragma show up before the first method. But not before your first chunk of code! :-) So it's as if the pragma parsing machinery can't get its ass in gear until it's seen at least one routine - method or otherwise. As you say, hope it's fixed soon.

To clarify the correct answer by RantriX…

If your first #pragma mark fails to appear in the jump bar's context menu, add a pair of braces. (Xcode version 4)

For example, change this:

to this (note the curly braces):

For showing pragma marks in Jump Bar try this :

Not the answer you're looking for? Browse other questions tagged xcode4 pragma or ask your own question.

8
Where do you see the result of "#pragma mark" in Xcode 4?
5
Alternatives to #pragma that work inside methods in Xcode 4

22
Xcode - Using #pragma mark
6
Should I use Xcode 4? How to get started? Aproach it?
142
Archives not showing up in Organizer for Xcode 4
4
Xcode 4 -- want my menu of alphabetized methods back
166
Missing file warnings showing up after upgrade to Xcode 4
3
has uitabbarcontroller changed in xcode 4
0
XCode 4.0.2 and warnings not going away!
5
Alternatives to #pragma that work inside methods in Xcode 4
235
Xcode iOS project only shows "My Mac 64-bit" but not simulator or device
21
#pragma mark not listing the first group name