I deleted derived data. i have tried :

Restarted machine, no use

How do I resolve "Command PhaseScriptExecution failed with a nonzero exit code" error when trying to archive project.

And I am using those librarys

After trying all the solutions, I was missing is to enable this option in:

In newer versions it may be listed as:

Thats it. Have Fun

For me, I was removing Crashlytics, Fabric and FirebaseCrashlytics. So there was a script (Run Script) for Fabric. So since app was running that first and I had removed the framework already, I was getting this error. So I removed the Run Script tab for Fabrics and then it worked perfectly fine.

In my case the error was caused by the lack of space on my machine. Deleting old builds fixed the problem.

For me, the issue was with the node version that xcode was using. My project was building fine in Expo but not in Xcode after ejecting. I found my answer here: https://github.com/expo/expo/issues/8488

I was facing this issue because of Firebase Crashlytics. In Targets -> Build Phases -> Run Script

I changed that and put it in double quotes

if nothing change make this step 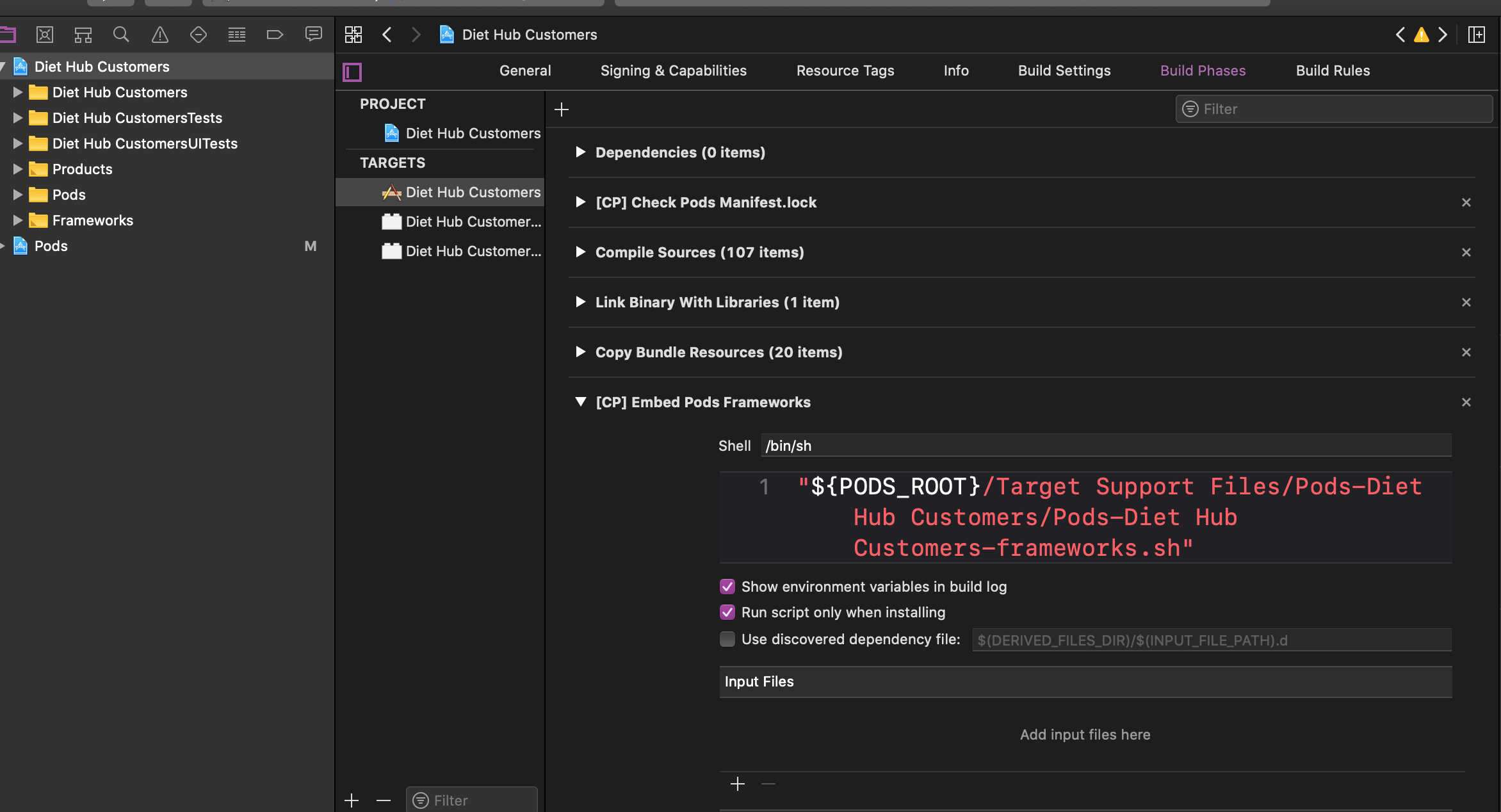 Another reason for the error might be is that Xcode is running a script during the run phase.

If this is the case, you have 2 options:

In my case, the script was important, so I modified/updated its location.

Originally, the script location path was written like this:

Because the scripts path contained spaces (I moved the project to a new directory), I changed the path to this:

By adding quotes to SRCROOT, changing it to "$SRCROOT", the error will go away.

Restart worked for me... Mac OS restart, not xCode restart...

By mistake I had uninstalled carthage from my system. Adding that fixed the issue for me.

For Xcode 11, React Native development environment. I usually have this problem when a dependency is not updated.

You can try following these steps, this usually works for me:

1- Delete your Podfile.lock (I like to use the command '-rm -rf Podfile.lock' on the terminal for this)

If you are doing Unity Project. You can get this error.

The solution is very simple

It worked for me)

I think that installing "cocoapods" is not necessary, only step 3 and 4 enough to solve, but it does not work, you can try it.

I used flutter to create iOS project. When build for Simulator, failed with the same error message. It is solved by following work.

xCode 12.3 Build Settings->Build Active Architecture Only, set it to Yes.

I have a project in React Native and suddenly this error appeared. I was doing something with homebrew beforehand and this solved the issue for me:

Take Pods-resources.sh from project path and paste in Terminal

In my case I have removed Run Script from the Build Phase in XCode.

For me the reason was while changing name of app I added a single quote ' in name. I tried different solution and ran into different errors, but at last, while renaming app, I did not include ' single quote and it solved the problem.

I had a similar error

In my case I had received a zip of a repo that included the Pods folder. It turns out that at some point between it being originally created and sent to me, the *.sh files in Pods/Target Support Files/Pods-{PROJECT}/ had all lost their execute permissions. Giving those files +x was the solution

I had the same problem in Xcode 11.5 after revoking a certificate through Apple's developer homepage and adding it again (even though it looked different afterwards):

Every time I tried to archive my app, it would fail at the very end (not the pods but my actual app) with the same PhaseScriptExecution failed with a nonzero exit code error message. There is/was a valid team with an "Apple Development" signing certificate in "Signing & Capabilities" (project file in Xcode) and locking & unlocking the keychain, cleaning & building the project, restarting,... didn't work.

The problem was caused by having two active certificates of the same type that I must have added on accident, in addition to the renewed one. I deleted both the renewed one and the duplicate and it worked again.

You can find your certificates here or find the page like this:

Also check that there aren't any duplicates in your keychain! Be careful though - don't delete or add anything unless you know what you're doing, otherwise you might create a huge mess!

Remove a space in fileName

In my case was that I changed a line in a script of my Xcode project and that line was badly written (I forgot to add ";" at the end of the line). So I added the ";" and clean and build project.

What helped for me was: In Targets -> Signing & Capabilities > Uncheck Automatically manage signing (or check and uncheck if it was unchecked ) > build project

Xcode will refuse to sign them. The above script removes unused architectures.

I tried most of above. I was developing in Flutter so what worked for me was pub cache repair.

I got the error while using react-native-config.
Got this error since I had an empty line in .env files...

3 hours wasted, maybe will save someone time

Not the answer you're looking for? Browse other questions tagged ios swift xcode cocoapods xcode10.2.1 or ask your own question.