Assume I have multiple processes writing large files (20gb+). Each process is writing its own file and assume that the process writes x mb at a time, then does some processing and writes x mb again, etc..

What happens is that this write pattern causes the files to be heavily fragmented, since the files blocks get allocated consecutively on the disk.

Of course it is easy to workaround this issue by using SetEndOfFile to "preallocate" the file when it is opened and then set the correct size before it is closed. But now an application accessing these files remotely, which is able to parse these in-progress files, obviously sees zeroes at the end of the file and takes much longer to parse the file. I do not have control over the this reading application so I can't optimize it to take zeros at the end into account.

Another dirty fix would be to run defragmentation more often, run Systernal's contig utility or even implement a custom "defragmenter" which would process my files and consolidate their blocks together.

Another more drastic solution would be to implement a minifilter driver which would report a "fake" filesize.

But obviously both solutions listed above are far from optimal. So I would like to know if there is a way to provide a file size hint to the filesystem so it "reserves" the consecutive space on the drive, but still report the right filesize to applications?

Otherwise obviously also writing larger chunks at a time obviously helps with fragmentation, but still does not solve the issue.

Since the usefulness of SetEndOfFile in my case seems to be disputed I made a small test:

When the application is executed and it waits for a keypress after SetEndOfFile I examined the on disc NTFS structures: 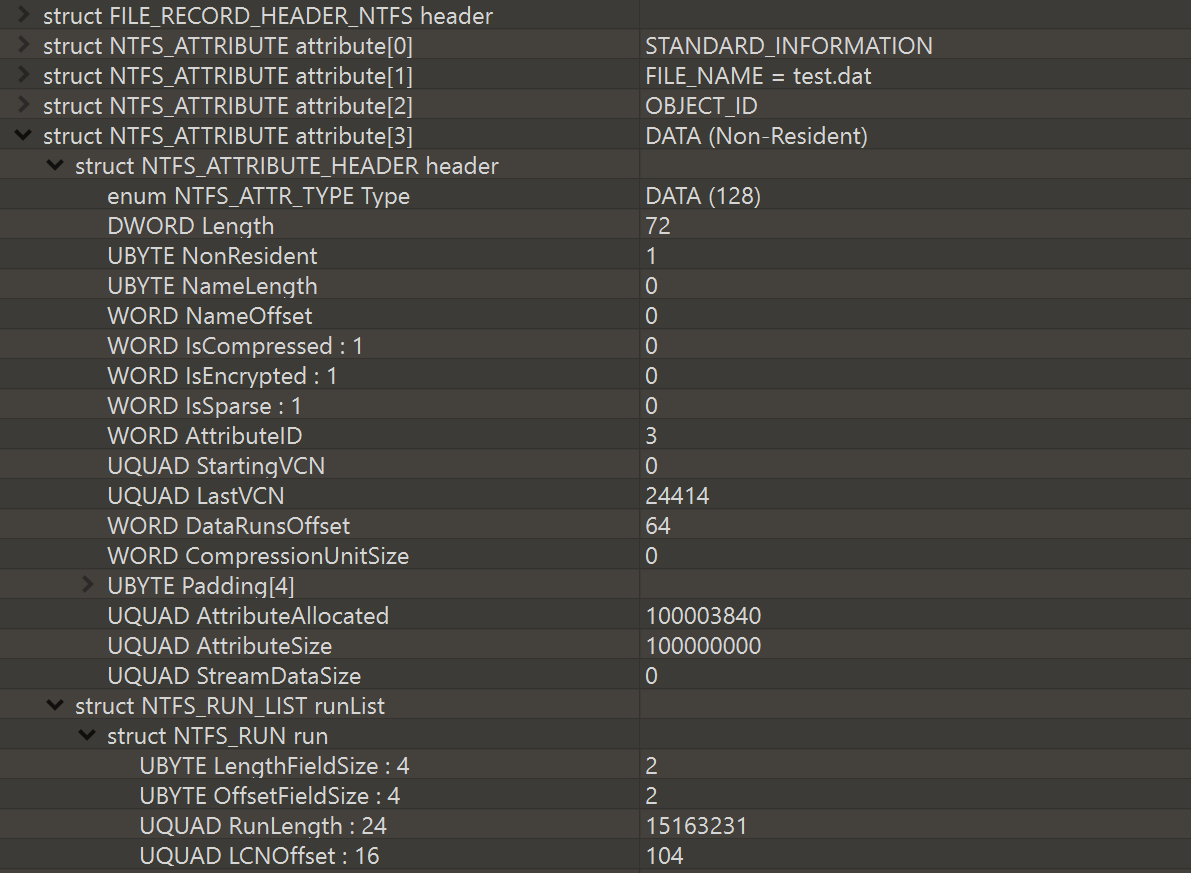 The image shows that NTFS has indeed allocated clusters for my file. However the unnamed DATA attribute has StreamDataSize specified as 0. 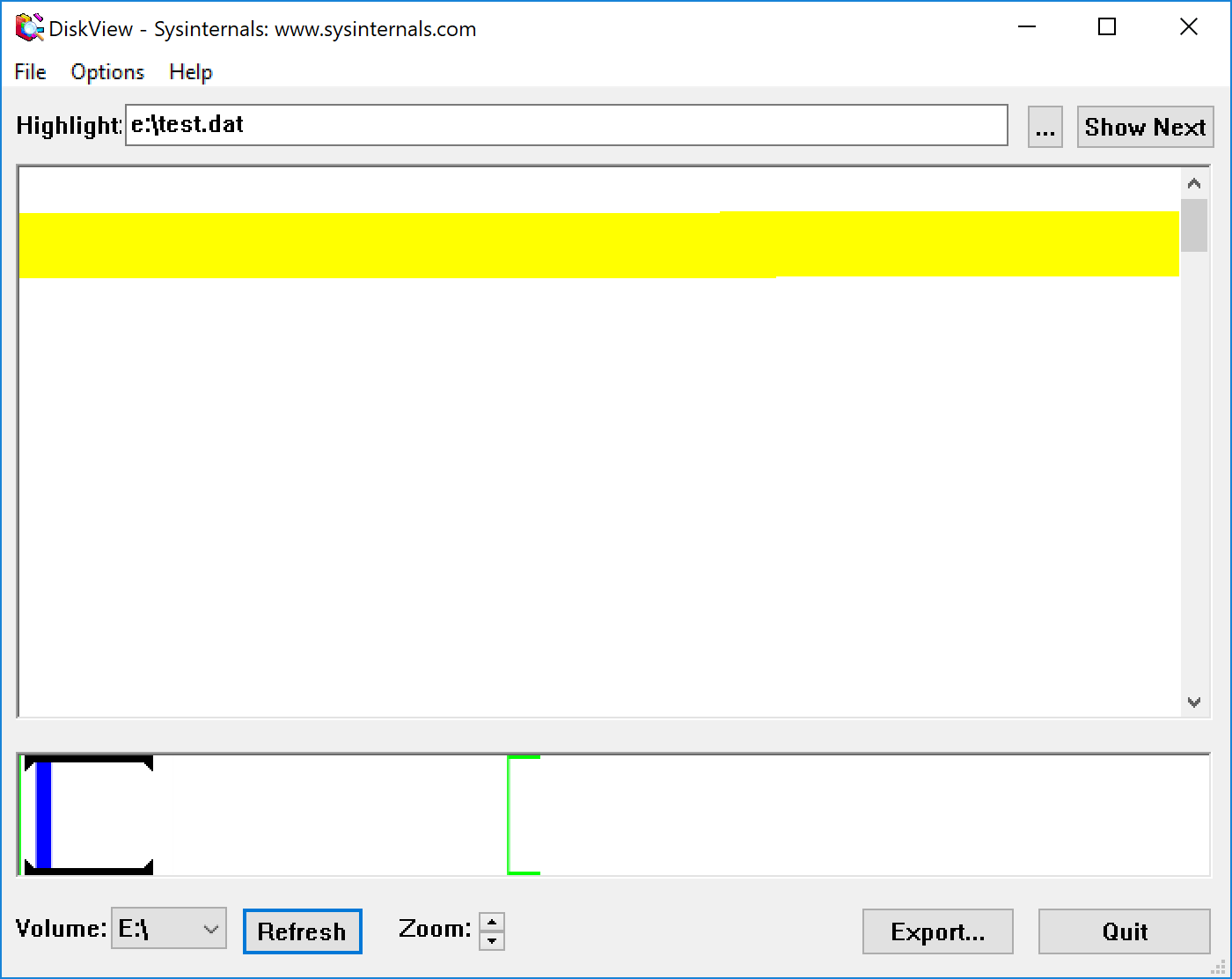 When pressing enter to allow the test to continue (and waiting for quite some time since the file was created on slow USB stick), the StreamDataSize field was updated 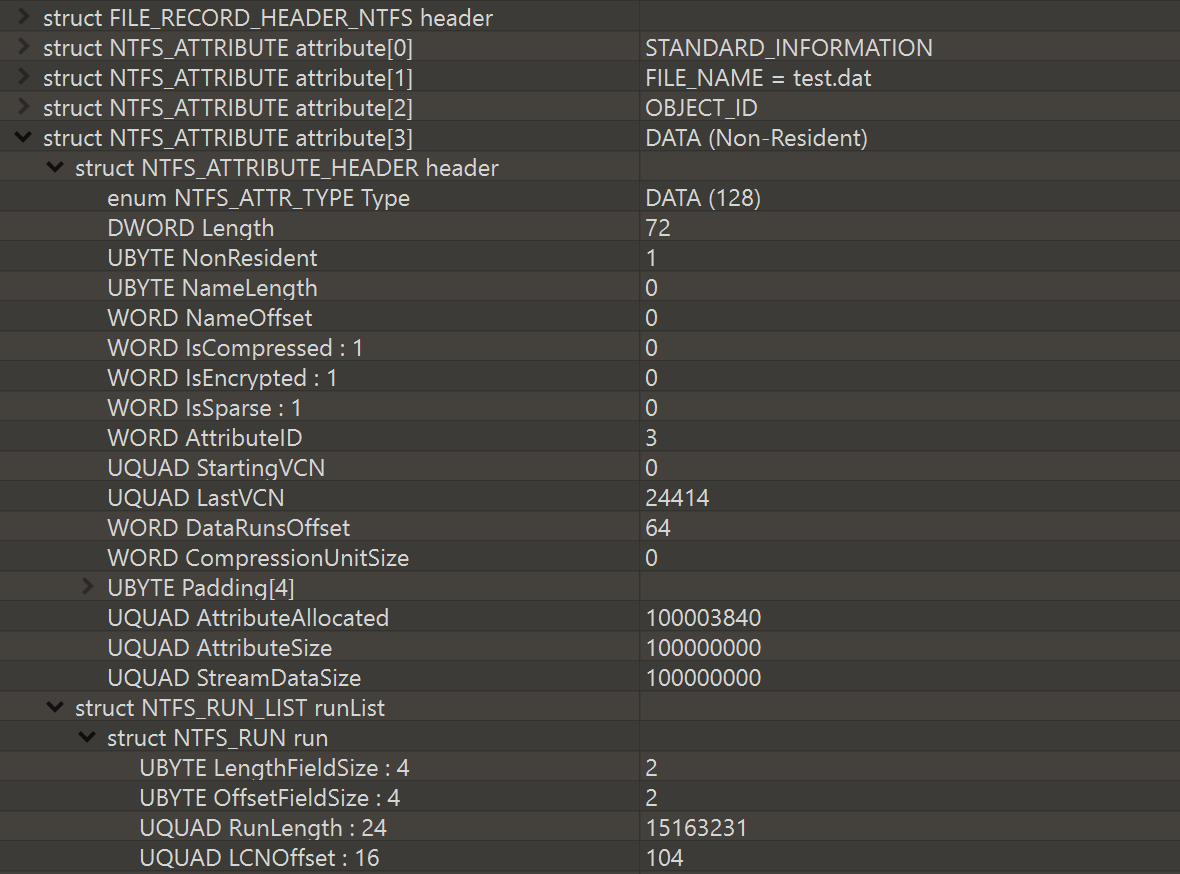 Since I wrote 1 byte at the end, NTFS now really had to zero everything, so SetEndOfFile does indeed help with the issue that I am "fretting" about.

I would appreciate it very much that answers/comments also provide an official reference to back up the claims being made.

Oh and the test application outputs this in my case: 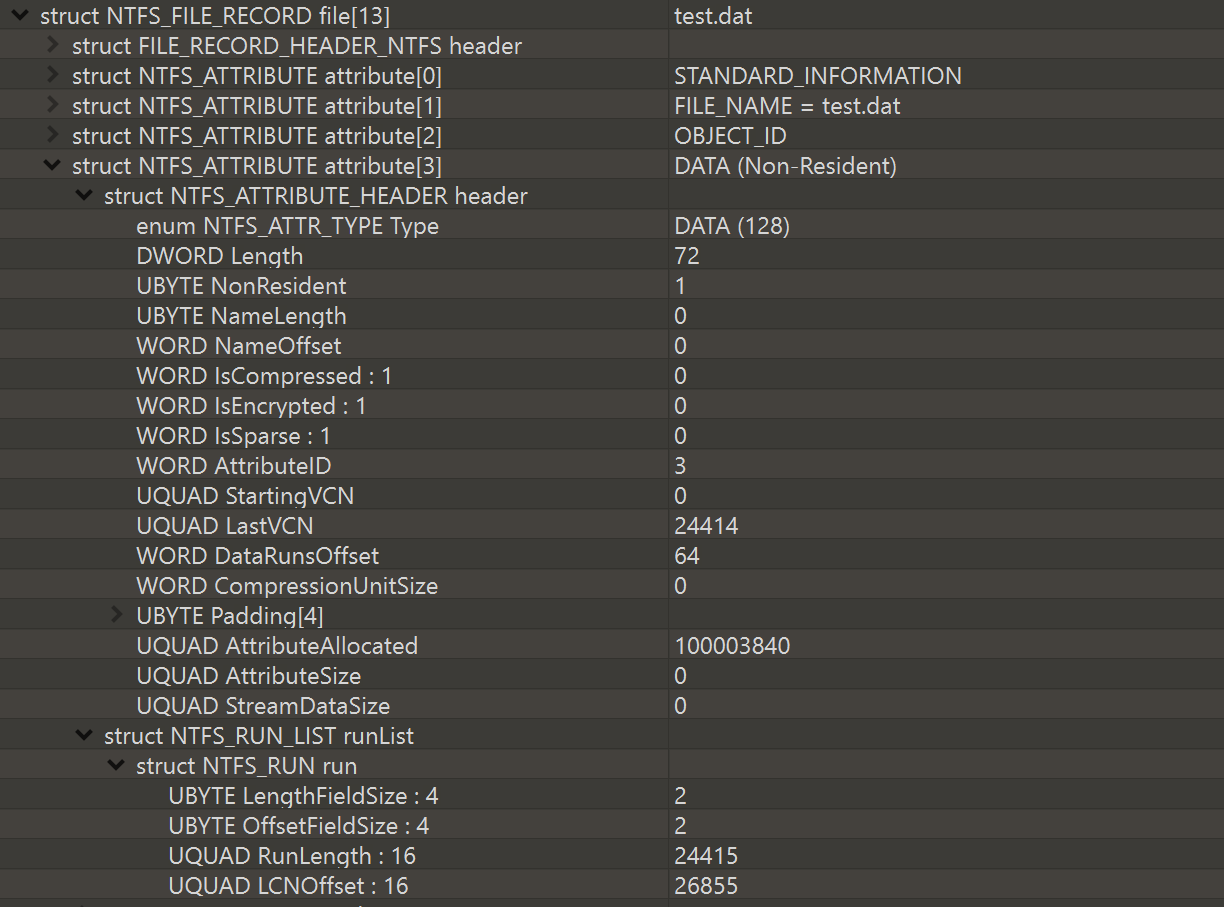 Windows file systems maintain two public sizes for file data, which are reported in the FileStandardInformation:

Starting with Windows Vista, we can manually extend the allocation size without modifying the end of file via SetFileInformationByHandle: FileAllocationInfo. You can use Sysinternals DiskView to verify that this allocates clusters for the file. When the file is closed, the allocation gets truncated to the current end of file.

If you don't mind using the NT API directly, you can also call NtSetInformationFile: FileAllocationInformation. Or even set the allocation size at creation via NtCreateFile.

FYI, there's also an internal ValidDataLength size, which must be less than or equal to the end of file. As a file grows, the clusters on disk are lazily initialized. Reading beyond the valid region returns zeros. Writing beyond the valid region extends it by initializing all clusters up to the write offset with zeros. This is typically where we might observe a performance cost when extending a file with random writes. We can set the FileValidDataLengthInformation to get around this (e.g. SetFileValidData), but it exposes uninitialized disk data and thus requires SeManageVolumePrivilege. An application that utilizes this feature should take care to open the file exclusively and ensure the file is secure in case the application or system crashes.

Not the answer you're looking for? Browse other questions tagged windows ntfs hint refs pre-allocation or ask your own question.

1194
How can I develop for iPhone using a Windows development machine?
2341
How can you find out which process is listening on a port on Windows?
755
Windows batch files: .bat vs .cmd?
184
NTFS performance and large volumes of files and directories
2386
Is there an equivalent of 'which' on the Windows command line?
1130
Ignoring directories in Git repositories on Windows
418
PHPDoc type hinting for array of objects?
698
Redirect Windows cmd stdout and stderr to a single file
2555
How to install pip on Windows?
1
NTFS sparse file data runs ($UsnJrnl)