I followed the steps in https://blog.jetbrains.com/idea/2013/03/packaging-javafx-2-applications-in-intellij-idea-121/ 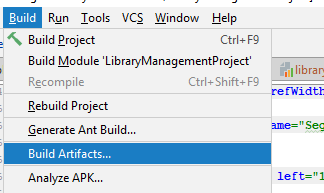 Error:Java FX Packager: Can't build artifact - fx:deploy is not available in this JDK

I know JavaFX has been removed from java11 my question is what should I do to build a .jar or .exe

here is a hello world app for quick testing.

Using the JavafX JAR export option doesn't work anymore in Intelij. You can export it as a regular jar with "Jar-From module with dependencies". This will export a valid Jar, but in order to run it, you need to add your javaFx path and modules to your command.

After you have the jar, the run command should look something like this:

The following method works for me with OpenJDK 11 and OpenJFX 11 on Ubuntu using IntelliJ and successfully creates a jar that can be run with just java -jar filename.jar on Windows and Linux.

So, first make a new Java class something like Start.java - this links to the original Main method.

Then you make the .jar file;

For the Main class choose the Start.java > click Ok

Unfortunately, you won't be able to build your jar using JFX11 this way, as apparently the packager was removed from the JFX SDK. There is hope it will be implemented in a future release (maybe 12). Read here for more details:

As a temporary solution, you might simply use/downgrade to version 10 which still includes the needed packager.

As Barosanu240 answered, IntelliJ cannot currently export JavaFX Jars anymore, although development on that aspect is being carried out. Further, his solution on his YouTube video works perfectly well, so thank you for posting that.

In order to have a JAR file open without use of the command line, the application essentially needs to restart itself with the additional JVM argumemts listed above. Although messy, this can be accomplished in the following way.

Suppose the application looks for a temporary file in its current directory, named exist.txt. If this file does not exist, it creates it, sends a command to CMD to start another instance of itself with the additional JVM arguments, then closes. The newly opened instance then checks for the existence of exist.txt, and it now does exist; therefore, it knows that the UI is open and visible. It then deletes exist.txt, and the application then continues on as normal.

This methodology can be accomplished with a try/catch block, although admittedly messy, as follows.

Note that the path to your JavaFX lib folder should not contain any spaces. The above code needs to be in your application's main method, before the launch(args) line. There are probably better ways to achieve this same behaviour without use of a try/catch (as invoking exceptions purposely is not good practice), but this solution works fine for the time being.

i have the same problem , after a lot of searching i found the solution on youtube with this video , the link for the video : https://www.youtube.com/watch?v=F8ahBtXkQzU

you have to add all (.dill) files from your JavaSDKFX File on your Computer To the libs that you are going to Set in the Artifact , check the link for more obvious Info .

Not the answer you're looking for? Browse other questions tagged java intellij-idea javafx java-11 javafx-11 or ask your own question.

0
how to deploy javafx application
0
jdk11 javafx11: fx:Deploy is not available in this JDK on intelliJ
30
How to deploy a JavaFX 11 Desktop application with a JRE
9
JavaFX can't build artifact - fx:deploy is not available in this JDK
2
Cannot create JAR-File for JavaFX in Intellij
0
How to create standalone jar from javafx project in IntelliJ
0
How to make program runnable without moving Java library files to system