How to exploit any parallelism in my haskell parallel code?

I've just stated working in haskell semi-explicit parallelism with GHC 6.12. I've write the following haskell code to compute in parallel the map of the fibonnaci function upon 4 elements on a list, and in the same time the map of the function sumEuler upon two elements.

to improve my program in parallel I rewrote it with par and pseq and a forcing function to force whnf evaluation. My problem is that by looking in the threadscope it appear that i didn't gain any parallelism. Things are worse because i didn't gain any speedup.

That why I have theses two questions

Question 1 How could I modify my code to exploit any parallelism ?

Question 2 How could I write my program in order to use Strategies (parMap, parList, rdeepseq and so on ...) ?

according to his contribution

haskell parallel-processing multicore
Share
Improve this question
edited May 14 '12 at 13:17

Your parallelism is far too course-grained to have much beneficial effect. The largest chunks of work that can be done in parallel efficiently are in sumEuler, so that's where you should add your par annotations. Try changing sumEuler to:

parMap is from Control.Parallel.Strategies; it expresses a map that can be done in parallel. The first argument, rseq having type Strategy a, is used to force the computation to a specific point, otherwise no work would be done, due to laziness. rseq is fine for most numeric types.

It's not useful to add parallelism to fib here, below about fib 40 there isn't enough work to make it worthwhile.

In addition to threadscope, it's useful to run your program with the -s flag. Look for a line like:

in the output. Each spark is an entry in a work queue to possibly be performed in parallel. Converted sparks are actually done in parallel, while pruned sparks mean that the main thread got to them before a worker thread had the chance to do so. If the pruned number is high, it means your parallel expressions are too fine-grained. If the total number of sparks is low, you aren't trying to do enough in parallel.

Finally, I think parMapFibEuler is better written as:

mapEuler is simply too short to have any parallelism usefully expressed here, especially as euler is already performed in parallel. I'm doubtful that it makes a substantial difference for mapFib either. If the lists mapFib and mapEuler were longer, parallelism here would be more useful. Instead of parList you may be able to use parBuffer, which tends to work well for list consumers.

The reason you aren't seeing any parallelism here is because your spark has been garbage collected. Run the program with +RTS -s and note this line:

the spark has been "pruned", which means removed by the garbage collector. In GHC 7 we made a change to the semantics of sparks, such that a spark is now garbage collected (GC'd) if it is not referred to by the rest of the program; the details are in the "Seq no more" paper.

Why is the spark GC'd in your case? Look at the code:

the spark here is the expression forkList mapFib. Note that the value of this expression is not required by the rest of the program; it only appears as an argument to par. GHC knows that it isn't required, so it gets garbage collected.

The whole point of the recent changes to the parallel package were to let you easily avoid this bear trap. A good Rule of Thumb is to use Control.Parallel.Strategies rather than par and pseq directly. My preferred way to write this would be

but sadly this doesn't work with GHC 7.0.2, because the spark sum mapFib is floated out as a static expression (a CAF), and the runtime doesn't think sparks that point to static expressions are worth keeping (I'll fix this). This wouldn't happen in a real program, of course! So let's make the program a bit more realistic and defeat the CAF optimisation:

Now I get good parallelism with GHC 7.0.2. However, note that @John's comments also apply: generally you want to look for more fine-grained parallelism so as to let GHC use all your processors.

I.e. spawn mapFib in background and calculate mapEuler and only after it (mapEuler) do (+) of their sums. Actually I guess you can do something like:

I.e. strategy applied to tuple of two lists will force their evaulation in parallel, but each list will be forced to be evaluated sequentially.

First off, I assume you know your fib definition is awful and you're just doing this to play with the parallel package.

You seem to be going for parallelism at the wrong level. Parallelizing mapFib and mapEuler won't give a good speed-up because there is more work to compute mapFib. What you should do is compute each of these very expensive elements in parallel, which is slightly finer grain but not overly so:

Also, I originally fought using Control.Parallel.Strategies over Control.Parallel but have come to like it as it is more readable and avoids issues like yours where one would expect parallelism and have to squint at it to figure out why you aren't getting any.

Finally, you should always post how you compile and how you run code you're expecting to be parallelized. For example: 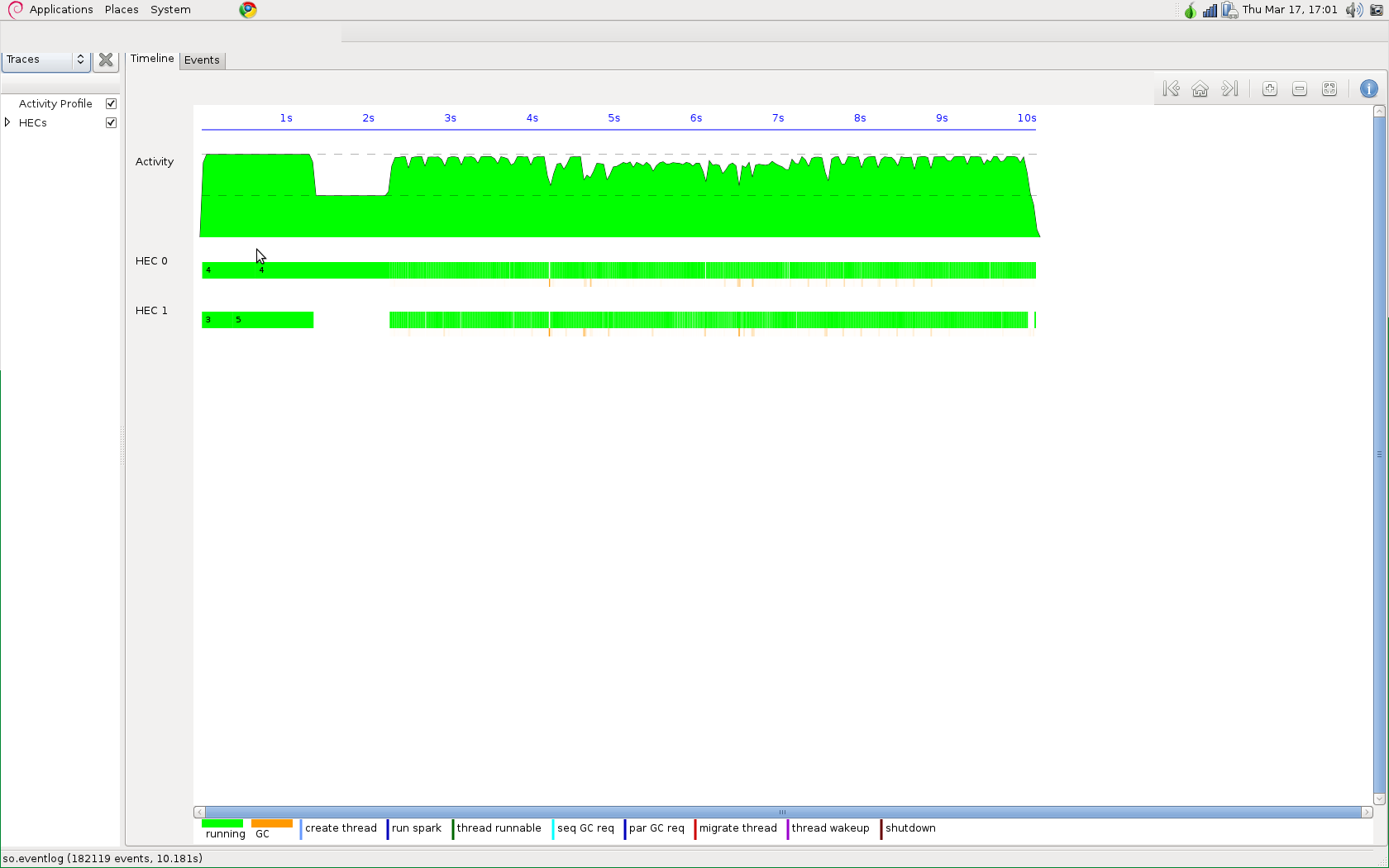 Not the answer you're looking for? Browse other questions tagged haskell parallel-processing multicore or ask your own question.

322
How do you run multiple programs in parallel from a bash script?
39
Parallel map in haskell
9
Mutable, (possibly parallel) Haskell code and performance tuning
6
Caching in Haskell and explicit parallelism
6
How to evaluate tuples in parallel using rpar Strategy in Haskell?
6
Profiling multithreading performance in a Haskell program — no speedups using parallel strategies
0
Parallelism in simple prime search function