Programming Scheme(Racket) with VIM - How to get started

recently, I started programming Racket (formerly Scheme) in DrRacket. I quite fast I began to miss all the features of VIM in DrRacket, so I would like to use VIM for my scheme(racket) programming.

I know that Emacs might be the best choice for intense lisp programming, but all I want is write a scheme(racket) file check syntax and then run it.

Unfortunately, I could not figure out, how to invoke "racket" in the commandline on a file to get it doing the same as DrRacket.

I am running Ubuntu 10.10 Maverick Meerkat, VIM 7.3 and I downloaded and installed Racket from the official website.

Help to get started would be very appreciated.

If you just want to load a file into Racket on the command-line and run it, I think that this should work:

The -i option would leave you at the REPL to test your code in file.scm.

You can set up a GNU screen session running the command-line Racket, and send s-expressions to it from Vim. There's a link to a bit of Vimscript which will make this automatic. I used this for a while with mit-scheme, and it was reasonably effective. It's not quite the as powerful as SLIME or DrRacket though. I just tested the steps described on OS X and it works with the command-line racket, it should work on Ubuntu, that's what I was using when I first used this method.

You might also want to take a look at this:

... which has some information on better indentation in Vim for Lisp and Scheme code.

I eventually switched to Emacs, but don't let the Vim haters get you down. Paul Graham supposedly uses vi and he's gotta be one of the top 5 most prominent Lisp programmers.

Several add-ons are available to make coding in Racket more satisfying with Vim.

I prefer slime over slimv for its simplicity.

If you are using Vundle, here is a way to install most of the add-ons mentioned:

Put those into your ~/.vimrc, and then invoke to install:

Here is a screenshot showing off most of these: 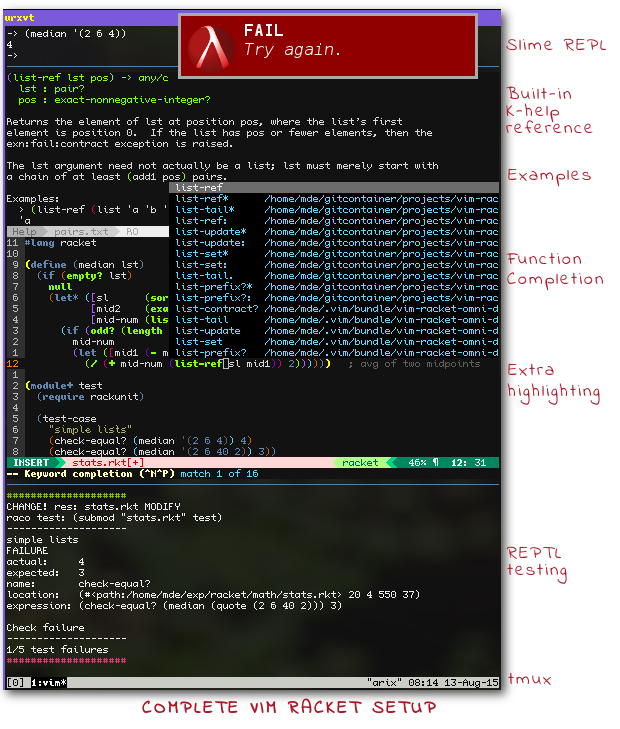 (* disclosure: I wrote VROD and REPTL, and they are immature)

As of about a week ago, SLIMV (SLIME for Vim) supports Racket. SLIMV is generally regarded as the most mature Lisp environment for Vim at the moment.

Not the answer you're looking for? Browse other questions tagged vim lisp scheme racket or ask your own question.