I have built a fully-connected neural network in both scikit-learn (v 0.20.0) and Keras (v 2.2.4) with TensorFlow backend (v 1.12.0). There are 10 units in the single hidden layer. In both cases I choose the training and test data via a call to scikit-learn's train_test_split function with random_state set to 0. They are then both scaled using scikit-learn's StandardScaler. In fact, up to this point the code for each case is literally identical.

In scikit-learn I define the neural network with MLPRegressor. The output of that function call is

Most of those parameters aren't used, but the some of the relevant parameters are that there are 200 iterations, no early stopping, a constant learning rate, solver is SGD, nesterovs_momentum=True, and momentum=0.9.

The definition in Keras is (call this Keras 1)

Where the alpha parameter should be the same as appears in scikit-learn. The code following these definitions differ only in the names of methods used by each of the API.

My results suggest that regularization is not the same in the two APIs or, more likely, my implementation in Keras is not what I think it is. Here is a comparison between the outputs of the neural networks: 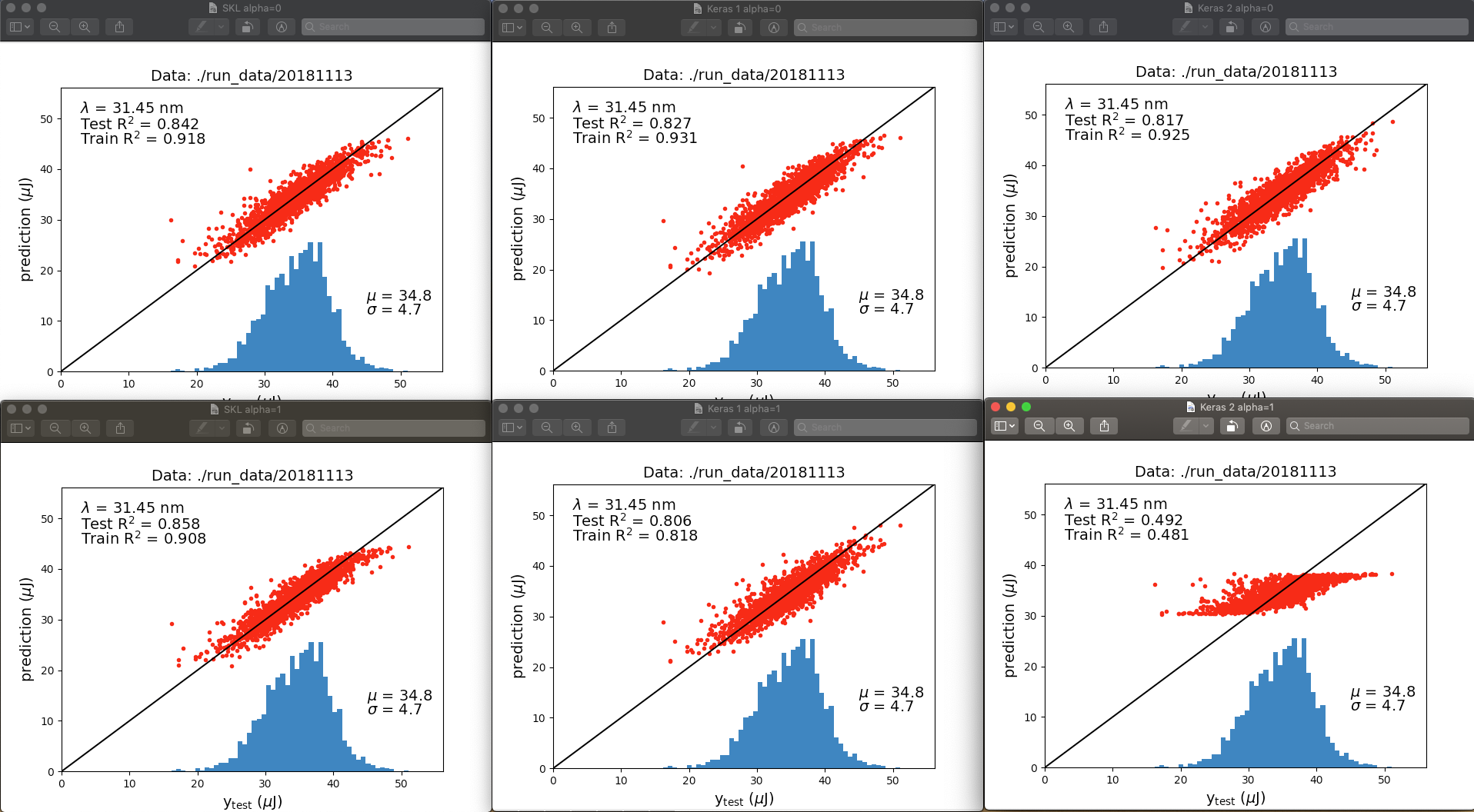 Top row is alpha = 0, bottom row is alpha = 1.0. Left column is scikit-learn, middle column is Keras 1, right column is Keras 2. Rather than discuss all the differences between the plots, what jumps out at me immediately is that when regularization is "turned off" (alpha=0) the fits are very similar. When regularization is "turned on" (alpha=1) scikit-learn outperforms Keras, especially Keras 2 when the outputs of the hidden layer are regularized.

On different runs the R^2 values vary a little but, but are not large enough to account for the differences in the bottom row. So, what is the difference between these two network implementations?

I have since found that if I use an "unbounded" activation function in Keras, the training will fail entirely returning nan for all predictions, whereas it is fine in scikit-learn. By "unbounded" I mean an activation that allows output values of infinity, for example linear/identity, softplus or relu.

When I turn on the TensorBoard callback I get an error that ends with (edited to leave out irrelevant potentially sensitive information):

Based on this error, I guess that the bias units for the second layer are getting really large, but I don't know why this would happen in Keras/TF but not scikit-learn.

Browse other questions tagged python tensorflow scikit-learn keras or ask your own question.

1472
What are the differences between type() and isinstance()?
941
What are the differences between the urllib, urllib2, urllib3 and requests module?
1
Keras: Shape Mismatch between Dense and Activation layers
2
Porting sklearn MLPClassifier to Keras with L2 regularization
1
LSTM Keras neural network representation
4
Keras: simple neural network with simple data not working
1
Keras Network Using Scikit-Learn Pipeline Resulting in ValueError
2
Different loss values and accuracies of MLP regressor in keras and scikit-learn