We've been having a few problems with XUnit Tests and Visual Studio's Test Explorer recently, and just wondering if anyone else has seen anything similar.

Sometimes the Test Explorer UI hangs, despite the fact that the Output window says that the test run has finished, but other times it doesn't even update at all: 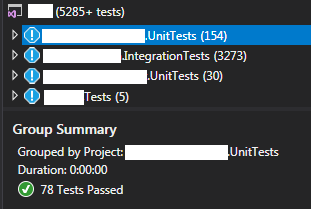 This is after running the top test project. I have no idea why only 78 tests have run (I have seen other incorrect numbers though e.g. 124), but the output window confirms that only 78 were found and run. And the main test list isn't updated and just appears as though nothing has happened.

Running the tests using vstest.console.exe outside of VS runs all 154 perfectly fine, so I'm pretty confident this is just a Test Explorer / UI issue.

Browse other questions tagged .net visual-studio xunit test-explorer or ask your own question.