Say I have for example the following nested list:

How can I group these sublists, by getting the union of sublists which have a common element with at least another sublist within the group? So for the previous example the result should be:

Thus the first two sublists are joined as they share 'John'. Could someone please share their valuable thoughts ?

In many cases, modeling a problem as a graph, can make make fairly complicated tasks much easier. In this case, what we'd be looking for from a graph theory point of view, are the connected components of the graph.

So a simple way to go about this, is to generate a graph with NetworkX, and add your list as the graph edges using add_edges_from. Then use connected_components, which will precisely give you a list of sets of the connected components in the graph:

What about sublists with multiple (>2) items?

In the case of having sublists with more than 2 elements, you can add them as paths instead of nodes using nx.add_path, since they can connect multiple nodes: 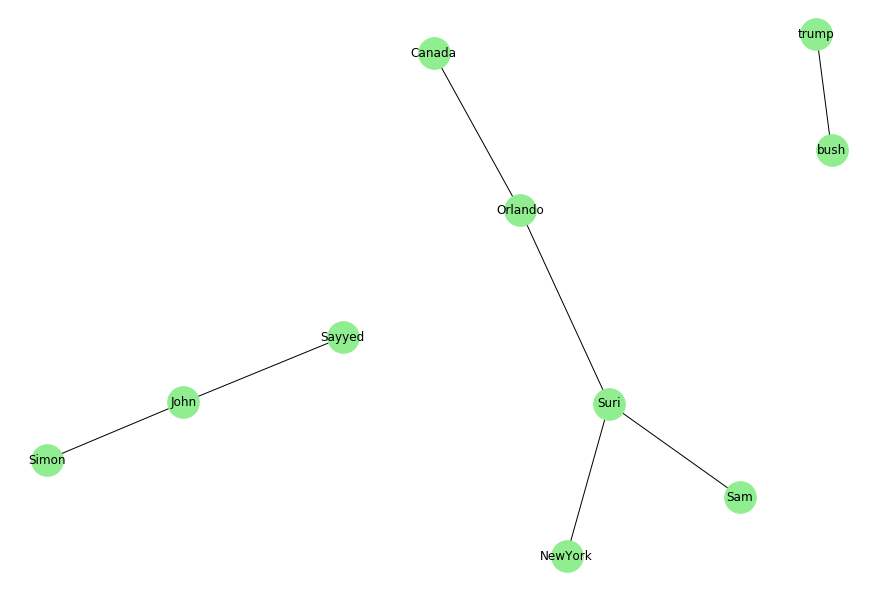 In graph theory, a connected component (or just component) of an undirected graph is a subgraph in which any two vertices are connected to each other by paths, and which is connected to no additional vertices in the supergraph

So essentially, this code creates a graph, with edges from the list, where each edge is composed by two values u,v where u and v will be nodes connected by this edge.

And hence, the union of sublists with at least one sublist with a common element can be translated into a Graph Theory problem as all nodes that are reachable between each other through the existing paths.

If order is important and the list are large, you can use this two pronged method:

To be more efficient, create a set on l1;

You can use the function connected_components in networkx:

Not the answer you're looking for? Browse other questions tagged python list networkx or ask your own question.

4
Merging sublists that contain common elements
3
Graph Relationship between list of tuples
1
Group sublists with common elements
0
Efficient way to merge two dimensional array
0
Grouping sublists based on common demoninator
0
Better than O(N^2) for Finding All Unique Unions from a List of Lists?
1
Merge sets in dictionary of sets if they contain the same element
3113
What is the difference between Python's list methods append and extend?
52
Merge lists that share common elements
5
How can I detect common elements lists and groupe lists with at least 1 common element?
See more linked questions