I have some niggling questions about factory constructors example mentioned here (https://www.dartlang.org/guides/language/language-tour#factory-constructors). I am aware of only three types of constructors on a basic level - default, named and parameterised.

tl;dr Use a factory in situations where you don't necessarily want to return a new instance of the class itself. Use cases:

A factory constructor has looser constraints than a generative constructor. The factory need only return an instance that is the same type as the class or that implements its methods (ie satisfies its interface). This could be a new instance of the class, but could also be an existing instance of the class or a new/existing instance of a subclass (which will necessarily have the same methods as the parent). A factory can use control flow to determine what object to return, and must utilize the return keyword. In order for a factory to return a new class instance, it must first call a generative constructor. 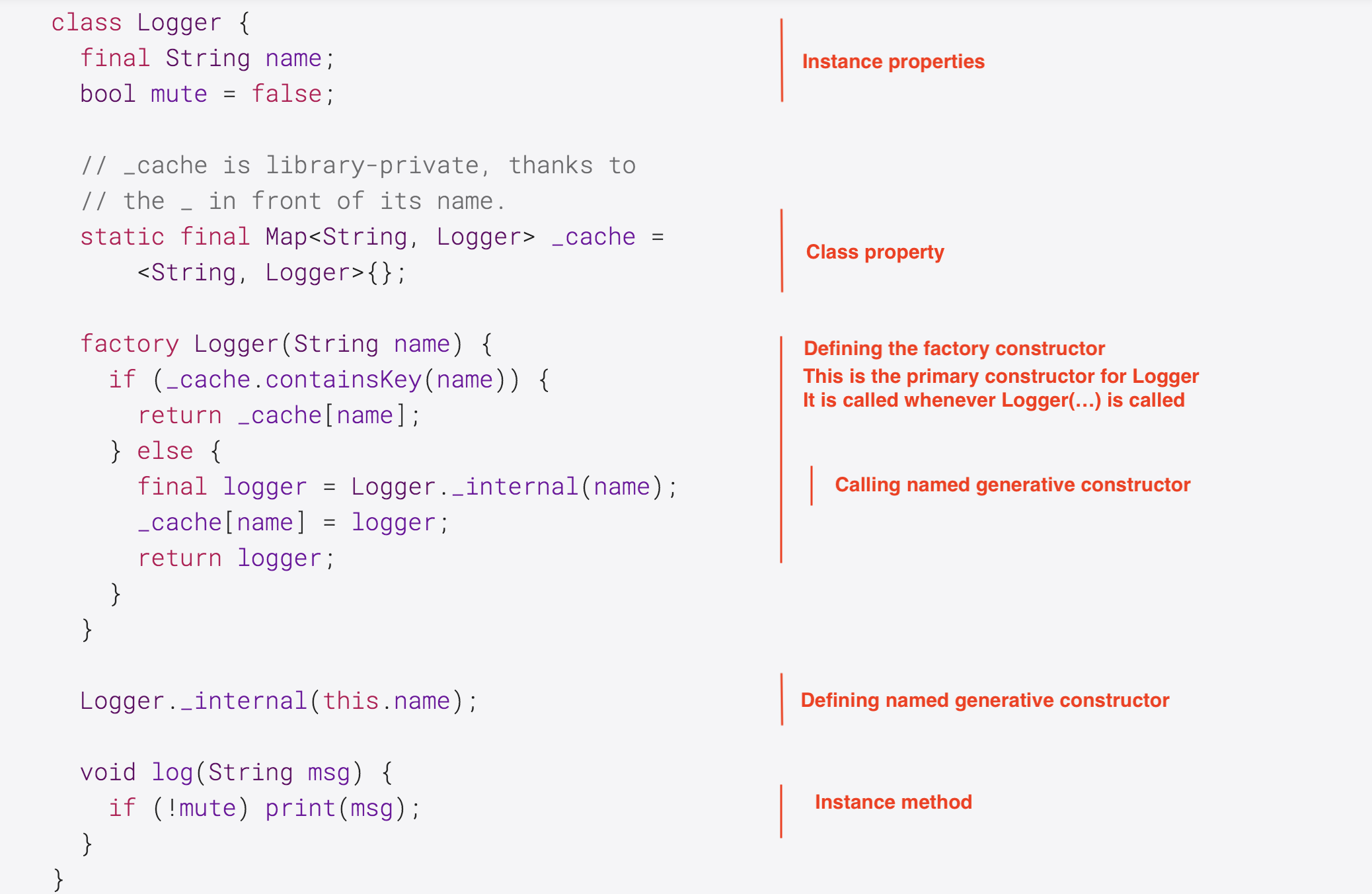 In your example, the unnamed factory constructor first reads from a Map property called _cache (which, because it is Static, is stored at the class level and therefore independent of any instance variable). If an instance variable already exists, it is returned. Otherwise, a new instance is generated by calling the named generative constructor Logger._internal. This value is cached and then returned. Because the generative constructor takes only a name parameter, the mute property will always be initialized to false, but can be changed with the default setter:

The term factory alludes to the Factory Pattern, which is all about allowing a constructor to return a subclass instance (instead of a class instance) based on the arguments supplied. A good example of this use case in Dart is the abstract HTML Element class, which defines dozens of named factory constructor functions returning different subclasses. For example, Element.div() and Element.li() return <div> and <li> elements, respectively.

In this caching application, I find "factory" a bit of a misnomer since its purpose is to avoid calls to the generative constructor, and I think of real-world factories as inherently generative. Perhaps a more suitable term here would be "warehouse": if an item is already available, pull it off the shelf and deliver it. If not, call for a new one.

How does all this relate to named constructors? Generative and factory constructors can both be either unnamed or named:

1) There is not much difference between a static method and a factory constructor.

For a factory constructor the return type is fixed to the type of the class while for a static method you can provide your own return type.

A factory constructor can be invoked with new, but that became mostly irrelevant with optional new in Dart 2.

There are other features like redirects rather rarely used that are supported for (factory) constructors but not for static methods.

It is probably still good practice to use a factory constructor to create instances of classes instead of static methods to make the purpose of object creation more obvious.

This is the reason a factory constructor is used in the example you posted and perhaps because the code was originally written in Dart 1 where it allowed to create a logger instance with new like with any other class.

It is used to prevent instance creation from anywhere else than from the public factory constructor. This way it is ensured there can't be more than one Logger instance in your application. The factory constructor only creates an instance the first time, and for subsequent calls always returns the previously created instance.

Complementing Dave's answer, this code shows a clear example when use factory to return a parent related class.

Take a look a this code from https://codelabs.developers.google.com/codelabs/from-java-to-dart/#3

Make some changes in order to learn how it would work in certain situations, like singletons.

In addition to the other answers, also consider the order of instantiating objects and when the instance is created:

In normal constructor, an instance gets created and the final variables get instantiated with the initializer list. This is why there's no return statement. The instance to return is already fixed, when executing the constructor!

In a factory constructor, the instance to return is decided by the method. That's why it needs a return statement and why it'll usually call a normal constructor in at least one path.

Not the answer you're looking for? Browse other questions tagged constructor dart or ask your own question.