Although hash values are different, still why are my objects stored in the same location?

I have a Movie class and I override only hashCode() method. Please find below the java class

I have created two Movie objects and both the object's all the property values are same and put them in a HashMap. Below is the code

I am getting the expected result. As I override only hashCode() method and both the object's hash values are same, so they are stored in the same index location of HashMap table array. Below is the expected result in debugging mode. 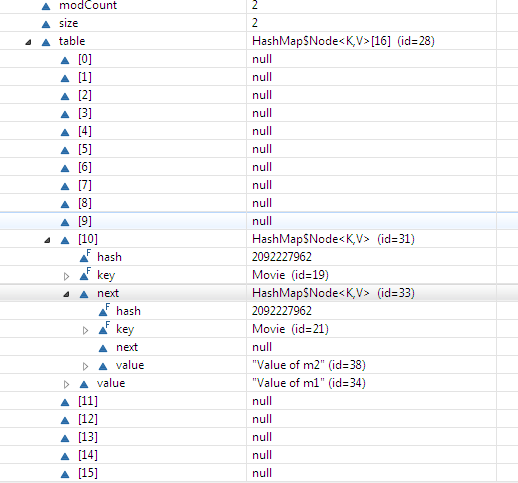 But if I do not override the hashCode() method but override the equals() method they are stored in the same index location of HashMap table array. Although I can see the hash values are different. Below is my equals method

The output in debugging mode 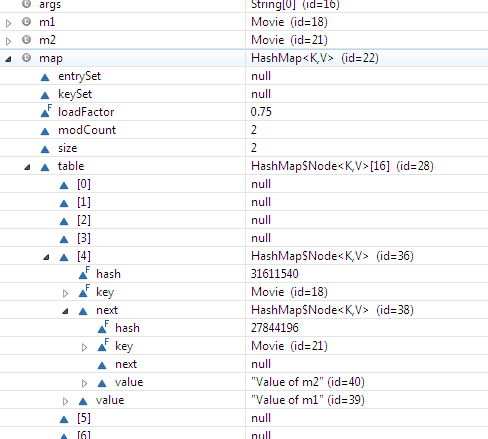 If I do not override the equals and hashCode methods then also I am getting same unexpected result.

Can some one please explain me why with different hash values, my objects stored in the same location?

Hash codes have a huge range, from Integer.MIN_VALUE to Integer.MAX_VALUE, while a HashMap usually has much fewer buckets (by default, 16 for a newly instantiated HashMap, at least with OpenJDK 11). Thus, it's entirely possible, even expected, that hash codes will collide, and multiple objects will be added to the same bucket. However, note that if you're not overriding hashCode() this behavior is completely incidental, and can't be relied upon.

No matter how the hash code is computed, by your method or by the default from the Object class, different objects can get mapped to the same hashmap bucket (array index). The hash code is divided by the array size, and the remainder gives the bucket number.

So, with 4 billion different hash codes available, some of them must end up in the same bucket, as it would be a waste of memory to allocate a 4-billion-elements array for every hash map.

To make the hash map work as expected, it's important that objects that are equal give the same hash code.

If you override only the equals() method, the Object.hashCode() doesn't fulfill that requirement, and you have to override hashCode() as well - otherwise the get() method won't find the objects you stored in the map.

If you want two movies to be equals() if their fields are equal, you should supply an appropriate hashCode() method as well the way you did.

Let's have a look at the possible overriding combinations.

Both movies are different, end up as different hash map entries, maybe in the same, maybe in different buckets.

Both movies are different, end up as different hash map entries in the same bucket. It's nonsense to invent your own hashCode() implementation if you still use the Object definition of equality.

Override both hashCode() and equals()

Both movies are equal, end up as only one hash map entry, with the later-stored value winning. This happens because the second put() finds an entry with an equal key under the hash code's bucket, and simply replaces its value part.

BIG MISTAKE! Both movies are equal, but this isn't reflected by the hashCode() computation, so it's just a matter of good luck whether the search for an existing value looks into the correct bucket.

Not the answer you're looking for? Browse other questions tagged java hashmap hashcode or ask your own question.

1172
What are the possible values of the Hibernate hbm2ddl.auto configuration and what do they do
4
Influence of HashMap optimization that caches the hash code associated with each entry to its get method
20
Are two Java objects with same hashcodes not necessarily equal?
1
OGNL setValue target is null
248
How does a Java HashMap handle different objects with the same hash code?
2
HashMap with incorrect equals and HashCode implementation
1
Why should two equal objects return equal hash codes if I don't want to use my object as a key in a hash table?
9
How do I prove that Object.hashCode() can produce same hash code for two different objects in Java?
0
If the hashcode() creates hashcode based on the address of the object, how can two different objects with same contents create the same hashcode?