Pointers and access to memory in c. Be careful [duplicate]

Ask Question
Asked 1 year, 5 months ago
Active 1 year, 3 months ago
Viewed 2k times
37
This question already has answers here:
In C, why can't an integer value be assigned to an int* the same way a string value can be assigned to a char*? (5 answers)
Why it is possible to assign string to character pointer in C but not an integer value to an integer pointer (3 answers)
Assigning strings to pointer in C Language (4 answers)
Why must int pointer be tied to variable but not char pointer? (8 answers)
Closed last year.

Still learning more C and am a little confused. In my references I find cautions about assigning a pointer that has not been initialized. They go on to give examples. Great answers yesterday by the way from folks helping me with pointers, here:

On follow up I briefly asked about the last iteration of the loop and potentially pointing the pointer to a non-existent place (i.e. because of my references cautioning against it). So I went back and looked more and find this:

If you have a pointer

then use it without initializing it (i.e. I take this to mean without a statement like *pt= &myVariable):

you could end up with a real bad day depending on where in memory this pointer has been assigned to. The part I'm having trouble with is when working with a string of characters something like this would be ok:

Where the reference says, "Don't worry about where in the memory the string is allocated; it's handled automatically by the compiler". So no need to say initialize *str = &str[0]; or *str = str;. Meaning, the compiler is automatically char str[n]; in the background?

Why is it that this is handled differently? Or, am I completely misunderstanding?

You're initializing str to contain the address of the given string literal. You're not actually dereferencing anything at this point.

This is also fine:

Because you're assigning to str and not actually dereferencing it.

This is a problem:

Because pt is not initialized and then it is dereferenced.

You also can't do this for the same reason (plus the types don't match):

But you can do this:

After which you can freely use *pt.

Simplifying the string literal can be expressed as:

is logically equivalent to:

Of course literals do not have the names.

But you can't dereference the char pointer which does not have allocated memory for the actual object.

And the last one - something similar to the string literals = the compound literals:

Good job on coming up with that example. It does a good job of showing the difference between declaring a pointer (like char *text;) and assigning to a pointer (like text = "Hello, World!";).

it is essentially the same as saying:

(Just so you know, the first line can also be written as char* text;.)

So why is there no * on the second line? Because text is of type char*, and "Hello!" is also of type char*. There is no disagreement here.

Also, the following three lines are identical, as far as the compiler is concerned:

The placement of the space before or after the * makes no difference. The second line is arguably easier to read, as it drives the point home that text is a char*. (But be careful! This style can burn you if you declare more than one variable on a line!)

And since pt was never initialized, using *pt (either to assign to or to de-reference) is unsafe.

Now, the interesting part about the lines:

is that they'll compile (although possibly with a warning). That's because the compiler sees *pt as an int, and 606 as an int as well, so there's no disagreement. However, as written, the pointer pt doesn't point to any valid memory, so assigning to *pt will likely cause a crash, or corrupt data, or usher about the end of the world, etc.

It's important to realize that *pt is not a variable (even though it is often used like one). *pt just refers to the value in the memory whose address is contained in pt. Therefore, whether *pt is safe to use depends on whether pt contains a valid memory address. If pt isn't set to valid memory, then the use of *pt is unsafe.

So now you might be wondering: What's the point of declaring pt as an int* instead of just an int?

It depends on the case, but in many cases, there isn't any point.

When programming in C and C++, I use the advice: If you can get away with declaring a variable without making it a pointer, then you probably shouldn't declare it as a pointer.

Very often programmers use pointers when they don't need to. At the time, they aren't thinking of any other way. In my experience, when it's brought to their attention to not use a pointer, they will often say that it's impossible not to use a pointer. And when I prove them otherwise, they will usually backtrack and say that their code (which uses pointers) is more efficient than the code that doesn't use pointers.

(That's not true for all programmers, though. Some will recognize the appeal and simplicity of replacing a pointer with a non-pointer, and gladly change their code.)

I can't speak for all cases, of course, but C compilers these days are usually smart enough to compile both pointer code and non-pointer code to be practically identical in terms of efficiency. Not only that, but depending on the case, non-pointer code is often more efficient than code that uses pointers.

There are 4 concepts which you have mixed up in your example:

Many good explanations over here. The OP has asked

Why is it that this is handled differently?

It is a fair question, he means why, not how.

It is a design decision.

Counterexample Just to see that, for other languages, this has not to be necessarily the case, check this. There (it is Python), int constants are actually placed in memory and given an id, always. So, if you try to get the address of two different variables that were asigned the same literal, it will return the same id (since they are refereing to the same literal, already placed in memory by the Python loader). It is useful to stress that in Python, the id is equivalent to an address in the Python's abstract machine.

Each byte of memory is stored in its own numbered pigeon-hole. That number is the "address" of that byte.

When your program compiles, it builds up a data-table of constants. At run-time these are copied into memory somewhere. So upon execution, in memory is the string (here at the 100,000th byte):

The compiler has generated code, such that when the variable str is created, it is automatically initialised with the address of where that string came to be stored. So in this example's case, str -> 100000. This is where the name pointer comes from, str does not actually contain that string-data, it holds the address of it (i.e. a number), "pointing" to it, saying "that piece of data at this address".

So if str was treated like an integer, it would contain the value 100000.

So when the code defines a pointer, but without any initialisation, it could be pointing anywhere, perhaps even to memory the executable doesn't own (or owns, but can't write to).

It does not have an address. So if the code tries to dereference it, it's just pointing off anywhere in memory, and this gives indeterminate results.

But the case of:

Is perfectly valid, because the compiler has generated some space for the storage of number, and now pt contains the address of that space.

So when we use the address-of operator & on a variable, it gives us the number in memory where the variable's content is stored. So if the variable number happened to be stored at byte 100040:

We would get the output:

Similarly with string-arrays, these are really just pointers too. The address is the memory-number of the first element.

There are answers here with very good and detailed information. I will post another answer, perhaps targeting more straightly to the OP. Rephrasing it a bit:

not ok (non working case), and

So, the differences with your non-working case are three-fold:

A string variable can be declared either as an array of characters char txt[] or using a character pointer char* txt. The following illustrates the declaration and initialization of a string: 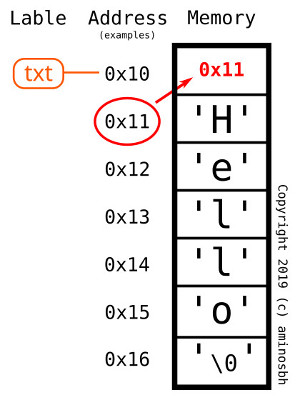 In fact, as illustrated above, txt is a pointer to the first character of the string literal.

Whether we are able to modify (read/write) a string variable or not, depends on how we declared it.

6.4.5 String literals (ISO)
6. It is unspecified whether these arrays are distinct provided their elements have the appropriate values. If the program attempts to modify such an array, the behavior is undefined.

Actually, if we declare a string txt like we previously did, the compiler will declare the string literal in a read-only data section .rodata (platform dependent) even if txt is not declared as const char*. So we can not modify it. Actually, we should not even try to modify it. In this case gcc can fire warnings (-Wwrite-strings) or even fail due to -Werror. In this cas, it is better to declare string variable as const pointers:

On the other hand, we can declare a string variable as an array of characters:

In that case, the compiler will arrange for the array to get initialized from the string literal, so you can modify it.

Not the answer you're looking for? Browse other questions tagged c pointers or ask your own question.

2
Assigning strings to pointer in C Language
5
In C, why can't an integer value be assigned to an int* the same way a string value can be assigned to a char*?
1
Why must int pointer be tied to variable but not char pointer?
4
Why it is possible to assign string to character pointer in C but not an integer value to an integer pointer
140
How to explain C pointers (declaration vs. unary operators) to a beginner?
89
print memory address of Python variable
4
Precedence, Parentheses, Pointers with iterative array functions

3260
What are the differences between a pointer variable and a reference variable in C++?
1818
What is a smart pointer and when should I use one?
182
Why is 'this' a pointer and not a reference?
1232
How do function pointers in C work?
463
C pointer to array/array of pointers disambiguation
2974
Improve INSERT-per-second performance of SQLite
455
Typedef function pointer?
540
What does “dereferencing” a pointer mean?
0
Pointer and Memory from Stanford
1597
Why should I use a pointer rather than the object itself?