I'm experiencing a strange issue when using CPU Requests/Limits in Kubernetes. Prior to setting any CPU Requests/Limits at all, all my services performed very well. I recently started placing some Resource Quotas to avoid future resource starvation. These values were set based in the actual usage of those services, but to my surprise, after those were added, some services started to increase their response time drastically. My first guess was that I might placed wrong Requests/Limits, but looking at the metrics revealed that in fact none of the services facing this issue were near those values. In fact, some of them were closer to the Requests than the Limits.

Then I started looking at CPU throttling metrics and found that all my pods are being throttled. I then increased the limits for one of the services to 1000m (from 250m) and I saw less throttling in that pod, but I don't understand why I should set that higher limit if the pod wasn't reaching its old limit (250m).

So my question is: If I'm not reaching the CPU limits, why are my pods throttling? Why is my response time increasing if the pods are not using their full capacity?

Here there are some screenshots of my metrics (CPU Request: 50m, CPU Limit: 250m):

CPU Usage (here we can see the CPU of this pod never reached its limit of 250m):

After setting limits to this pod to 1000m, we can observe less throttling

P.S: Before setting these Requests/Limits there wasn't throttling at all (as expected)

P.S 2: None of my nodes are facing high usage. In fact, none of them are using more than 50% of CPU at any time.

If you see the documentation you see when you issue a Request for CPUs it actually uses the --cpu-shares option in Docker which actually uses the cpu.shares attribute for the cpu,cpuacct cgroup on Linux. So a value of 50m is about --cpu-shares=51 based on the maximum being 1024. 1024 represents 100% of the shares, so 51 would be 4-5% of the share. That's pretty low, to begin with. But the important factor here is that this relative to how many pods/container you have on your system and what cpu-shares those have (are they using the default).

Also, not very well documented in the Kubernetes docs, but if you use Limit on a pod it's basically using two flags in Docker: --cpu-period and --cpu--quota which actually uses the cpu.cfs_period_us and the cpu.cfs_quota_us attributes for the cpu,cpuacct cgroup on Linux. This was introduced to the fact that cpu.shares didn't provide a limit so you'd spill over cases where containers would grab most of the CPU.

So, as far as this limit is concerned you will never hit it if you have other containers on the same node that don't have limits (or higher limits) but have a higher cpu.shares because they will end up optimizing and picking idle CPU. This could be what you are seeing, but again depends on your specific case.

A longer explanation for all of the above here.

The CFS is a Linux feature, added with the 2.6.23 kernel, which is based on two parameters: cpu.cfs_period_us and cpu.cfs_quota To visualize these two parameters, I'd like to borrow the following picture from Daniele Polencic from his excellent blog (https://twitter.com/danielepolencic/status/1267745860256841731): 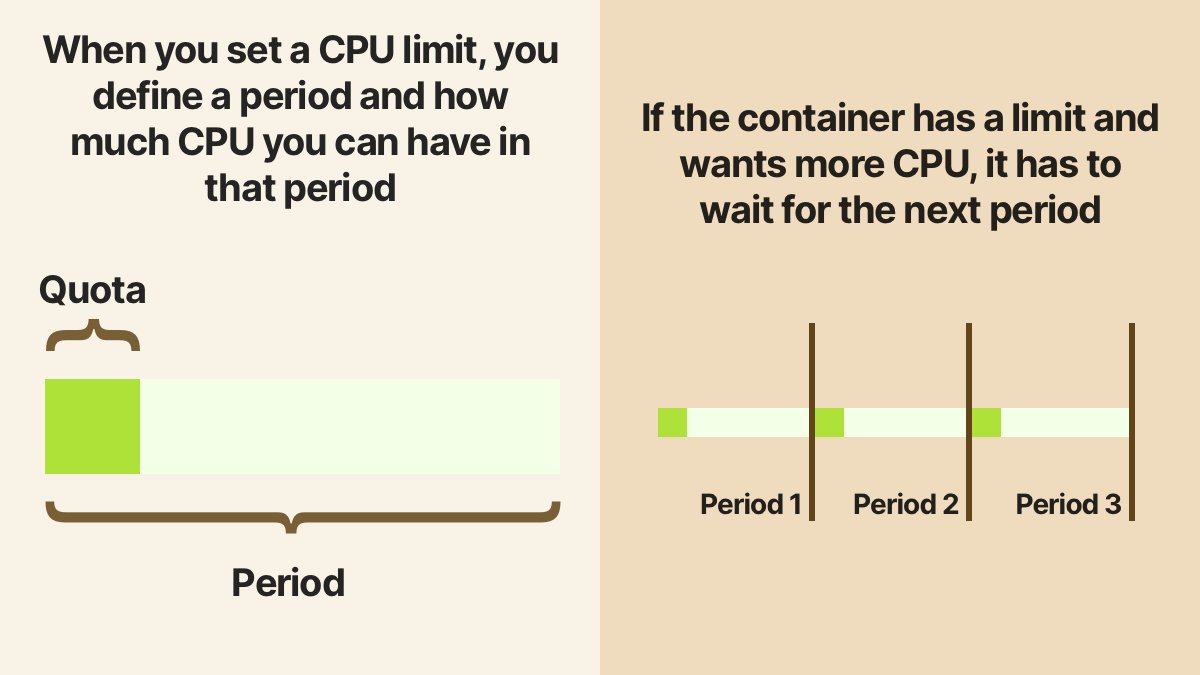 If you configure a CPU limit in K8s it will set period and quota. If a process running in a container reaches the limit it is preempted and has to wait for the next period. It is throttled. So this is the effect, which you are experiencing. The period and quota algorithm should not be considered to be a CPU limit, where processes are unthrottled, if not reached. The behavior is confusing, and also a K8s issue exist for this: https://github.com/kubernetes/kubernetes/issues/67577 The recommendation given in https://github.com/kubernetes/kubernetes/issues/51135 is to not set CPU limits for pods that shouldn't be throttled.

TLDR: remove your CPU limits. (Unless this alert fires on metrics-server in which case that wont work.) CPU limits are actually a bad-practice and not a best-practice.

I'll focus on what to do, but first let me give a quick example showing why this happens:

In a case like this you'll be throttled but the burst is so small (200 milliseconds) that it wont show up in any graphs.

You actually don't want CPU limits in most cases because they prevent pods from using spare resources. There are Kubernetes maintainers on the record saying you shouldn't use CPU limits and should only set requests.

I wrote a whole wiki page on why CPU throttling can occur despite low CPU usage and what to do about it. I also go into some common edge cases like how to deal with this for metrics-server which doesn't follow the usual rules.

Not the answer you're looking for? Browse other questions tagged kubernetes or ask your own question.