How to include my config transformation files in the web deploy zip?

Im setting up a new build and deploy pipeline in Azure Devops. It is an older Web application with some transformation files for the web.config. In the old days we would build the same code x times depending on how many environments. This this is no longer necesary as I read from here https://docs.microsoft.com/en-us/azure/devops/pipelines/tasks/transforms-variable-substitution?view=vsts#xmltransform

it looks like the deploy pipeline can pick up the changes from my transform file.

But the problem is that my other transform files does not get included in the package so I get these warning message:

And yes when i download the artifact the Web.[stage].config files are not there as suggested.

Is there some setting somewhere that let me include these files? Or stop them from being transformed?

MSBuild knows how to transform the web.config files based on the following settings/properties/parameters (in order)

I think it's typical for developers to make this happen based on build configuration only, and I believe MSBuild (and dotnet) know how to do this based on the <DependentUpon>Web.config</DependentUpon> element in the Web.[configuration].config item in the project or build script file.

Azure DevOps Release Pipelines is a little different. The pipeline wants to transform your web.config after the project has been built/published and doesn't know how to do that if MSBuild (or dotnet) has already made an attempt at it. Thus:

[warning]Unable to apply transformation for the given package. Verify the following.
[warning]1. Whether the Transformation is already applied for the MSBuild generated package during build. If yes, remove the tag for each config in the csproj file and rebuild.
[warning]2. Ensure that the config file and transformation files are present in the same folder inside the package.

Now you need to organize your release pipeline in accordance with the File Transforms and Value Substitutions documentation.

Getting your .config files to the release pipeline can happen several ways. Here are two.

Once you have the .config files available to the release pipeline

Option 2 is the route I've gone.

Here is an image of what that task looks like for me.

That task puts the config in the artifact from the build that I can then use in the release pipeline without rebuilding xx times. 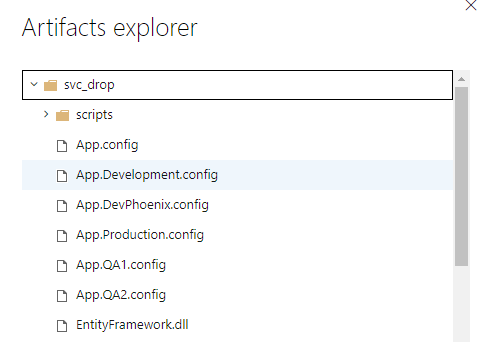 If you're in a position where you care to not have the transform files persisting on the agent after the release is complete, then you'll need to add that to your pipeline. 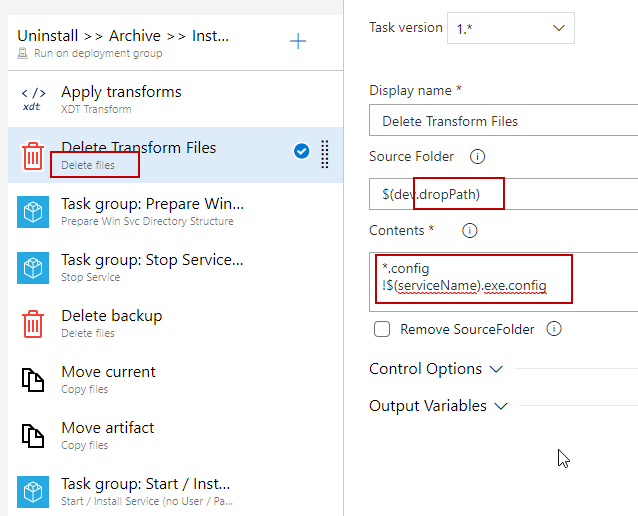