First of all, as we know, a Flink streaming job will be splitted into several tasks according to its job graph(or DAG). The FORWARD/HASH is a partitioner between the upstream tasks and downstream tasks, which is used to partition data from the input.

What is Forward? And When does Forward occur?

This means the partitioner will forwards elements only to the locally running downstream tasks. Forward is the default partitioner if you don't specify any partitioner directly or use the functions with partitioner like reblance/keyBy.

What is Hash? And When does Hash occur?

This is a partitioner that partition the records based on the key group index. It occurs when you call keyBy.

The FORWARD connection means that all data consumed by one of the parallel instances of the Source operator is transferred to exactly one instance of the subsequent operator. It also indicates the same level of parallelism of the two connected operators.

The HASH connection between DynamicKeyFunction and DynamicAlertFunction means that for each message a hash code is calculated and messages are evenly distributed among available parallel instances of the next operator. Such a connection needs to be explicitly “requested” from Flink by using keyBy. 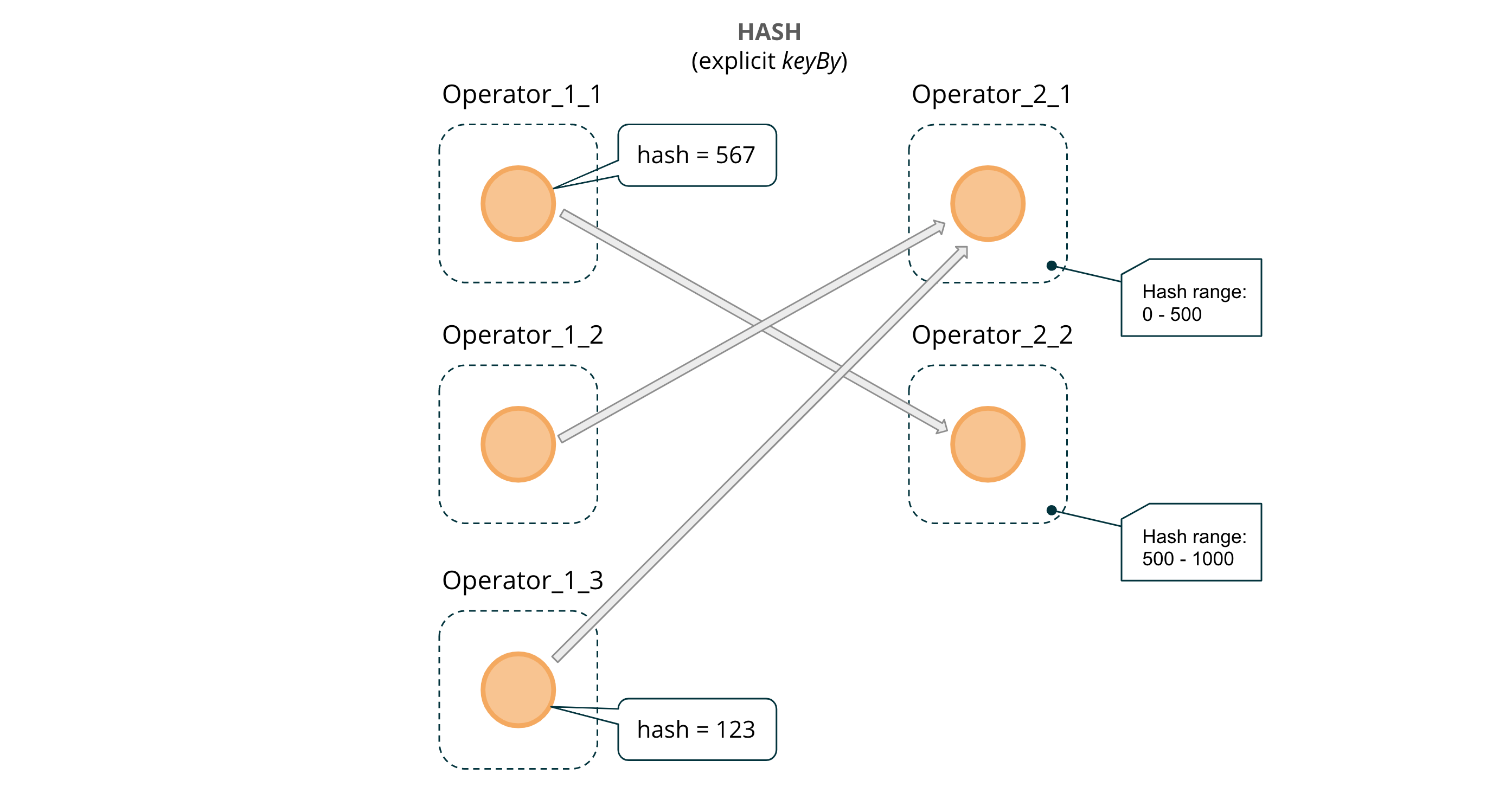 A REBALANCE distribution is either caused by an explicit call to rebalance() or by a change of parallelism (12 -> 1 in the case of the job graph from Figure 2). Calling rebalance() causes data to be repartitioned in a round-robin fashion and can help to mitigate data skew in certain scenarios.

The Fraud Detection job graph in Figure 2 contains an additional data source: Rules Source. It also consumes from Kafka. Rules are “mixed into” the main processing data flow through the BROADCAST channel. Unlike other methods of transmitting data between operators, such as forward, hash or rebalance that make each message available for processing in only one of the parallel instances of the receiving operator, broadcast makes each message available at the input of all of the parallel instances of the operator to which the broadcast stream is connected. This makes broadcast applicable to a wide range of tasks that need to affect the processing of all messages, regardless of their key or source partition.

Not the answer you're looking for? Browse other questions tagged apache-flink flink-streaming or ask your own question.

145
What is/are the main difference(s) between Flink and Storm?
3
Apache Flink creates incorrect plan
93
What are the benefits of Apache Beam over Spark/Flink for batch processing?
0
Flink: Table API copy operators in execution plan
1
Naming operators, sources, sinks and patterns to be shown in Flink Execution Plan UI
0
How to I relate the metrics in Datadog with execution plan operators in Flink?
0
What do the different numbers and colors on the Flink dashboard represent?
7
Apache Flink: What's the difference between side outputs and split() in the DataStream API?
0
Apache flink - Limit the amount of metrics exposed
0
What should you do to gracefully release all the resources when restart a flink job/job is doing a failover?