Installing Docker on windows 10 Home, can it be done?

Docker requires win 10 pro because it needs some virtualization extensions (HyperV and Containers). Can these requirements be fulfilled on win 10 Home?

Run in a command prompt as administrator:

There is now a better way to run Docker on Windows 10 Home edition.

The next version of Docker for Windows runs on WSL 2 and MS has made an exception for WSL 2, allowing it to use hyper-V even on Home editions of Windows 10.

My justification for calling this 'better' is that this is the future of Docker on Windows because Docker inc. feels that this is a considerably better solution, as they discuss in their announcements about this new version.

But if you want to take advantage of this solution now (pre-2019H2 Windows update) you will need to install an insiders edition of Windows in order to use the WSL 2 preview and then install the preview of the new Docker.

Windows 10, version 2004 is now GA so I thought I would add to this. The above still holds true, but here are some new resources...

https://arstechnica.com/gadgets/2020/06/whats-new-in-windows-10-build-2004/
And scroll down to 'Windows Subsystem for Linux, version 2' for a good short discussion.

And an updated link to the Docker install...
Install Docker Desktop Stable 2.3.0.2 (or later).
https://docs.docker.com/docker-for-windows/wsl/

Legacy desktop solution. Docker Toolbox is for older Mac and Windows systems that do not meet the requirements of 'Docker Desktop for Mac' and 'Docker Toolbox on Windows'. We recommend updating to the newer applications, if possible.

As per documentation, the toolbox includes these Docker tools:

If you want to use Docker directly within Windows, and you want to run Windows containers, there's still no official support. Docker Desktop won't allow it; it says "Windows Containers support requires a Windows 10 Pro or enterprise build >= 14372". 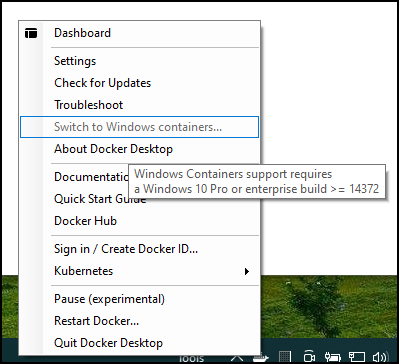 However, if you're interested in Linux containers, and you have WSL2 on your Windows 10 Home instance (which you'll have as of version 1903+), you don't need to install Docker Desktop.

(1) Setup a Linux instance via WSL2

Get into an elevated CLI prompt (CMD and PS both work fine):

If you want more info on how to control your instance(s), look at the Microsoft docs.

In general, getting "into" the default, Ubuntu instance within WSL is as easy as typing either "bash" or "ubuntu" from a regular CLI prompt. Though, I'd highly recommend installing "Windows Terminal" and using that instead.

Open up a prompt inside your Linux instance. The general instructions are here, if you need more help. I used a Ubuntu instance.

WSL2 doesn't presently have a clean way to auto-start the dockerd daemon. There's a lot of workarounds on the 'Net. Some people start it via a Scheduled task that starts dockerd via wsl. Some people start it via a smart chunk of code in either .profile or .bashrc. Soon, there's supposed to be a officially supported approach via the "[boot]" section of the /etc/wsl.conf file, but it still doesn't appear to have landed in Windows 10 20H2 as it was suggested it would.

Interactions with the Windows host