I have an issue with deletion in Entity Framework. In short, EF explicitly tries to delete an entity from the database even though I've explcitly configured EF to use cascading deletes in the database.

My problem is that EF explictly issues a DELETE statement for EntityTypeA, which causes my application to crash.

The relations have the following non-default config:

When I call SaveChanges, Entity Framework executes the following in the database:

This causes an foreign key violation, because there are items in EntityTypeB's table referencing EntityTypeA instances.

This is exactly how cascading deletes behaves in EF. Setting Cascade on a relation in EF designer instructs EF to execute DELETE statement for each loaded realated entity. It doesn't say anything about ON CASCADE DELETE in the database.

The implementation of cascade deletes in EF is strange and quite inefficient but this is how it behaves and if you want to use it, you must modify your application to behaves correctly in this scenario.

Instead of on the EF designer, one can also set cascade deletion on the FK Constraints in the database.

Here are the visual steps from Sql Server Management Studio (SSMS) on how to setup cascading deletes.

Note when done, don't forget to update the edmx against the database before attempting a delete. 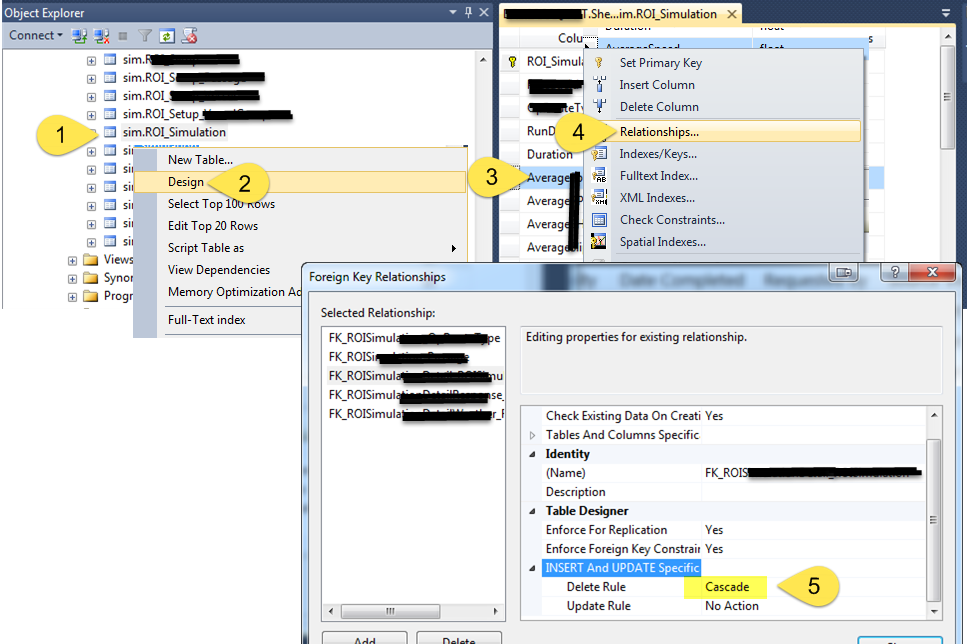 I discuss this in more depth on my blog: Entity Framework Cascading Deletes; Set it from the database.

Not the answer you're looking for? Browse other questions tagged entity-framework cascading-deletes or ask your own question.

26
Entity framework code first delete with cascade
1
Deleting multiple records for a related table
4
Entity Framework does not cascade delete child entities
4
UnitOfWork / Repository design pattern and Entity Frameworks cascading delete
0
easy way to magically generate the update and insert stored procedures when you override the delete
1
How to pass DbContext (EntityFramework SqlConnection) to another Method?
1
Entity Framework OnDelete Event for Cascade
0
Why must I access the related fields of a user before I can delete them in ASP.NET MVC EF app?
0
Deleting record along with child records
0
Delete records from relationship tables in entity framework
See more linked questions