How can I get rid of an "unused variable" warning in Xcode?

I understand exactly why unused variable warnings occur. I don't want to suppress them in general, because they are incredibly useful in most cases. However, consider the following (contrived) code.

Xcode reports that saved is an unused variable, when of course it isn't. I suspect this is because NSAssert1 is a macro. The NS_BLOCK_ASSERTIONS macro is not defined, so Objective C assertions are definitely enabled.

While it doesn't hurt anything, I find it untidy and annoying, and I want to suppress it, but I'm not sure how to do so. Assigning the variable to itself gets rid of the compiler warning, but I'd rather do it the "right" way if such a thing exists.

I'm unsure if it's still supported in the new LLVM compiler, but GCC has an "unused" attribute you can use to suppress that warning:

Alternatively (in case LLVM doesn't support the above), you could split the variable declaration into a separate line, guaranteeing that the variable would be "used" whether the macro expands or not:

Using Xcode 4.3.2 and found out that this seems to work (less writing)

In Xcode you can set the warnings for "Unused Variables." Go to "Build Settings" for the target and filter with the word "unused" 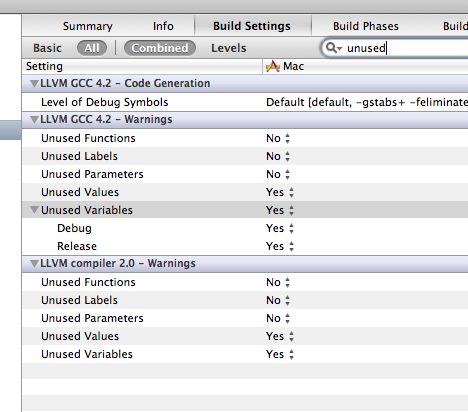 I suggest you only change it for Debug. That way you don't miss anything in your release version.

Try like this. It is working for me. It will work for you, too.

The only simple and portable way to mark variable as used is… to use it.

You may be happy with already described compiler-specific extensions, though.

This is the way you do it in C and therefore also Objective-C.

EDIT: Compilers ignore casts to void, so it should not affect performance – it's just a nice clean human annotation.

You can set "No" LLVM compliler 2.0 warning on "Release"

Make it take up two lines. Separate the declaration and default value

Not the answer you're looking for? Browse other questions tagged objective-c xcode compiler-warnings unused-variables or ask your own question.

616
How can I indent multiple lines in Xcode?
1767
How can I make a UITextField move up when the keyboard is present - on starting to edit?
459
How do I set up NSZombieEnabled in Xcode 4?
502
Xcode warning: "Multiple build commands for output file"
1461
How to "add existing frameworks" in Xcode 4?
1364
How can I disable ARC for a single file in a project?
980
How to download Xcode DMG or XIP file?
7
Disable one unused variable warning
375
How to disable unused code warnings in Rust?
506
How to update Xcode from command line