I'm trying to find and replace some function calls in py program. The idea is to add some boolean parameter to each call found on the project. I looked for solutions on the internet 'cause I don't know regex science at all... It seems like a basic exercice for regex guys but still.

In my case I have this call in a lot of files :

My gooal is to find and replace this call into :

Could you help me write the regex ?

This works by defining a pattern to match the function call you would like to update:

Note that this pattern captures two things using ( and ). The ("test") is the second of these.

Between the first and second slashes comes the pattern we have just discussed. Between the second and third slashes comes the replacement text Sed uses to replace the matched part of any line of your program text that matches the pattern. Within the replacement text, the \1 and \2 are backreferences that place the text earlier captured using ( and ).

So, there it is. Not only have I helped you to write the regex but have shown you how the regex works so that, next time, you can write your own.

you could use this regex to match and capture

then use the regex below to replace 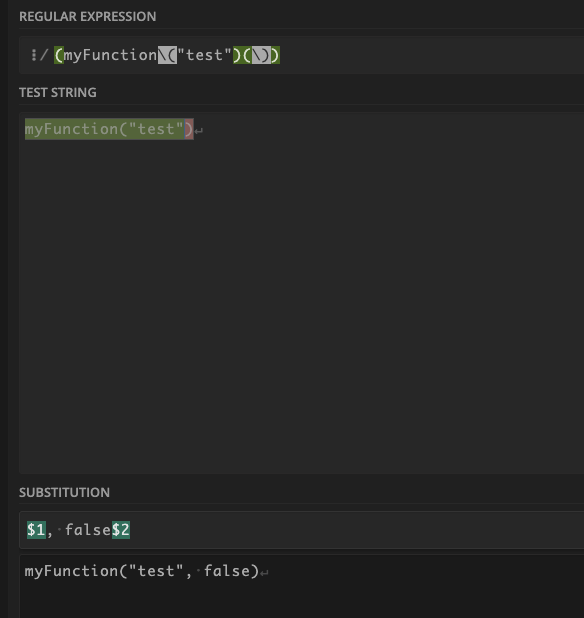 605
How to match all occurrences of a regex
959
How to validate phone numbers using regex
1664
RegEx match open tags except XHTML self-contained tags
582
Regex to replace multiple spaces with a single space
696
Find and kill a process in one line using bash and regex
858
Check whether a string matches a regex in JS
253
VSCode regex find & replace submatch math?