I am getting this error message when I try to compile my new modularized Java 11 application:

This appears to be an issue from a dependency of a dependency. I can't even find which module is pulling it in so I can update it.

Any advice how I can troubleshoot or fix this? I have found very little documentation on this issue.

I had a look at their bug tracker following their index page and wasn't able to find this reported and not sure how actively is the library being maintained either.

Just to explain what has caused the issue in your code, I would share a screenshot and then try to add details around it. 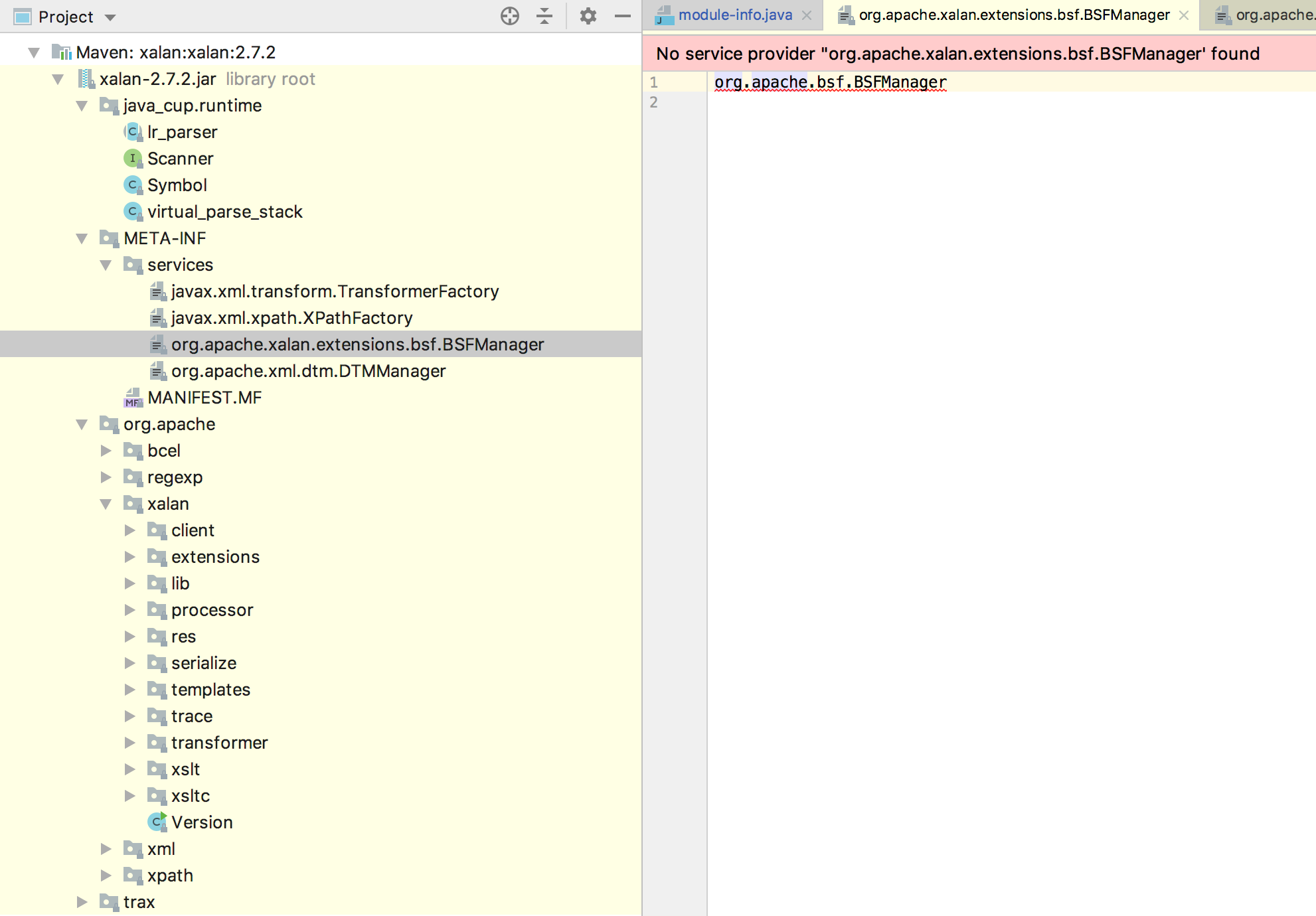 So within the JAR that for version 2.7.2, there are service declarations (META-INF/services) which include org.apache.xalan.extensions.bsf.BSFManager as one of them. The service file here has to indicate the Provider thereby for itself and the class is supposed to be present(modulepath or unnamed module) to be resolved for reliable configuration of modules.

In this case for the module xalan(automatic module), the service listed doesn't have the provider class packaged within the dependency itself. (See the package org.apache, it doesn't further have package bsf and the class BSFManager thereby. Hence the exception as you get.

One of the tweaks to get that resolved would be to get update the library jar (patch it) and get rid of the service file if you're not using it.

An ideal way would be reporting this to the maintainers and getting it resolved if they are actively maintaining it (the last release was almost 5 years back, might just want to look for a better alternative IMHO).

I tried to install update for TestNG in eclipse: "Help -> Check for updates -> deselect all and select TestNG check box. Then
install latest version i installed the version which starts with 7.2.0.

It fixed the issue for me.

Not the answer you're looking for? Browse other questions tagged java maven java-11 java-module serviceloader or ask your own question.

3943
What are the differences between a HashMap and a Hashtable in Java?
7030
Is Java “pass-by-reference” or “pass-by-value”?
3543
How do I efficiently iterate over each entry in a Java Map?
3342
What is the difference between public, protected, package-private and private in Java?
4185
Avoiding NullPointerException in Java
4317
How do I read / convert an InputStream into a String in Java?
3286
When to use LinkedList over ArrayList in Java?
3717
How do I generate random integers within a specific range in Java?
3203
How do I convert a String to an int in Java?
3416
How can I create a memory leak in Java?