If new-tip-commit is omitted, it defaults to the current commit.

new-tip-commit can be a branch name (e.g., master, origin/master).

You can do it for arbitrary refs. This is how to move a branch pointer:

where -m adds a message to the reflog for the branch.

The general form is

You can pick nits about the reflog message if you like - I believe the branch -f one is different from the reset --hard one, and this isn't exactly either of them.

You can also pass git reset --hard a commit reference.

Just to enrich the discussion, if you want to move myBranch branch to your current commit, just omit the second argument after -f

I generally do this when I rebase while in a Detached HEAD state :)

Git 2.23.0 introduced the git-switch command that can also be used to do this.

The -C (uppercase C) option indicates that if <branch-name> already exists, it will reset it to <start-point>.

With -c (lowercase C) it will try to create a new branch but fails if one already exists.

<start-point> can be a hash, a tag, or another branch name.

Beware that re-creating instead of modifying the existing branch will lose tracking-branch information. (This is generally not a problem for simple use-cases where there's only one remote and your local branch has the same name as the corresponding branch in the remote. See comments for more details, thanks @mbdevpl for pointing out this downside.)

It would be cool if gitk had a feature where the dialog box had 3 options: overwrite, modify existing, or cancel.

Even if you're normally a command-line junkie like myself, git gui and gitk are quite nicely designed for the subset of git usage they allow. I highly recommend using them for what they're good at (i.e. selectively staging hunks into/out of the index in git gui, and also just committing. (ctrl-s to add a signed-off: line, ctrl-enter to commit.)

gitk is great for keeping track of a few branches while you sort out your changes into a nice patch series to submit upstream, or anything else where you need to keep track of what you're in the middle of with multiple branches.

I don't even have a graphical file browser open, but I love gitk/git gui. 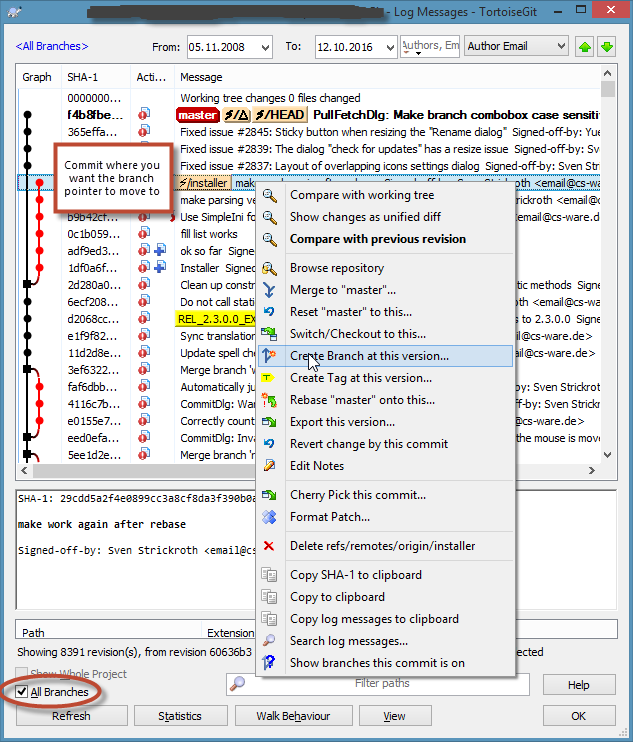 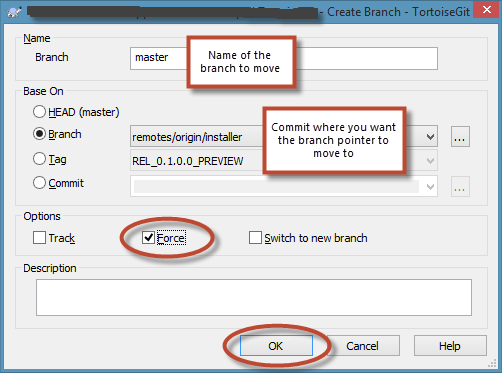 Honestly, I'm surprised how nobody thought about the git push command:

The dot ( . ) refers the local repository, and you may need the -f option because the destination could be "behind its remote counterpart".

Although this command is used to save your changes in your server, the result is exactly the same as if moving the remote branch (<branch>) to the same commit as the local branch (<destination>)

If you want to move a non-checked out branch to another commit, the easiest way is running the git branch command with -f option, which determines where the branch HEAD should be pointing to:

Be careful as this won't work if the branch you are trying to move is your current branch. To move a branch pointer, run the following command: git update-ref -m "reset: Reset to " refs/heads/

The git update-ref command updates the object name stored in a ref safely.

Hope, my answer helped you.The source of information is this snippet.

Open the file .git/refs/heads/<your_branch_name>, and change the hash stored there to the one where you want to move the head of your branch. Just edit and save the file with any text editor. Just make sure that the branch to modify is not the current active one.

Disclaimer: Probably not an advisable way to do it, but gets the job done.

This makes a softer alternative to git reset --hard, and will fail if you are not in the case described above.

To do the same thing for a non checked out branch, the equivalent would be:

345
How do I make a branch point at a specific commit?
0
How to make branch master point to commits on branch escaped?
101
Is there some kind of 'git rebase --dry-run', which would notify me of conflicts in advance?
16
Git - Make local HEAD the new master
18
Difference between `git branch -f <branch_name> <hash>` and `git checkout <branch_name>; git reset --hard <hash>` under a clean working tree?
11
How do you sync existing code existing repository using git
2
git rebase to master two feature branches on top of each other
2
Prepend a commit from master to a branch
-1
GIT - Replace a branch content with another
1
Move commits from linear history to a separate branch
See more linked questions

4045
Undoing a git rebase
1501
Default behavior of "git push" without a branch specified
4083
How do I delete a commit from a branch?
3745
Move existing, uncommitted work to a new branch in Git
5302
Reset local repository branch to be just like remote repository HEAD
6221
Move the most recent commit(s) to a new branch with Git
1740
How can I merge multiple commits onto another branch as a single squashed commit?
1727
How can I reconcile detached HEAD with master/origin?
1977
Remove tracking branches no longer on remote
3282
Git is not working after macOS Update (xcrun: error: invalid active developer path (/Library/Developer/CommandLineTools)