Which operator(s) in C have wrong precedence?

In the "Introduction" section of K&R C (2E) there is this paragraph:

C, like any other language, has its blemishes. Some of the operators have the wrong precedence; ...

Which operators are these? How are their precedence wrong?

Is this one of these cases?

Yes, the situation discussed in the message you link to is the primary gripe with the precedence of operators in C.

Historically, C developed without &&. To perform a logical AND operation, people would use the bitwise AND, so a==b AND c==d would be expressed with a==b & c==d. To facilitate this, == had higher precedence than &. Although && was added to the language later, & was stuck with its precedence below ==.

In general, people might like to write expressions such as (x&y) == 1 much more often than x & (y==1). So it would be nicer if & had higher precedence than ==. Hence people are dissatisfied with this aspect of C operator precedence.

There is a clear rule of precedence that is incontrovertible. The rule is so clear that for a strongly typed system (think Pascal) the wrong precedence would give clear unambiguous syntax errors at compile time. The problem with C is that since its type system is laissez faire the errors turn out to be more logical errors resulting in bugs rather than errors catch-able at compile time.

Apply this to C

For the most part C gets it right

However in the case of bitwise operators

When can such a grouping have a legitimate use?
I (personally) dont believe there is any

Wrong may sound a bit too harsh. Normal people generally only care about the basic operators like +-*/^ and if those don't work like how they write in math, that may be called wrong. Fortunately those are "in order" in C (except power operator which doesn't exist)

However there are some other operators that might not work as many people expect. For example the bitwise operators have lower precedence than comparison operators, which was already mentioned by Eric Postpischil. That's less convenient but still not quite "wrong" because there wasn't any defined standard for them before. They've just been invented in the last century during the advent of computers

Another example is the shift operators << >> which have lower precedence than +-. Shifting is thought as multiplication and division, so people may expect that it should be at a higher level than +-. Writing x << a + b may make many people think that it's x*2a + b until they look at the precedence table. Besides (x << 2) + (x << 4) + (y << 6) is also less convenient than simple additions without parentheses. Golang is one of the languages that fixed this by putting <</>> at a higher precedence than + and -

In other languages there are many real examples of "wrong" precedence

It depends which precedence convention is considered "correct". There's no law of physics (or of the land) requiring precedence to be a certain way; it's evolved through practice over time.

Operator precedence in programming requires more rules as there are more operators, but you can distil out how it compares to BODMAS. 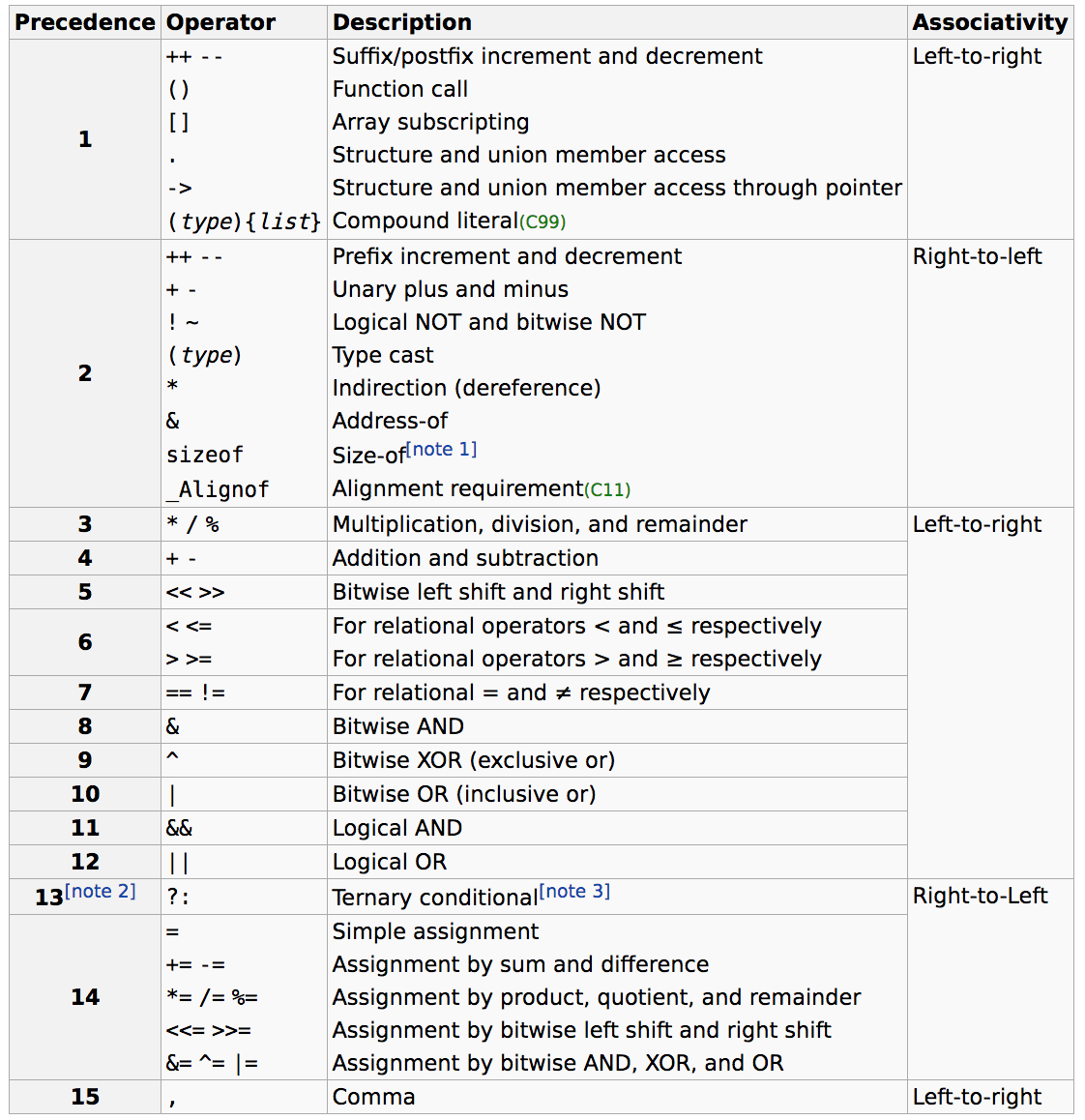 As you can see, Unary Addition and Subtraction are at level 2 - ABOVE Multiplication and Division in level 3. This can be confusing to a mathematician on a superficial reading, as can precedence around suffix/postfix increment and decrement.

To that extent, it is ALWAYS worth considering adding brackets in your mathematical code - even where syntactically unnecessary - to make sure to a HUMAN reader that your intention is clear. You lose nothing by doing it (although you might get flamed a bit by an uptight code reviewer, in which you can flame back about coding risk management). You might lose readability, but intention is always more important when debugging.

And yes, the link you provide is a good example. Countless expensive production errors have resulted from this.

Not the answer you're looking for? Browse other questions tagged c operators operator-precedence or ask your own question.