How do I make a WPF window movable by dragging the extended window frame?

In applications like Windows Explorer and Internet Explorer, one can grab the extended frame areas beneath the title bar and drag windows around.

For WinForms applications, forms and controls are as close to native Win32 APIs as they can get; one would simply override the WndProc() handler in their form, process the WM_NCHITTEST window message and trick the system into thinking a click on the frame area was really a click on the title bar by returning HTCAPTION. I've done that in my own WinForms apps to delightful effect.

In WPF, I can also implement a similar WndProc() method and hook it to my WPF window's handle while extending the window frame into the client area, like this:

The problem is that, since I'm blindly setting handled = true and returning HTCAPTION, clicking anywhere but the window icon or the control buttons causes the window to be dragged. That is, everything highlighted in red below causes dragging. This even includes the resize handles at the sides of the window (the non-client area). My WPF controls, namely the text boxes and the tab control, also stop receiving clicks as a result: 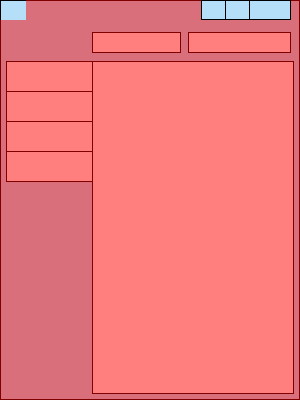 What I want is for only 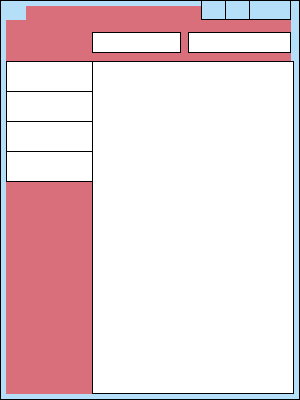 How do I modify my WndProc() method and the rest of my window's XAML/code-behind, to determine which areas should return HTCAPTION and which shouldn't? I'm thinking something along the lines of using Points to check the location of the click against the locations of my controls, but I'm not sure how to go about it in WPF land.

EDIT [4/24]: one simple way about it is to have an invisible control, or even the window itself, respond to MouseLeftButtonDown by invoking DragMove() on the window (see Ross's answer). The problem is that for some reason DragMove() doesn't work if the window is maximized, so it doesn't play nice with Windows 7 Aero Snap. Since I'm going for Windows 7 integration, it's not an acceptable solution in my case.

Thanks to an email I got this morning, I was prompted to make a working sample app demonstrating this very functionality. I've done that now; you can find it on GitHub (or in the now-archived CodePlex). Just clone the repository or download and extract an archive, then open it in Visual Studio, and build and run it.

The complete application in its entirety is MIT-licensed, but you'll probably be taking it apart and putting bits of its code around your own rather than using the app code in full — not that the license stops you from doing that either. Also, while I know the design of the application's main window isn't anywhere near similar to the wireframes above, the idea is the same as posed in the question.

Hope this helps somebody!

I finally solved it. Thanks to Jeffrey L Whitledge for pointing me in the right direction! EDIT [9/8]: this answer is now accepted as it's more complete; I'm giving Jeffrey a nice big bounty instead for his help.

For posterity's sake, here's how I did it (quoting Jeffrey's answer where relevant as I go):

Get the location of the mouse click (from the wParam, lParam maybe?), and use it to create a Point (possibly with some kind of coordinate transformation?).

Then call the static method VisualTreeHelper.HitTest(Visual,Point) passing it this and the Point that you just made. The return value will indicate the control with the highest Z-Order.

I had to pass in the top-level Grid control instead of this as the visual to test against the point. Likewise I had to check whether the result was null instead of checking if it was the window. If it's null, the cursor didn't hit any of the grid's child controls — in other words, it hit the unoccupied window frame region. Anyway, the key was to use the VisualTreeHelper.HitTest() method.

Now, having said that, there are two caveats which may apply to you if you're following my steps:

The window is now movable by clicking and dragging only the unoccupied areas of the window.

But that's not all. Recall in the first illustration that the non-client area comprising the borders of the window was also affected by HTCAPTION so the window was no longer resizable.

To fix this I had to check whether the cursor was hitting the client area or the non-client area. In order to check this I needed to use the DefWindowProc() function and see if it returned HTCLIENT:

Here's something you could try:

Get the location of the mouse click (from the wParam, lParam maybe?), and use it to create a Point (possibly with some kind of coordinate transformation?).

Then call the static method VisualTreeHelper.HitTest(Visual,Point) passing it this and the Point that you just made. The return value will indicate the control with the highest Z-Order. If that's your window, then do your HTCAPTION voodoo. If it's some other control, then...don't.

Looking to do the same thing (make my extended Aero glass draggable in my WPF app), I just came across this post via Google. I read through your answer, but decided to keep searching to see if there was anything simpler.

I found a much less code-intensive solution.

Simply create a transparent item behind your controls, and give it a left mouse button down event handler which calls the window's DragMove() method.

Here's the section of my XAML which appears over my extended Aero glass:

And the code-behind (this is within a Window class, and so DragMove() is available to call directly):

And that's it! For your solution, you would have to add more than one of these to achieve your non-rectangular draggable area.

Not the answer you're looking for? Browse other questions tagged c# .net wpf winapi windows-7 or ask your own question.

45
How to Extend Twitter Bootstrap Plugin
22
Get the active color of Windows 8 automatic color theme
6
Events rather than Commands in MVVM?
8
Detect system theme change in WPF
1
WPF. MVVM. Using events is a bad tone?
2
Window.DragMove() causes the window to freeze temporarily if holding down the mouse left button without moving the cursor
1
Click event not raised in expanded glass area?

724
What is the correct way to create a single-instance WPF application?
638
How do I use WPF bindings with RelativeSource?
5
How do I move a wpf window into a negative top value?
640
In WPF, what are the differences between the x:Name and Name attributes?
1541
How do I update the GUI from another thread?
5
C# WPF toolkit: How can I make a cell from a datagrid be editable?
1935
How do I remedy "The breakpoint will not currently be hit. No symbols have been loaded for this document." warning?
542
How do I exit a WPF application programmatically?
131
Make WPF window draggable, no matter what element is clicked
0
WPF Window Titlebar