Can you suggest such DS(main structs or classes and what will be in them). I know that an Adjacency list and Adjacency matrix are the main possibilities, but I mean a more detailed code sample.

For example I thought about this DS last time I had to implement a graph for DFS:

and then used a array of size n containing in its i'th place the Edge List(struct Edge) representing the edges starting in the i'th node.

but when trying to DFS on this graph I had to write a 50 line code with about 10 while loops.

What 'good' implementations are there?

Below is a implementation of Graph Data Structure in C++ as Adjacency List.

I have used STL vector for representation of vertices and STL pair for denoting edge and destination vertex.

It really depends on what algorithms you need to implement, there is no silver bullet (and that's shouldn't be a surprise... the general rule about programming is that there's no general rule ;-) ). 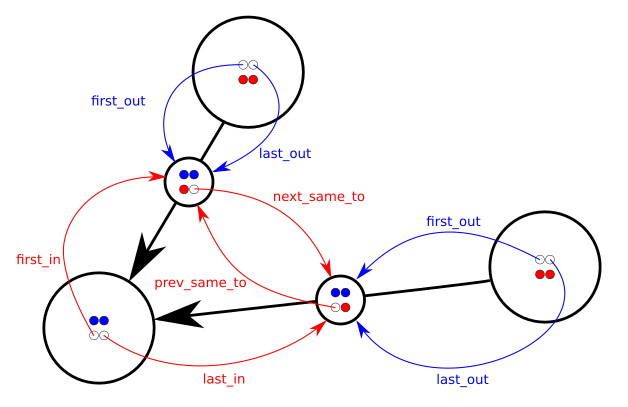 It's a lot of pointer twiddling (so unless you love pointers just forget about this) but query and update operations are efficient; for example adding a node or a link is O(1), removing a link is O(1) and removing a node x is O(deg(x)).

Of course depending on the problem, payload size, graph size, graph density this approach can be way overkilling or too much demanding for memory (in addition to payload you've 4 pointers per node and 6 pointers per link).

A similar structure full implementation can be found here.

This question is ancient but for some reason I can't seem to get it out of my mind.

While all of the solutions do provide an implementation of graphs, they are also all very verbose. They are simply not elegant.

Instead of inventing your own graph class all you really need is a way to tell that one point is connected to another -- for that, std::map and std::unordered_map work perfectly fine. Simply, define a graph as a map between nodes and lists of edges. If you don't need extra data on the edge, a list of end nodes will do just fine.

Thus a succinct graph in C++, could be implemented like so:

Or, if you need additional data,

No benchmarks, but I have a feeling this will also outperform the other suggestions here.

NB: the ints are not indices -- they are identifiers.

The most common representations are probably these two:

Of these two the adjacency matrix is the simplest, as long as you don't mind having a (possibly huge) n * n array, where n is the number of vertices. Depending on the base type of the array, you can even store edge weights for use in e.g. shortest path discovery algorithms.

I prefer using an adjacency list of Indices ( not pointers )

There can be an even simpler representation assuming that one has to only test graph algorithms not use them(graph) else where. This can be as a map from vertices to their adjacency lists as shown below :-

Here is a basic implementation of a graph. Note: I use vertex which is chained to next vertex. And each vertex has a list pointing to adjacent nodes.

With the above code, you can expand to do DFS/BFS etc.

Not the answer you're looking for? Browse other questions tagged c++ graph or ask your own question.