How can I determine what causes repeated Windows Installer self-repair?

Self-Repair, Simple & Short Explanation: Why does the MSI installer reconfigure if I delete a file?

UPDATE: There is a shorter, more "solution focused" answer available, perhaps try it first. This answer focuses on "understanding self-repair" rather than explaining the steps to take to eliminate the problem. You might want to read the first section of this answer as well.

The rest of the "article" describes self-repair problems in depth. There are many other potential causes of self-repair than what is described in this "short" section.

Windows Installer is a deployment technology, its job is to install the specified files and registry settings and keep them in the specified install locations and to ensure they are the right versions - self-repair or resiliency is a mechanism to that end. Its operation conflicts with a developers need to exchange files on the fly for debugging, development and testing.

Accordingly, many self-repairs (resiliency) are triggered simply by developers trying to debug their installed application and hot-swapping files on the fly. See section 2 in "Some typical self-repair problem scenarios" below for how to handle this. In other cases there are genuine design errors in the MSI that must be corrected or system administration pitfalls that lead into self-repair - and at times the error source can be hard to find.

I have written about the issue of self-repair in an answer on serverfault.com. Slightly different words intended for system administrators, and reading it now it might be a more accessible explanation than this long one (intended for developers). There is also another, shorter answer here on stackoverflow: Why does the MSI installer reconfigure if I delete a file? (this is probably the shortest one and easiest to understand). And finally I found a very nice article on self-repair by Vadim Rapp: How to fix Windows Installer Efforts to Self-Repair. This article is well worth a read.

No self-repair will occur if Windows Installer determines that the product being launched is properly installed. When self-repair occurs something needs to be changed on the system for the application to run properly.

The Primary Causes of Self-Repair

The details are presented below in the section "Some typical self-repair problem scenarios", but as a quick, foreshadowing list - the primary causes are:

1. Badly packaged corporate MSI files or MSI design flaws from the vendor (the MSI package itself is badly designed and triggers self-repair unexpectedly for a variety of reasons)

Windows Installer is designed to install your application's binaries, settings- and data files and keep them installed and ensure they are the right versions. Self-repair is a mechanism to that end. The overall concept is called resiliency - i.e. a broken installation triggers a self-repair before the application is launched.

Resiliency, or self-repair, is a built-in primary concept of Windows Installer and can not be turned off in any way that is safe. People do the most incredible things sometimes, such as disabling the whole Windows Installer engine to stop their self-repair. This must obviously never be done. The cause of the repair must be identified, and the problem resolved rather than creating new ones, or hacking the system.

Every time you launch an advertised shortcut (essentially a special shortcut that points to a Windows Installer feature and not directly to a file), Windows Installer will verify the installation by checking the "component key paths" for your product. If a discrepancy is found, a repair is triggered to correct the incomplete installation. The "component key paths" are the "key files" specified for the components inside your MSI - there is one per component. Self-repair can also be initiated by someone instantiating a COM server (or attempting to), someone activating a file via its file extension or MIME registration, and a few other ways. Here is a comprehensive article from Symantec on the subject of "self-repair entry points": Initiating Self-Repair and Advertising Features with Entry Point.

If files are deleted, moved or simply overwritten (manually by a user or somehow automatically), self-repair may result (if the file or registry setting isn't set as a key path self-repair is not triggered).

Finding the trigger or culprit for the self-repair

Alternatively you can do: Start => Run... => eventvwr.exe for just the event viewer. If you don't see run in the start menu, press WINKEY + R. 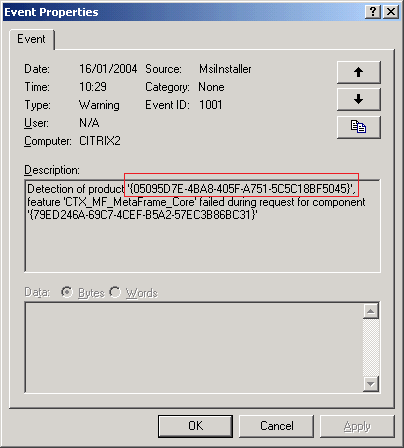 MSI-expert and MVP Stefan Krüger has an article about the same self-repair issue. And he crucially discusses the actual event log entries and what they mean. Please read about the actual debugging procedure there.

This is the "verbose explanation" of several self-repair problem scenarios already outlined in the overview above.

Finally there are benign uses for self-repair that happen once and do not constitute errors. This is the legal and proper use of self-repair though it may be just as annoying as the design errors, and with user intervention they can pop up again and again:

Not the answer you're looking for? Browse other questions tagged wix installation windows-installer installshield resiliency or ask your own question.

82
How can I find the product GUID of an installed MSI setup?
80
What installation product to use? InstallShield, WiX, Wise, Advanced Installer, etc
24
What is the purpose of administrative installation initiated using msiexec /a?
12
DISABLEADVTSHORTCUTS=1 disables all shortcuts
14
How to make better use of MSI files
5
MSI register dll - Self-Registration considered harmful
9
Why does the MSI installer reconfigure if I delete a file?
5
why does windows installer start up everytime i start up visual basic 6
4
How do I avoid triggering MSI self-repair with my WiX / MSI package?
2
What do I do when launching an application triggers repeating, endless Windows Installer self-repair?
See more linked questions

2667
How can I install pip on Windows?
130
Create MSI or setup project with Visual Studio 2012
0
InstallShield MSI installer can not repair from Add Remove Programs, but works from installer
1203
How to install Java 8 on Mac
0
How do you disable a self repair
2
What do I do when launching an application triggers repeating, endless Windows Installer self-repair?
4
How do I avoid triggering MSI self-repair with my WiX / MSI package?
1
Windows installer popping up repair mechanism