I want to test the new Blazor server-side framework (aka Razor Components).

I installed Visual Studio 2019 RC, and then the .Net Core 3.0 preview 2, following this official tutorial.

I started to mess around, trying to install other packages from this page, uninstalled and reinstalled Visual Studio 2019, updated to the .NET Core Preview 3, installed several times the x64 and x86 packages in different orders, copy/paste the .Net Core binaries to random folders and so on. Nothing works. The ASP.NET Core 3.0 does not show up.

Here is what my VS looks like when creating a project (the yellow message appeared latter after some messing around with the packages, so it is not the real problem): 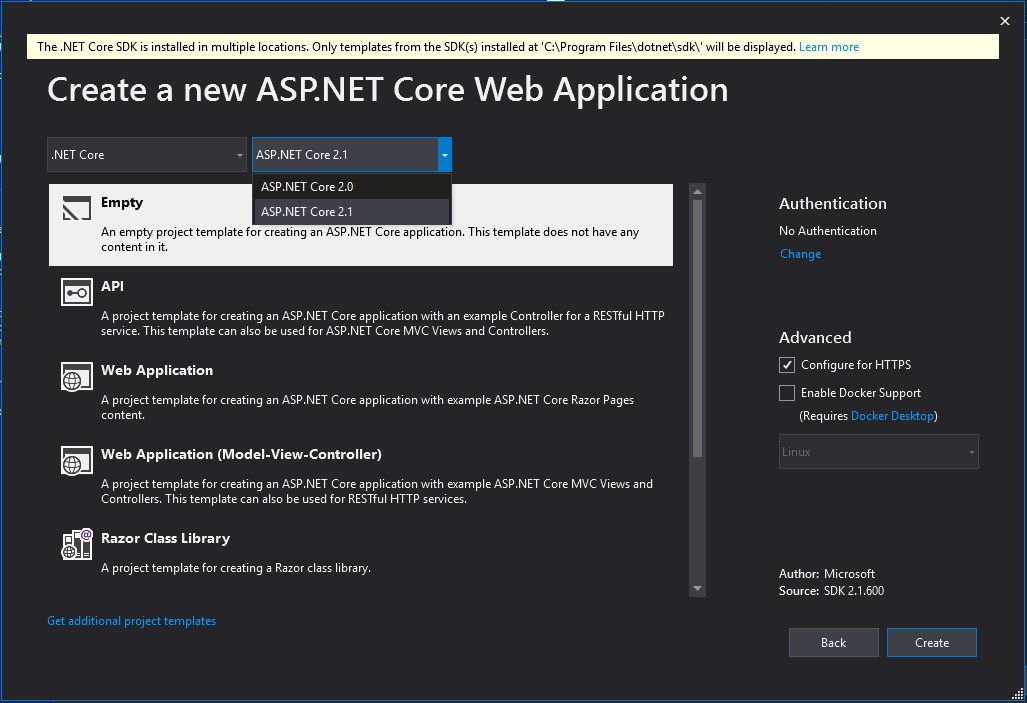 Here is the output of the dotnet --list-sdks command:

For some reason, I installed the Blazor VSIX package (the WebAssembly - not exactly what I want, but I installed it anyways) and now the ASP.NET Core 3.0 simply shows up. However, just for the blazor templates: 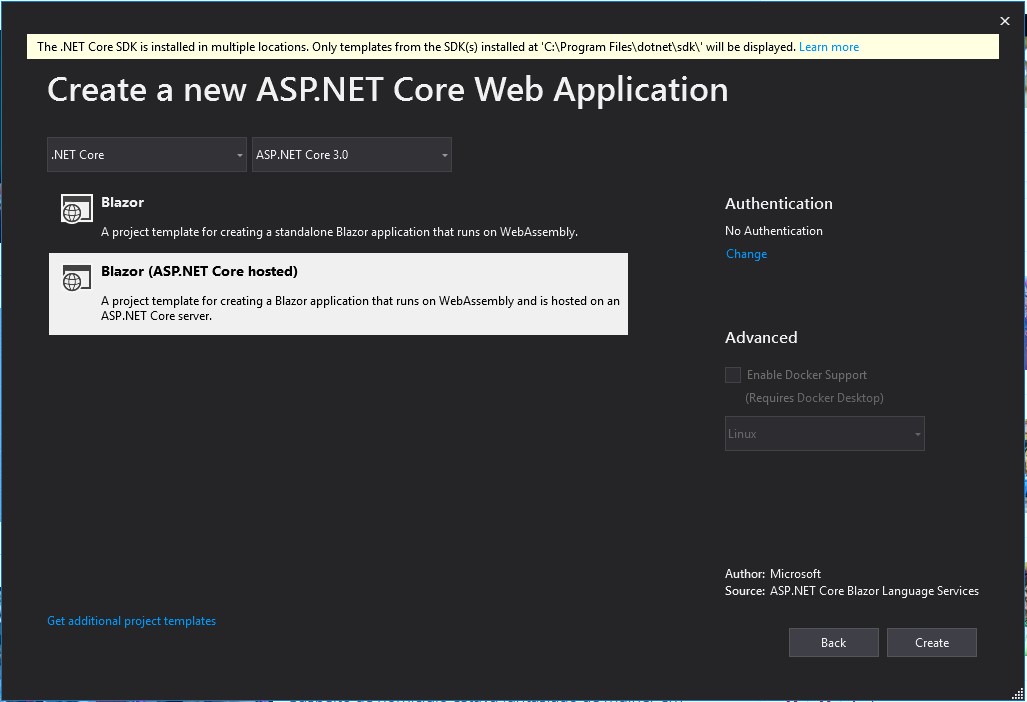 I don't understand. Is there anything obvious I'm missing?

There is an option in Tools -> Options that enables preview versions of the .NET Core SDK. In the VS Preview shipping channel, it is on (by default, and not settable). In the VS Release channel, it defaults to off and you can opt-in. 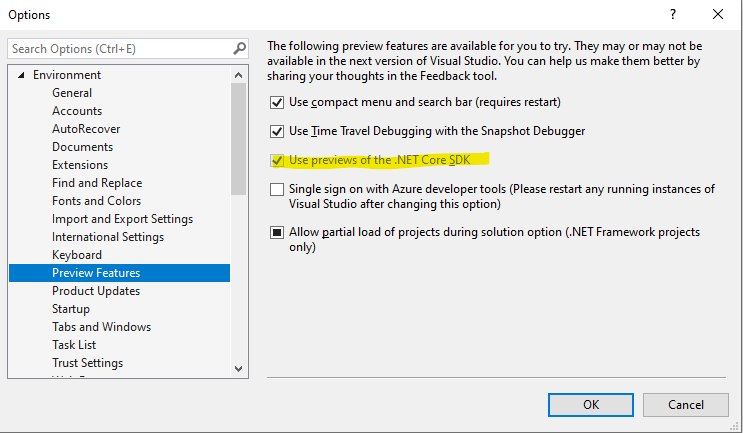 (Note: it's disabled in the screenshot because I have a Preview build installed.)

The reason for this is to allow you to customize whether a project using a released version of .NET Core (such as 2.1, the current LTS) will use tooling from the newer not-yet-release-quality SDK.

Prior to 16.1, this option was located on the Tools -> Options -> Projects and Solutions -> .NET Core page.

I had the same issue. Here is what worked for me. 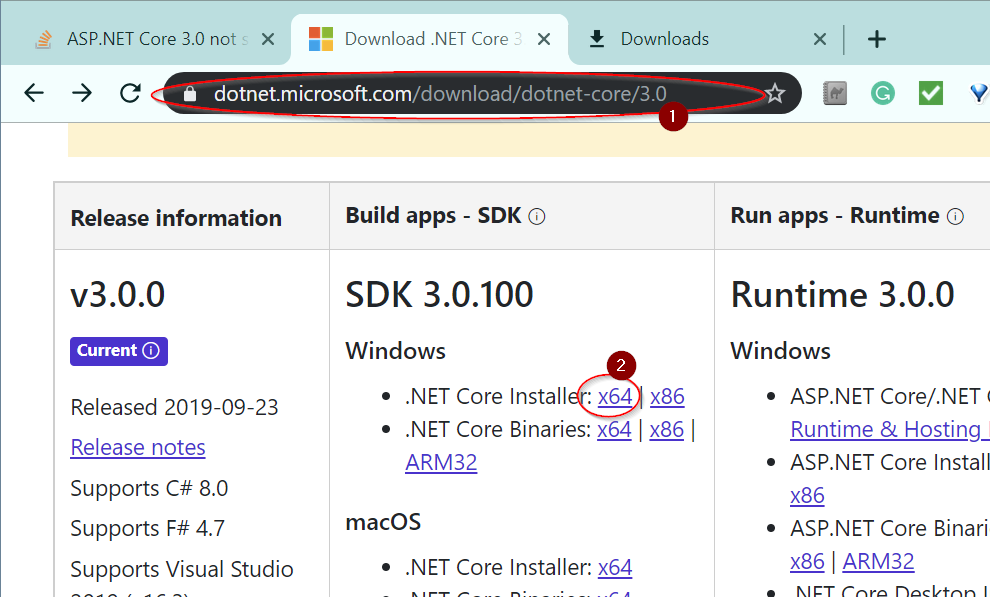 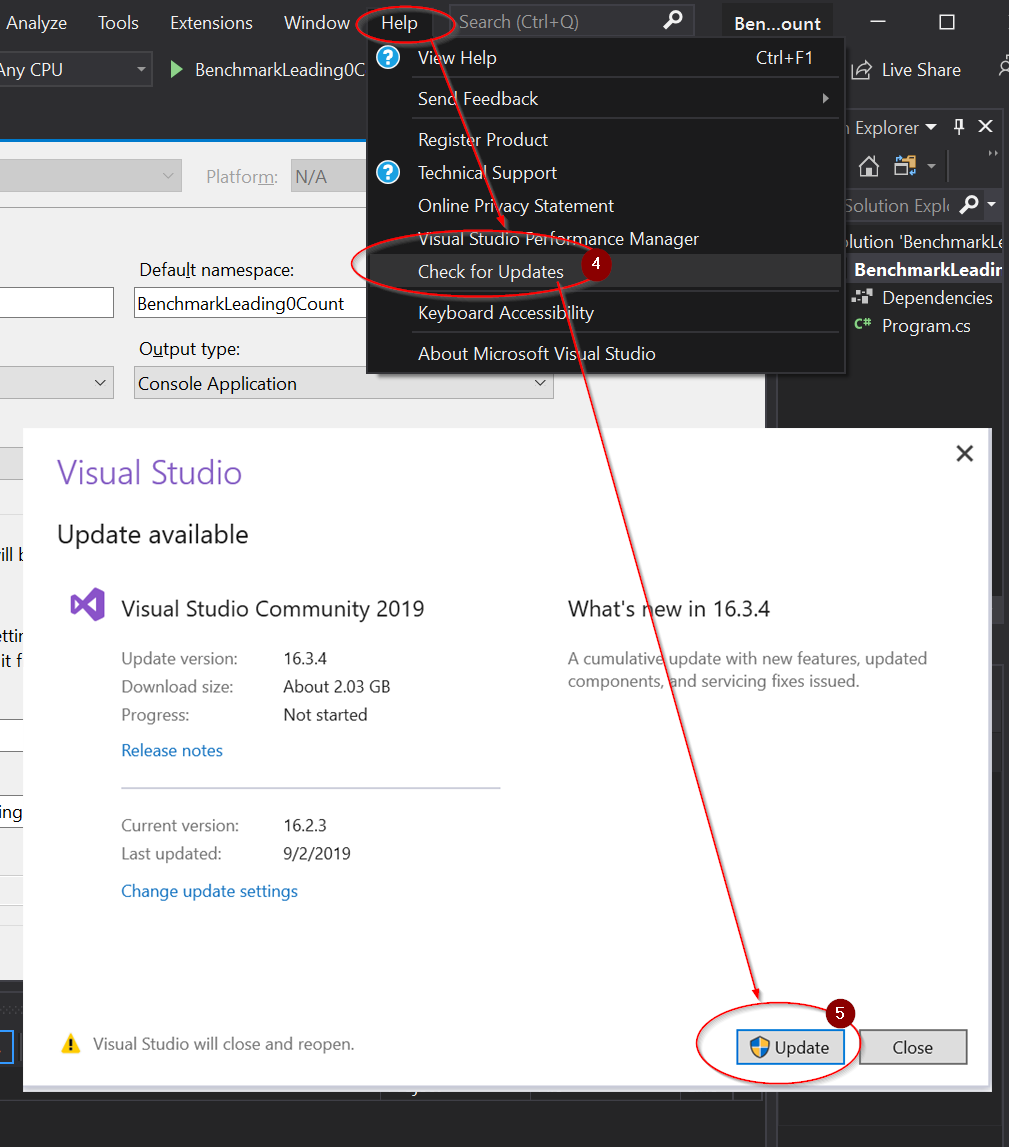 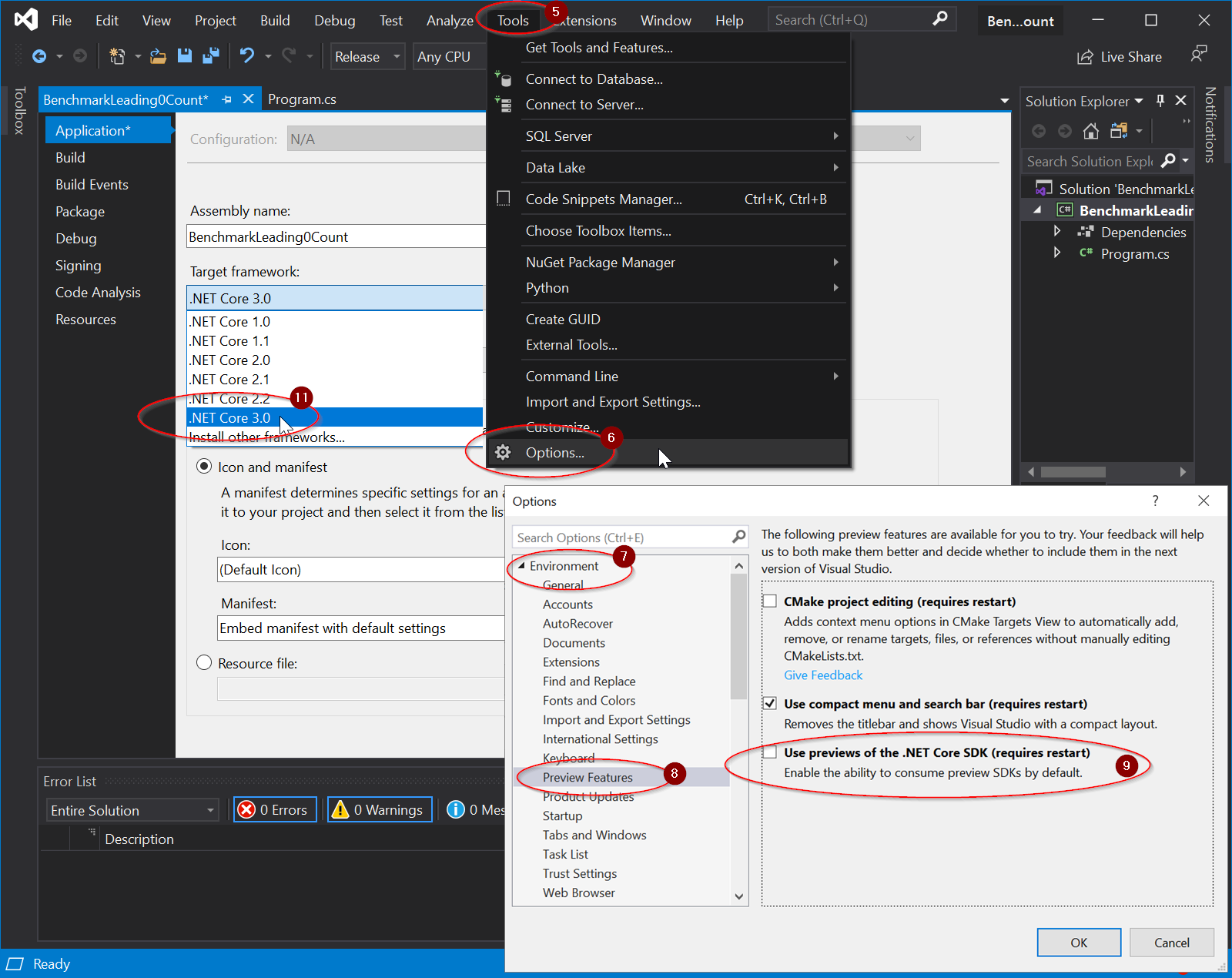 It no longer works... again!

This page seems to suggest that you need Preview to use .net Core 3.0 which is annoying.

I looked up the difference between RC and Preview, and they pull builds from different channels (stable and preview).

The next thing I’m going to try is to go back to Preview to see if .Net Core 3.0 becomes visible again.

Tried to get .NET Core 3 (preview 8 in my case) to work in the release version of Visual Studio 2019 but ASP.NET Core 3.0 refused to show up in the "Create new ASP.NET Core web application" dialog.

What eventually worked was to install the Preview version of Visual Studio 2019.

I could have saved a few hours and a lot of hair if I had taken the warning text ".NET Core 3.0 should be used with the latest previews of Visual Studio." (https://dotnet.microsoft.com/download/dotnet-core/3.0) more literally...

In my case is because I did not installed Visual Studio 2019 with that feature. So just create a new project and type .net core. Then click on Install more tools and features:

Then add the following feature: 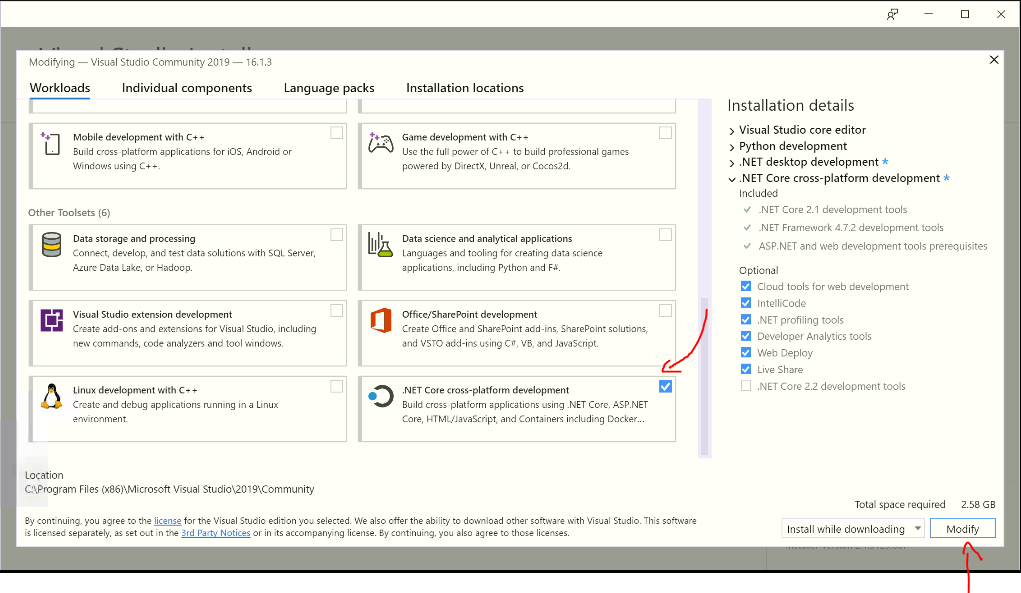 I had this problem and solved it as follows:

STEP2: Enable the ability to consume preview SDKs by default, As shown below: 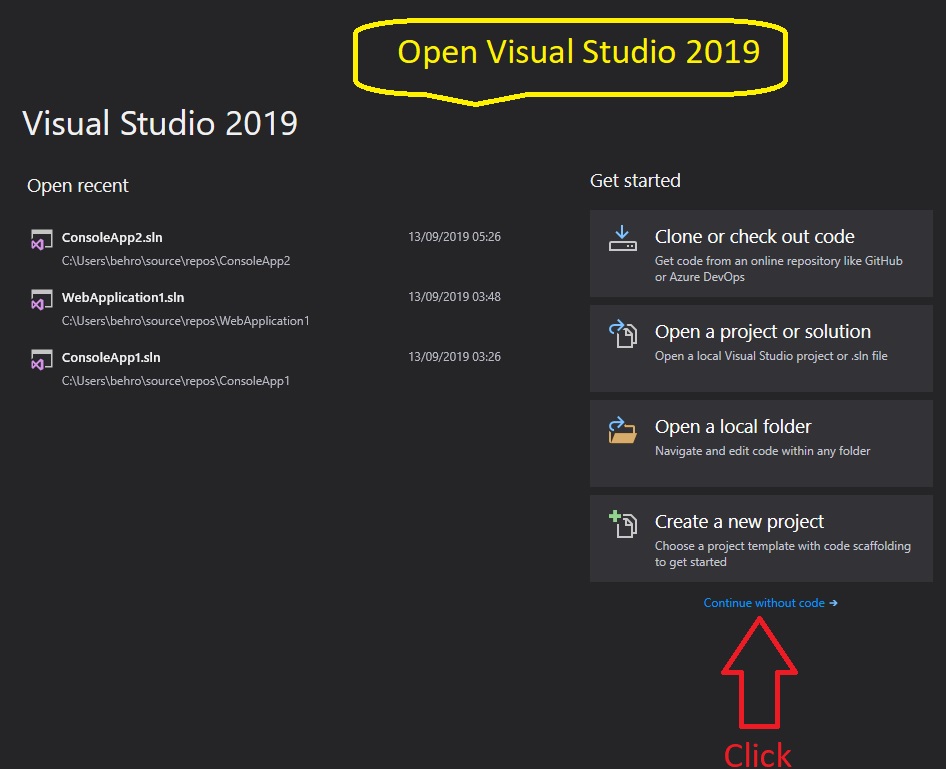 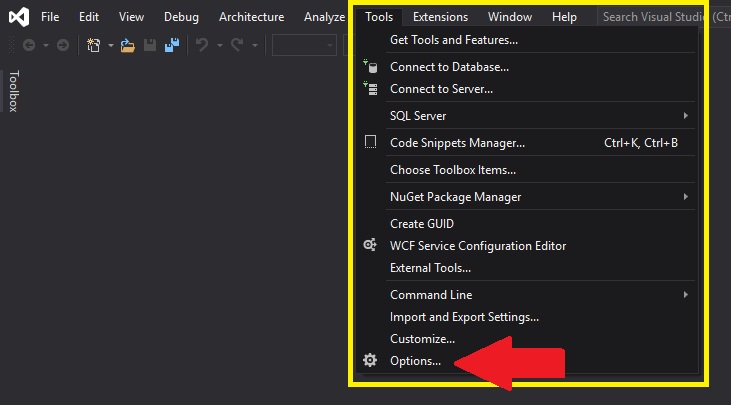 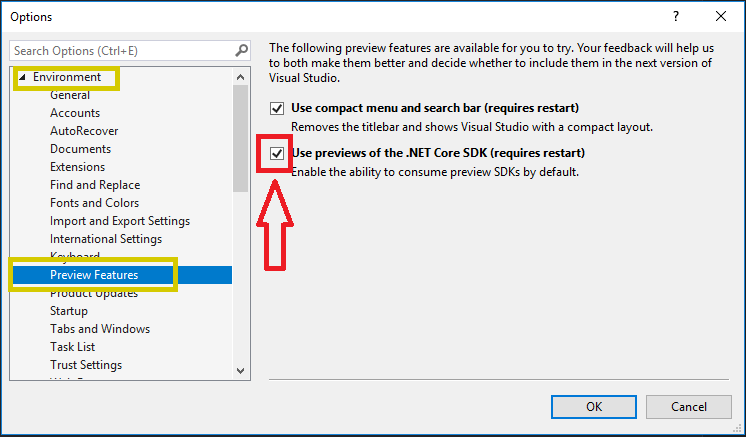 I had the very same issue. I tried everything with no success

I already had only x64 version of .NET Core SDK

In addition i had to install x86 version too. That WORKED !!!

If your solution uses global.json and sdk:version isn't compatible with the target framework, it won't let you select it or it disappears from Target framework drop-down in your project's properties. You will need to update it to something like this:

I resolved it by installing

ASP.Net Core 3.0+ just runs on vs2019 version 16.7+. You need to go to help tab on your visual studio and check for updates and update it to the latest version

Note! (don't use it on your developer machine)

2- uninstall all x86 version of .net core sdk from your machine.

3- restart visual studio and try to create a new project. 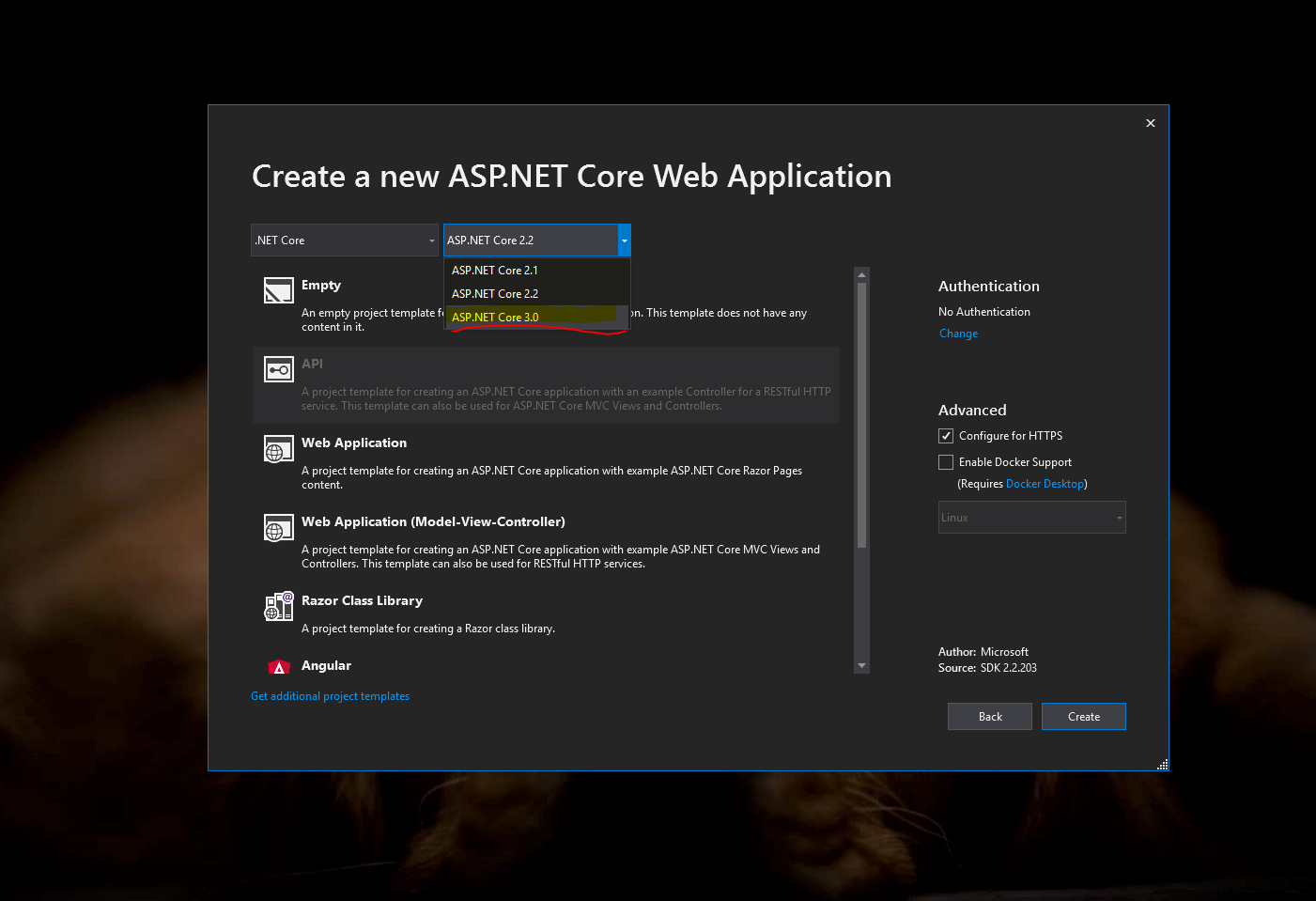 I've encountered the same problem on a Mac and found a solution to this issue. On visual studio update tab (Visual Studio -> check for updates) there is a option to change channel to "Preview". 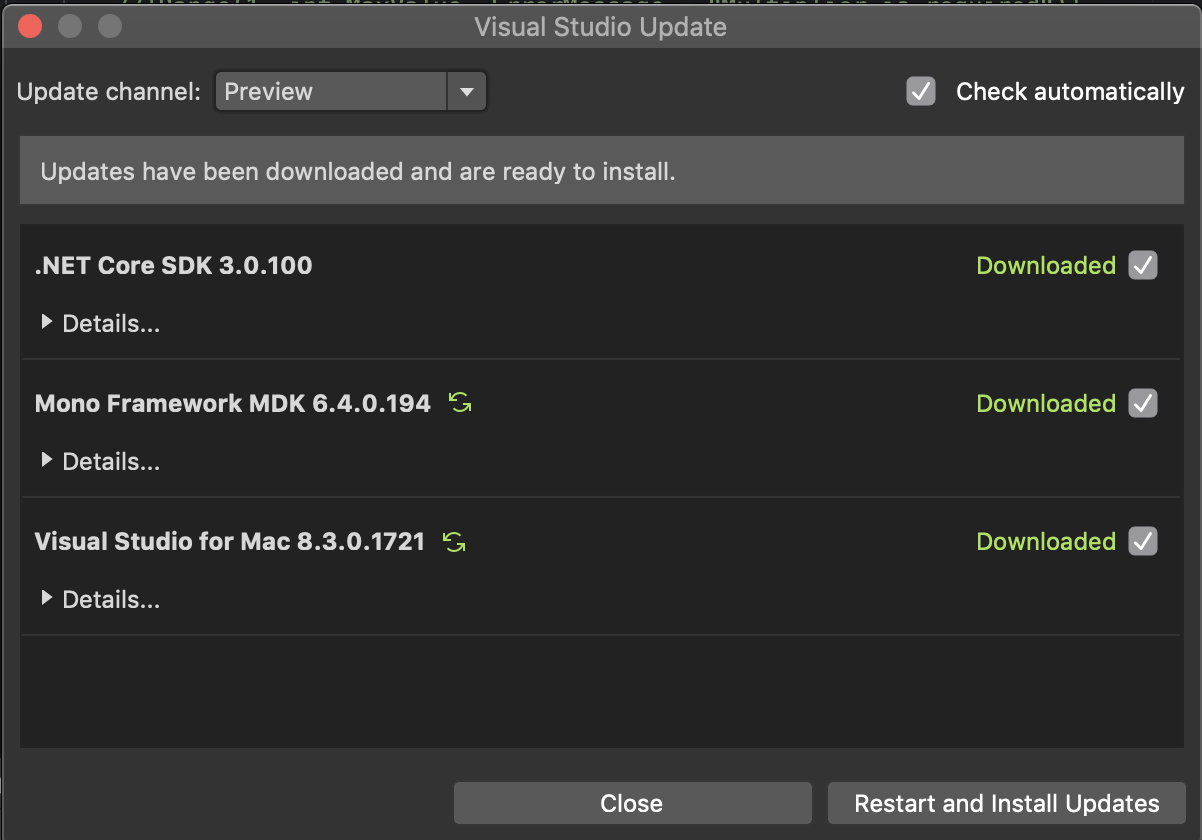 After that you can download necessary updates and go using .net core 3.0 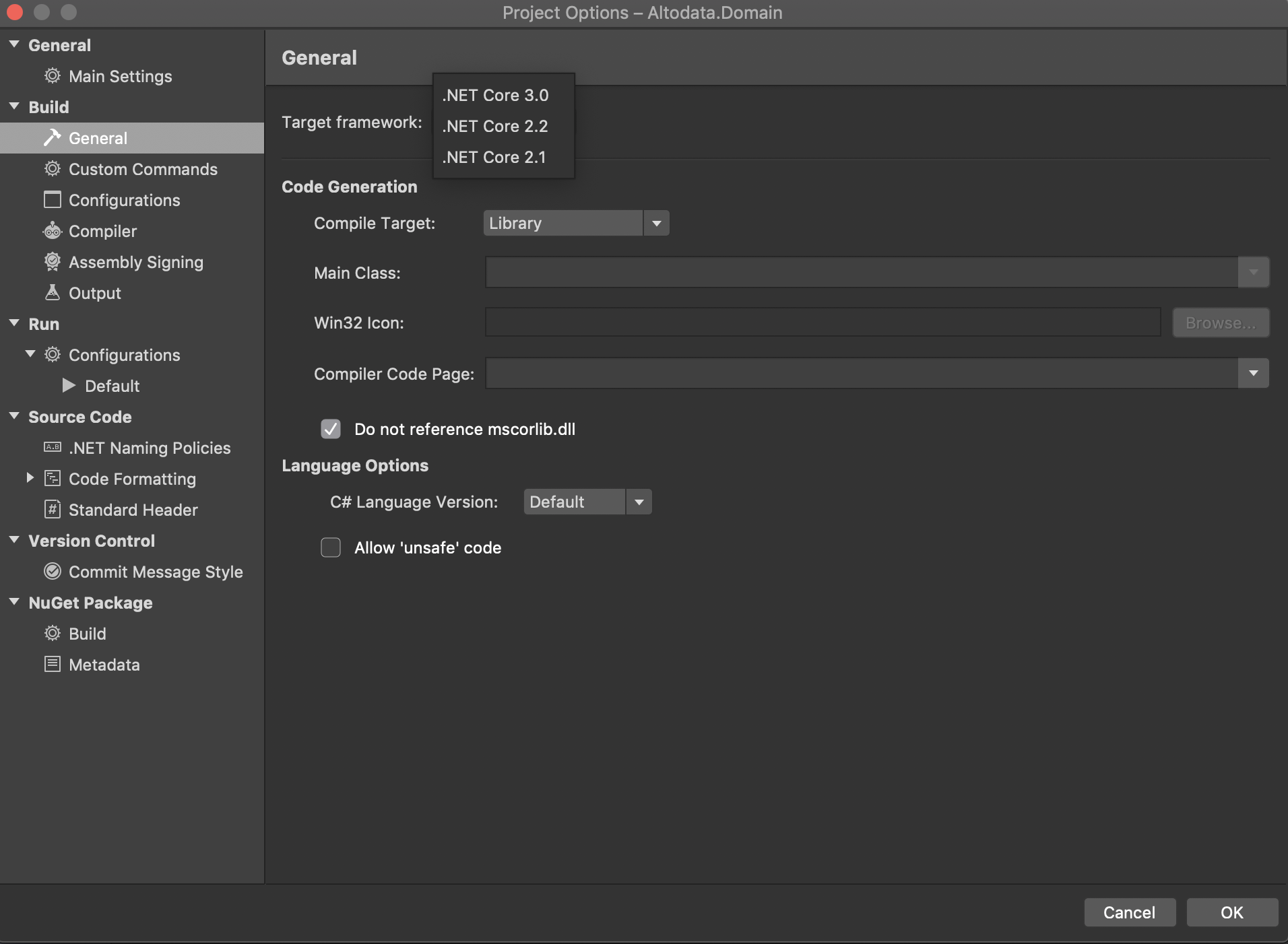 I noticed an interesting behavior. I had the latest version of VS with all the dependencies installed. But when I try to add a new project to the solution, the dialog does not show me the options beyond .Net Core 2.2 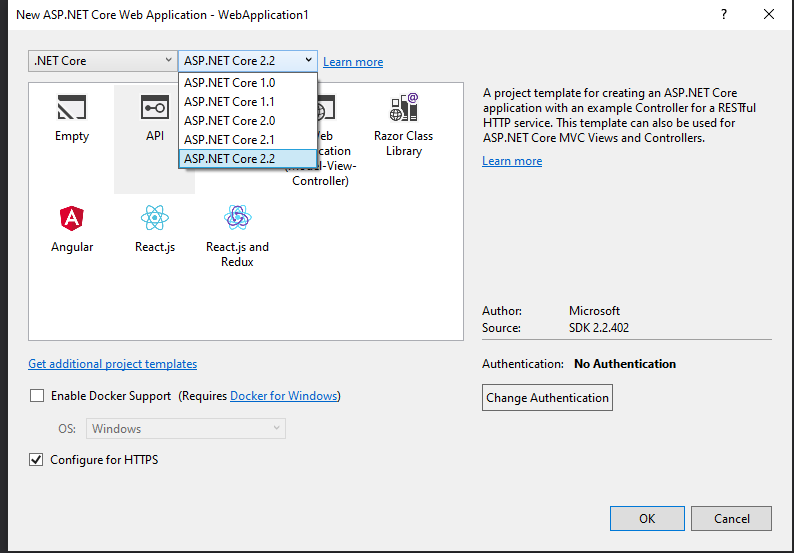 But When I create the new project from the startup page, the drop down does show the ASP.NET Core 3.1

So I was able to work around the issue by creating the new project from the startup page, then add the existing project to the solution. 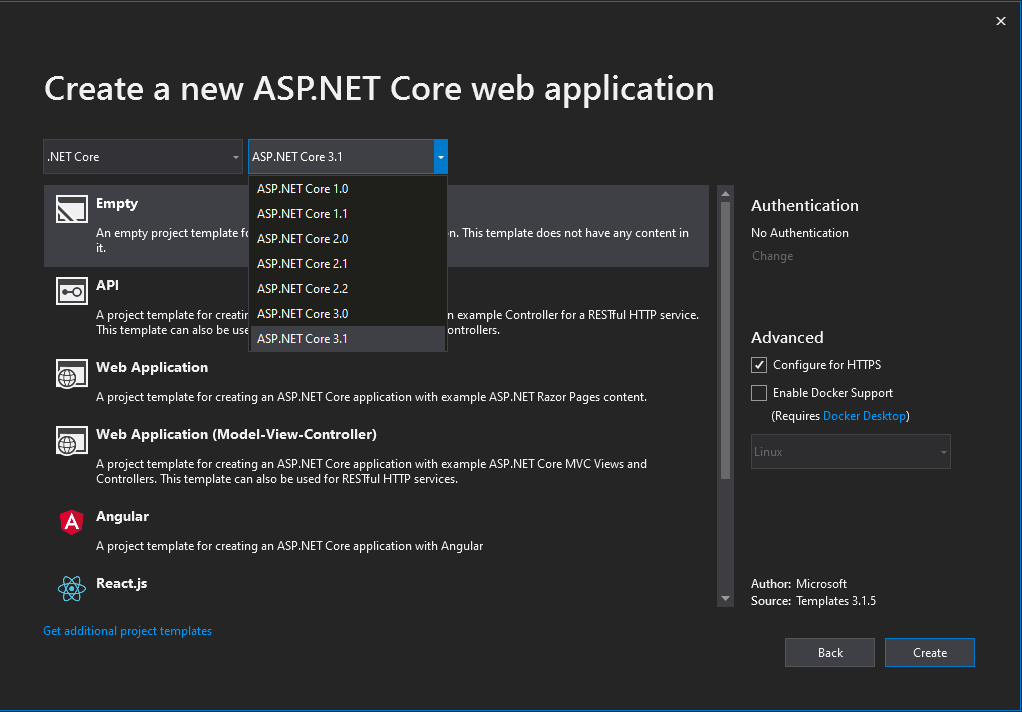 I've had the same issue after installing .net core 3.1. This is how I resolved it.

If you still have problems with Visual Studio not showing .Net Core 5.0 in Visual Studio version 16.8.0 (and assuming you downloaded the .NET Core 5.0 SDK for Visual Studio), well, apparently (and correct me if I'm wrong) it is now called just .Net 5.0, omitting the Core. 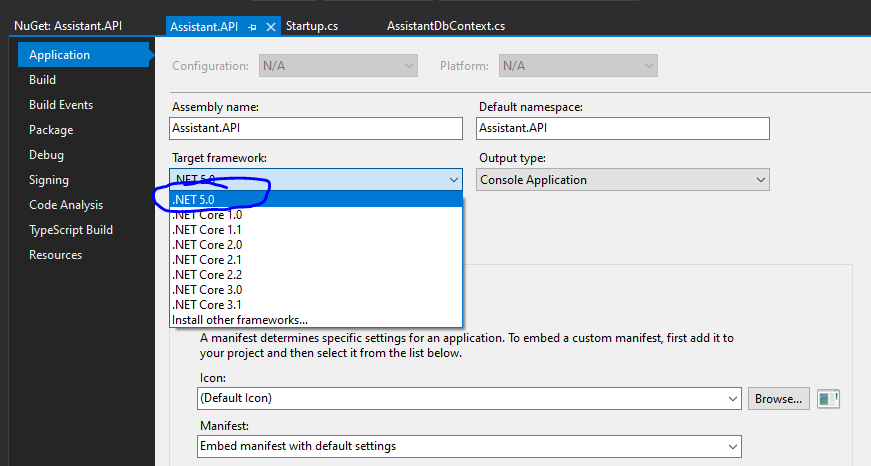 After selecting .NET 5.0, I was able to install other libraries which are currently version 5.0+ and dependent on .NET Core 5.0+

Is the new name intentional? Anyways, here some evidence of this working (I was able to install the newest version of Newtonsoft and Entity Framework for .Net Core):

Funny enough, when I try to create a new .Net Core project, the version shows up as expected: 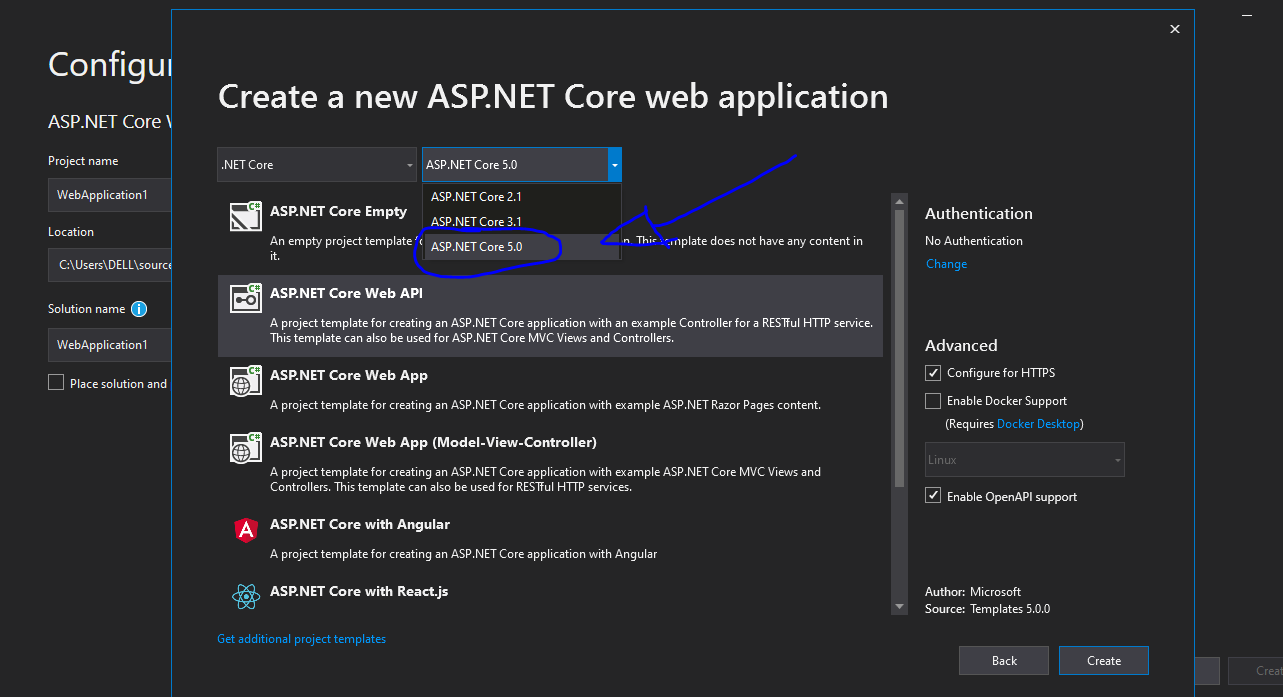 I'm very sorry for my English!

[PS: I'm literally copying&pasting this answer, which I answered somewhere else, but given that, when you Google this issue, this stackoverflow question appears first. So thats why I'm reposting]