Ask Question
Asked 13 years, 4 months ago
Modified 10 years, 4 months ago
Viewed 63k times
308
votes
Locked. This question and its answers are locked because the question is off-topic but has historical significance. It is not currently accepting new answers or interactions.

Inspired by the question series 'Hidden features of ...', I am curious to hear about your favorite Django tips or lesser known but useful features you know of.

I'm just going to start with a tip from myself :)

Don't hardcode path's in your settings.py if you want to run your project in different locations. Use the following code in settings.py if your templates and static files are located within the Django project directory:

Credits: I got this tip from the screencast 'Django From the Ground Up'.

Install Django Command Extensions and pygraphviz and then issue the following command to get a really nice looking Django model visualization:

Edited to point out that returning an HttpResponse (such as a redirect) will short circuit the decorator and work just as you expect.

There's a set of custom tags I use all over my site's templates. Looking for a way to autoload it (DRY, remember?), I found the following:

If you put this in a module that's loaded by default (your main urlconf for instance), you'll have the tags and filters from your custom tag module available in any template, without using {% load custom_tag_module %}.

The argument passed to template.add_to_builtins() can be any module path; your custom tag module doesn't have to live in a specific application. For example, it can also be a module in your project's root directory (eg. 'project.custom_tag_module').

Virtualenv + Python = life saver if you are working on multiple Django projects and there is a possibility that they all don't depend on the same version of Django/an application.

Use url names instead, and the reverse function to get the URL itself.

When you define your URL mappings, give names to your URLs.

Make sure the name is unique per URL.

I usually have a consistent format "project-appplication-view", e.g. "cbx-forum-thread" for a thread view.

This name can be used in templates with the url tag.

Use django debug toolbar. For example, it allows to view all SQL queries performed while rendering view and you can also view stacktrace for any of them.

Don't write your own login pages. If you're using django.contrib.auth.

The real, dirty secret is that if you're also using django.contrib.admin, and django.template.loaders.app_directories.load_template_source is in your template loaders, you can get your templates free too!

Say you have a different user model and you want to include that in every response. Instead of doing this:

Context processes give you the ability to pass any variable to your templates. I typically put mine in 'my_project/apps/core/context.py:

In your settings.py add the following line to your TEMPLATE_CONTEXT_PROCESSORS

Now every time a request is made it includes the my_user key automatically.

I wrote a blog post about this a few months ago so I'm just going to cut and paste:

Out of the box Django gives you several signals that are incredibly useful. You have the ability to do things pre and post save, init, delete, or even when a request is being processed. So lets get away from the concepts and demonstrate how these are used. Say we’ve got a blog

So somehow you want to notify one of the many blog-pinging services we’ve made a new post, rebuild the most recent posts cache, and tweet about it. Well with signals you have the ability to do all of this without having to add any methods to the Post class.

There we go, by defining that function and using the post_init signal to connect the function to the Post model and execute it after it has been saved.

When I was starting out, I didn't know that there was a Paginator, make sure you know of its existence!!

Use IPython to jump into your code at any level and debug using the power of IPython. Once you have installed IPython just put this code in wherever you want to debug:

Then, refresh the page, go to your runserver window and you will be in an interactive IPython window.

I have a snippet set up in TextMate so I just type ipshell and hit tab. I couldn't live without it.

Run a development SMTP server that will just output whatever is sent to it (if you don't want to actually install SMTP on your dev server.)

If you use the Bash shell, consider installing the Django bash completion script, which lives in extras/django_bash_completion in the Django distribution. It enables tab-completion of django-admin.py and manage.py commands, so you can, for instance...

The ./manage.py runserver_plus facilty which comes with django_extensions is truly awesome.

It creates an enhanced debug page that, amongst other things, uses the Werkzeug debugger to create interactive debugging consoles for each point in the stack (see screenshot). It also provides a very useful convenience debugging method dump() for displaying information about an object/frame. 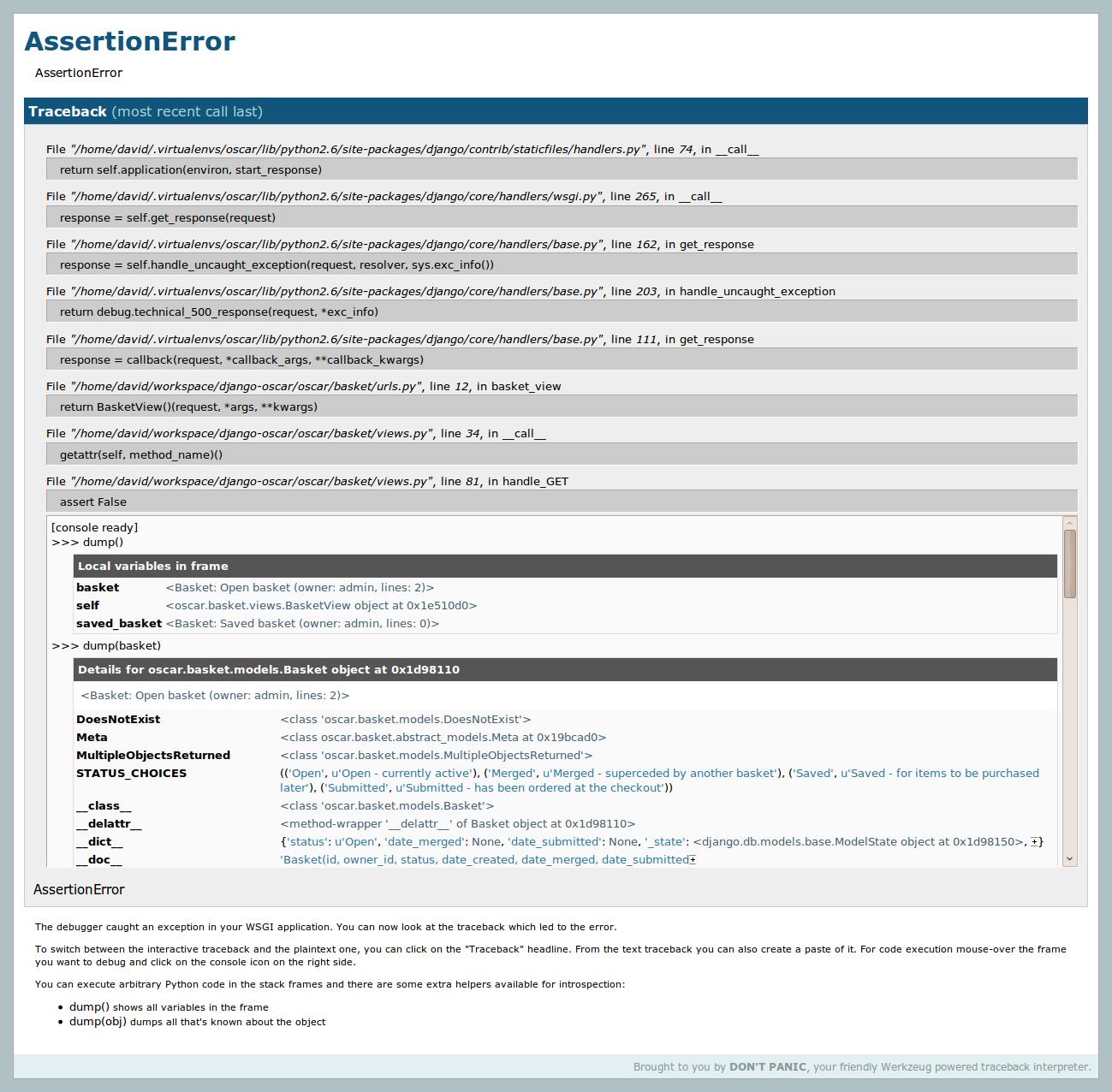 To install, you can use pip:

Then add 'django_extensions' to your INSTALLED_APPS tuple in settings.py and start the development server with the new extension:

This will change the way you debug.

I like to use the Python debugger pdb to debug Django projects.

This is a helpful link for learning how to use it: http://www.ferg.org/papers/debugging_in_python.html

When trying to exchange data between Django and another application, request.raw_post_data is a good friend. Use it to receive and custom-process, say, XML data.

Use Jinja2 alongside Django.

I use Jinja2, it's almost like a powered-up version of the django template language, it uses the same syntax, and allows you to use expressions in if statements! no more making a custom if-tags such as if_item_in_list! you can simply say %{ if item in list %}, or {% if object.field < 10 %}.

But that's not all; it has many more features to ease template creation, that I can't go though all of them in here.

This adds to the reply above about Django URL names and reverse URL dispatching.

The URL names can also be effectively used within templates. For example, for a given URL pattern:

you can have the following in templates:

Since Django "views" only need to be callables that return an HttpResponse, you can easily create class-based views like those in Ruby on Rails and other frameworks.

There are several ways to create class-based views, here's my favorite:

You can add all sorts of other stuff like conditional request handling and authorization in your base view.

Once you've got your views setup your urls.py will look something like this:

Instead of using render_to_response to bind your context to a template and render it (which is what the Django docs usually show) use the generic view direct_to_template. It does the same thing that render_to_response does but it also automatically adds RequestContext to the template context, implicitly allowing context processors to be used. You can do this manually using render_to_response, but why bother? It's just another step to remember and another LOC. Besides making use of context processors, having RequestContext in your template allows you to do things like:

which is very useful. In fact, +1 on generic views in general. The Django docs mostly show them as shortcuts for not even having a views.py file for simple apps, but you can also use them inside your own view functions:

I don't have enough reputation to reply to the comment in question, but it's important to note that if you're going to use Jinja, it does NOT support the '-' character in template block names, while Django does. This caused me a lot of problems and wasted time trying to track down the very obscure error message it generated.

The webdesign app is very useful when starting to design your website. Once imported, you can add this to generate sample text:

django.db.models.get_model does allow you to retrieve a model without importing it.

Newcomers are always puzzled because Django doesn't come with any way to serve static files. This is because the dev team think it is the job for a real life Web server.

But when developing, you may not want to set up Apache + mod_wisgi, it's heavy. Then you can just add the following to urls.py:

Your CSS / JS / IMG will be available at www.yoursite.com/site_media/.

Of course, don't use it in a production environment.

I learned this one from the documentation for the sorl-thumbnails app. You can use the "as" keyword in template tags to use the results of the call elsewhere in your template.

This is mentioned in passing in the Django templatetag documentation, but in reference to loops only. They don't call out that you can use this elsewhere (anywhere?) as well.

django.views.generic.list_detail.object_list -- It provides all the logic & template variables for pagination (one of those I've-written-that-a-thousand-times-now drudgeries). Wrapping it allows for any logic you need. This gem has saved me many hours of debugging off-by-one errors in my "Search Results" pages and makes the view code cleaner in the process.

PyCharm IDE is a nice environment to code and especially debug, with built-in support for Django.

Use xml_models to create Django models that use an XML REST API backend (instead of a SQL one). This is very useful especially when modelling third party APIs - you get all the same QuerySet syntax that you're used to. You can install it from PyPI.

XML from an API:

And now in python:

It can also handle relationships and collections. We use it every day in heavily used production code, so even though it's beta it's very usable. It also has a good set of stubs that you can use in your tests.

(Disclaimer: while I'm not the author of this library, I am now a committer, having made a few minor commits)

Use database migrations. Use South.

Not the answer you're looking for? Browse other questions tagged python django hidden-features or ask your own question.

264
WiX tricks and tips
57
Hidden Features of Ruby on Rails
10
Is INTERPRETER an anti-pattern?
26
Open file in Django app
17
Django testing tips
4
What is the most common way to configure static files in debug and production for Django
5
IOS SDK: first advice for beginners
8
Is there a tool for Django project structure/information flow visualization?
3
Inheriting specific parent model attributes in foreignkey->'self' relationship in Django
2
Crossplatform deployment
See more linked questions