Is there a standard function to check for null, undefined, or blank variables in JavaScript?

Is there a universal JavaScript function that checks that a variable has a value and ensures that it's not undefined or null? I've got this code, but I'm not sure if it covers all cases:

You can just check if the variable has a truthy value or not. That means

will evaluate to true if value is not:

The above list represents all possible falsy values in ECMA-/Javascript. Find it in the specification at the ToBoolean section.

Furthermore, if you do not know whether a variable exists (that means, if it was declared) you should check with the typeof operator. For instance

If you can be sure that a variable is declared at least, you should directly check if it has a truthy value like shown above.

The verbose method to check if value is undefined or null is:

You can also use the == operator but this expects one to know all the rules:

This will return true for

and zero argument functions since a function's length is the number of declared parameters it takes.

To disallow the latter category, you might want to just check for blank strings

This is the safest check and I haven't seen it posted here exactly like that:

It will cover cases where value was never defined, and also any of these:

Edited: Changed to strict equality (!==) because it's the norm by now ;)

You may find the following function useful:

"Note that the bind operator (::) is not part of ES2016 (ES7) nor any later edition of the ECMAScript standard at all. It's currently a stage 0 (strawman) proposal for being introduced to the language." – Simon Kjellberg. the author wishes to add his support for this beautiful proposal to receive royal ascension.

Let's define that a blank variable is null, or undefined, or if it has length, it is zero, or if it is an object, it has no keys:

is all you need.

Take a look at the new ECMAScript Nullish coalescing operator

You can think of this feature - the ?? operator - as a way to “fall back” to a default value when dealing with null or undefined.

Again, the above code is equivalent to the following.

The first answer with best rating is wrong. If value is undefined it will throw an exception in modern browsers. You have to use:

! check for empty strings (""), null, undefined, false and the number 0 and NaN. Say, if a string is empty var name = "" then console.log(!name) returns true.

this function will return true if val is empty, null, undefined, false, the number 0 or NaN.

According to your problem domain you can just use like !val or !!val.

You are a bit overdoing it. To check if a variable is not given a value, you would only need to check against undefined and null.

This is assuming 0, "", and objects(even empty object and array) are valid "values".

I don't recommend trying to define or use a function which computes whether any value in the whole world is empty. What does it really mean to be "empty"? If I have let human = { name: 'bob', stomach: 'empty' }, should isEmpty(human) return true? If I have let reg = new RegExp('');, should isEmpty(reg) return true? What about isEmpty([ null, null, null, null ]) - this list only contains emptiness, so is the list itself empty? I want to put forward here some notes on "vacuousness" (an intentionally obscure word, to avoid pre-existing associations) in javascript - and I want to argue that "vacuousness" in javascript values should never be dealt with generically.

For deciding how to determine the "vacuousness" of values, we need to accomodate javascript's inbuilt, inherent sense of whether values are "truthy" or "falsy". Naturally, null and undefined are both "falsy". Less naturally, the number 0 (and no other number except NaN) is also "falsy". Least naturally: '' is falsy, but [] and {} (and new Set(), and new Map()) are truthy - although they all seem equally vacuous!

There is also some discussion concerning null vs undefined - do we really need both in order to express vacuousness in our programs? I personally avoid ever having undefined appear in my code. I always use null to signify "vacuousness". Again, though, we need to accomodate javascript's inherent sense of how null and undefined differ:

To me, null is an explicit signifier of vacuousness; "something that could have been filled in was intentionally left blank".

This is a bad implementation of default arguments as it interacts directly with undefined:

This is a good implementation:

This is a bad way to accept the default argument:

Simply do this instead:

By the way: do you have a function with multiple arguments, and you want to provide some arguments while accepting defaults for others?

If you want to provide values for a and d and accepts defaults for the others what to do? This seems wrong:

The answer is: refactor fnWithDefaults to accept a single object:

I believe that vacuousness should never be dealt with in a generic fashion. We should instead always have the rigour to get more information about our data before determining if it is vacuous - I mainly do this by checking what type of data I'm dealing with:

Note that this function ignores inheritance - it expects value to be a direct instance of Cls, and not an instance of a subclass of Cls. I avoid instanceof for two main reasons:

Note that Object.getPrototypeOf is used to avoid an (obscure) edge-case such as let v = { constructor: String }; The isType function still returns correctly for isType(v, String) (false), and isType(v, Object) (true).

Overall, I recommend using this isType function along with these tips:

The probably shortest answer is

if you change rigth side to val==='' then empty array will give false. Proof 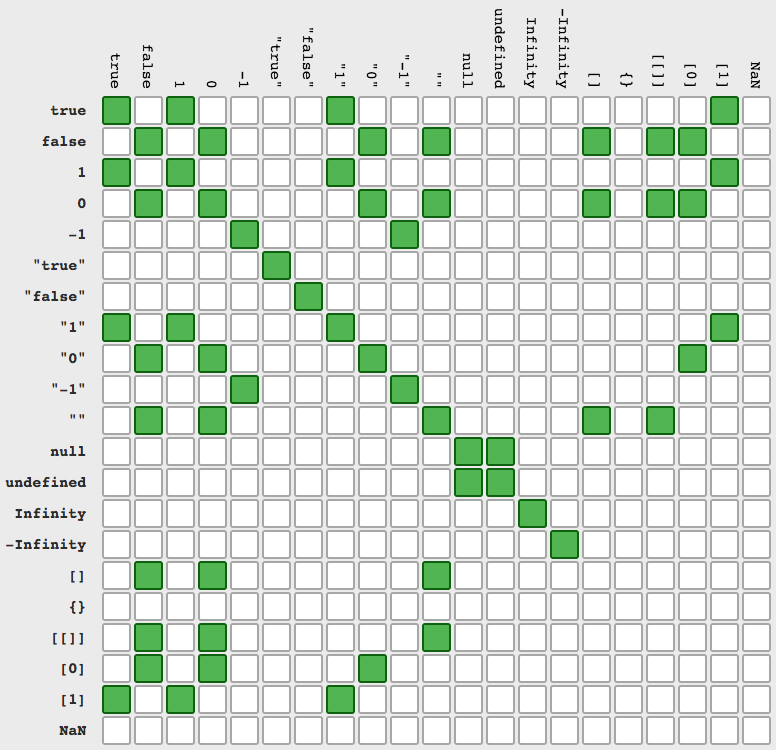 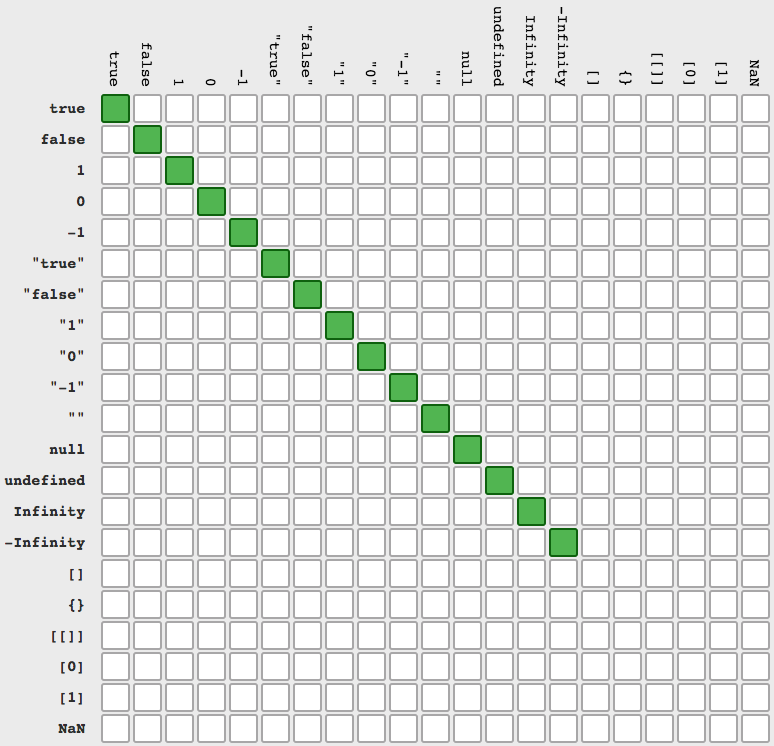 To write clear and easy understandable code, use explicite list of accepted values

If you prefer plain javascript try this:

Otherwise, if you are already using underscore or lodash, try:

is a really nice and clean way to handle it in a lot of places, can also be used to assign variables

If the variable hasn't been declared, you wont be able to test for undefined using a function because you will get an error.

Both will generate an error if foo has not been declared.

You could use the nullish coalescing operator ?? to check for null and undefined values. See the MDN Docs

I used @Vix function() to check the object of which type.

In ES6 with trim to handle whitespace strings:

It may be usefull.

If you are using TypeScript and don't want to account for "values those are false" then this is the solution for you:

Please Note: As mentioned below this is now deprecated, use value === undefined || value === null instead. ref.

The optional chaining operator provides a way to simplify accessing values through connected objects when it's possible that a reference or function may be undefined or null.

The nullish coalescing operator may be used after optional chaining in order to build a default value when none was found:

but this solution is over-engineered, if you dont'want to modify the function later for busines-model needings, then is cleaner to use it directly in code:

This will never throw an error. If myObject, child, or myValue is null then myNewValue will be null. No errors will be thrown

For everyone coming here for having similar question, the following works great and I have it in my library the last years:

If you want to avoid getting true if the value is any of the following, according to jAndy's answer:

One possible solution that might avoid getting truthy values is the following:

It would be used as follows:

In addition to those scenarios, you may want to return false if the object or array is empty:

You would go about it this way:

If you wish to check for all whitespace strings (" "), you may do the following:

Note: hasOwnProperty returns true for empty strings, 0, false, NaN, null, and undefined, if the variable was declared as any of them, so it might not be the best to use. The function may be modified to use it to show that it was declared, but is not usable.

it will also check white spaces (' ') along with following:

6
How do I check for undefined types in JavaScript?
1
javascript check null or empty string
5
Checking if Null
5
How can i check if an object is undefined (javascript)?
-1
How the statement if is evaluated in javascript
0
How to Check for a missing variable In JS?
0
Testing for variables existence not working as expected in JavaScript
0
JavaScript: checking for null and undefined
0
A way to check for undefined null and 0
0
Set a variable inside a object only if its null
See more linked questions