I have a very simple Azure function in C# for which I've setup Azure AD Auth. I've just used the Express settings to create an App registration in the Function configuration.

When I access the function in my browser everything works as expected (if not logged in I have to login and get redirected to my API). But if I try to access my function anywhere a Bearer token is needed I get an 401 Unauthorized error. Even weirder I also can't execute the function in the Azure Portal. 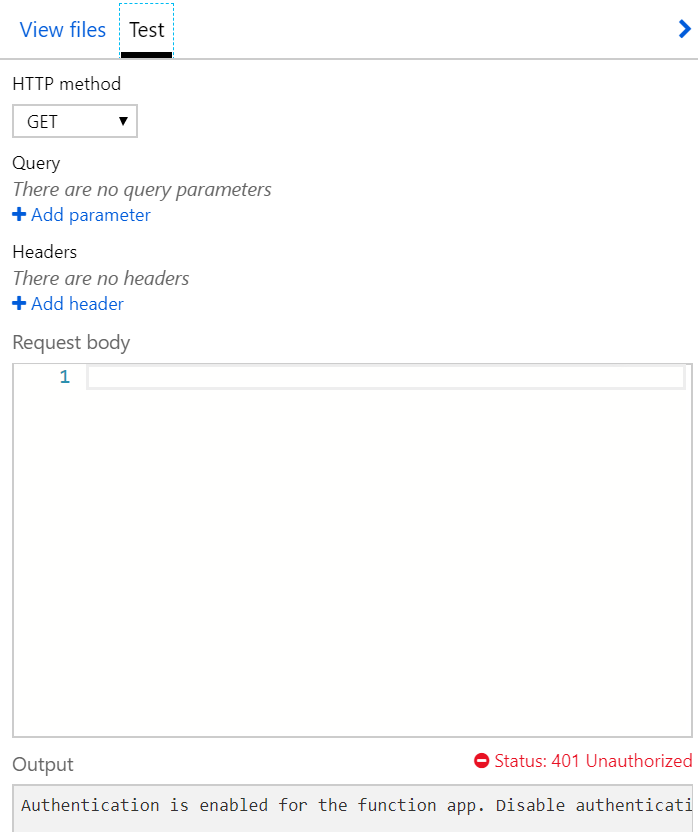 But the token was aquired without a problem and added to the request: 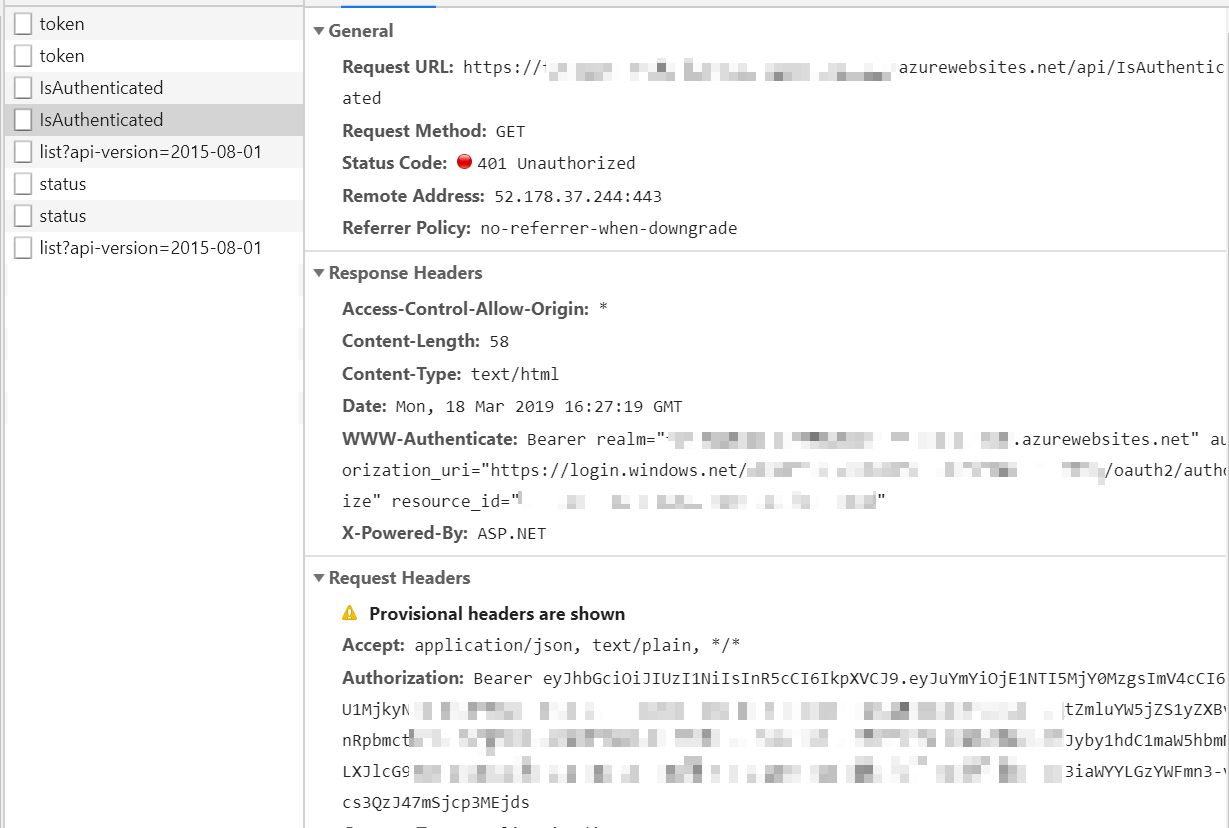 I've tried a few different things to solve this problem. First I thought maybe it's a CORS problem (since I've also had a few of those) and just set CORS to accept *, but nothing changed.

Then I've added my API login endpoints to the redirect and tried setting the implicit grant to also accept Access tokens, it's still not working.

Is there anything I've overlooked? Shouldn't the App registration express config just work with azure functions?

Putting the URL to my function app in the redirects as suggested by @thomas-schreiter didn't change anything (I've tried the config in the screenshot and also just putting each of those values on it's own).

I've now also tried to aquire an Bearer token the manual way with Postman, but I still run into a 401 when calling my API.

This took forever to figure out, and there is very little information about this in the offical documentations.

But it turns out the problem was/is that Azure Functions don't support Bearer tokens generated by the oauth2/v2.0/ Azure API. Since the portal uses those (if your AD supports them) you are out of luck to be able to run the function in there.

This also explains why my postman requests didn't work, because I was also using the v2 api. After switching to v1 I could access my API (Postman doesn't allow you to add a resource_id when you use the integrated auth feature, so I had to switch to handling everything manually).

After that came the realisation that you can't use MSAL either if you are writing a JS client (Angular in my case). So one alternative is ADAL, where the Angular implementation looks kind of awkward. So I decided to use angular-oauth2-oidc which took another hour of tinkering to get it to play nicely with Azure AD.

But after all that I can finally access my API.

I really don't understand why you wouldn't allow users to access Azure Function Apps with Azure AD v2 tokens, but at least this should be so much better documented. But whatever, I can finally go to sleep.

EDIT: After I opend an issue for this, they added a note that v2 isn't supported by Azure Functions, hopefully making life easier for other people.

I managed to get it working through postman using following configuration. Important lesson was setting in "Allowed token audiences" and "resource" name used in postman to acquire token should be same in this case. I used the same code provided here in question. in this case app registered in Azure AD is a client and resource as well. configuration and testing through postman as follows 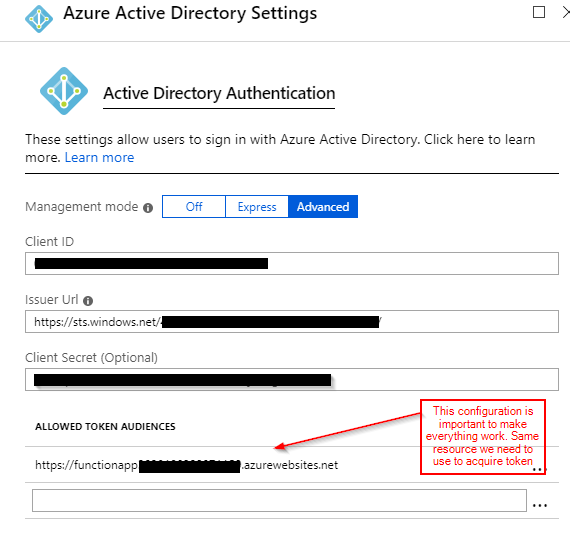 In the AAD app itself, go to Settings -> Reply URLs and verify that the url of the Function App is in the list, which has the following format: https://mycoolapp.azurewebsites.net. If it isn't, then add it.

If you use slots, you have to add it for both slots.

The only thing i can think of right now is Allowed Audience.

Go to Your Active directory settings and click Advance. Under Allowed Token Audience Add your exact function url. It might already be there with call back url but Simply replace it with only function base url without any call back as mentioned in the picture.

Make sure when you press ok , you also save your Authentication / Authorization setting to take effect and try again after 1min or so. I tested using PostMan and passing bearer token and it works ! 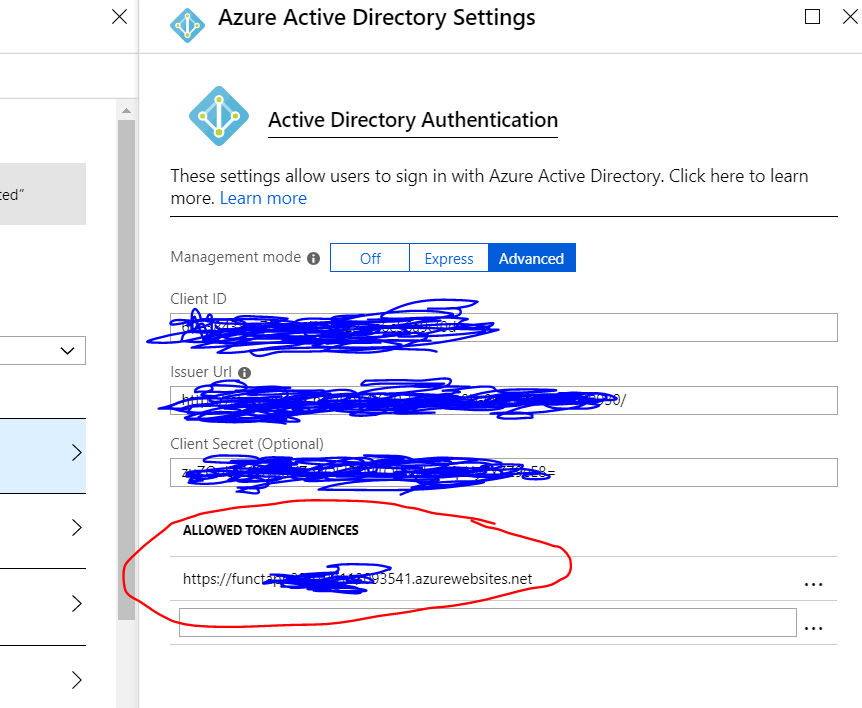 I'm facing the exact same issue today. The issue turned out to be the resource id that I was passing when requesting the access token.

For example, initially I was requesting a token like this, using the function URL as the resource id:

While this returned an access token, I was receiving a 401 unauthorized when using the access token to call my function api.

I changed my code to pass my function apps App Id as the resource:

Not the answer you're looking for? Browse other questions tagged c# azure azure-active-directory azure-functions or ask your own question.