I am using scikit-learn to cluster some data, and I want to compare the results of different clustering techniques. I am immediately faced with the issue that the labels for the clusters are different for different runs, so even if they are clustered exactly the same the similarity of the lists is still very low.

I would (ideally) like a function that returns the best mapping in the form of a translation dictionary like this:

So the best mapping is the one that minimizes the number of differences between the two lists. I think's a good criterion, but there may be a better one.

I could write a trial-and-error optimization algorithm to do this, but I'm hardly the first person to want to compare the results of clustering algorithms. I expect something like this already exists and I just don't know what it's called. But I searched around and didn't find any answers.

Based on Pallie's answer I was able to create the findMapping function, and then I took it one step further to create a translation function that returns the second list converted to the labels of the first list.

Even with this conversion (which I needed for consistent plotting of cluster colors), using the Rand index and/or normalized mutual information does seem like a good way to compare the differences that don't require a shared labeling.

I also like the idea of first sorting both lists according the values in the data, but that may not work when comparing clusters from very different data.

You could try calculating the adjusted Rand index between two results. This gives a score between -1 and 1, where 1 is a perfect match.

Or by taking argmax of confusion matrix: 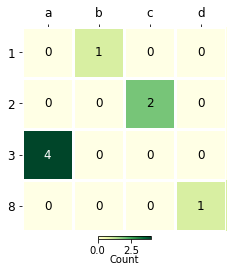 For the Hungarian method:

Not the answer you're looking for? Browse other questions tagged python python-3.x scikit-learn cluster-analysis array-difference or ask your own question.

17
How to set k-Means clustering labels from highest to lowest with Python?
4
reordering cluster numbers for correct correspondence

1161
How do I find the location of my Python site-packages directory?
1194
How can I reverse a list in Python?
1041
Find all files in a directory with extension .txt in Python
1328
How to find if directory exists in Python
753
Python: Find in list
1049
How to return dictionary keys as a list in Python?
0
How to modify the elements of one list based on another
0
how to convert two-dimensional list to another list with dict as elements
3
How to join two lists based on the list element occurrence of one of the two using Python
1
How to add edges with a list as label in Networkx Python