What does Visual Studio mean by normalize inconsistent line endings?

It then gives me a drop down with different standards or something, such as Windows, Mac, Unix, and a couple of Unicode ones.

What does this mean and what is going to happen if I click Yes?

What that usually means is that you have lines ending with something other than a carriage return/line feed pair. It often happens when you copy and paste from a web page into the code editor.

Normalizing the line endings is just making sure that all of the line ending characters are consistent. It prevents one line from ending in \r\n and another ending with \r or \n; the first is the Windows line end pair, while the others are typically used for Mac or Linux files.

Since you're developing in Visual Studio, you'll obviously want to choose "Windows" from the drop down. :-)

Some lines end with \n.

Some other lines end with \r\n.

Visual Studio suggests you to make all lines end the same.

To turn the option ON/OFF, follow the steps below from menu bar:

The file you are editing has been edited with some other editor that does not use the same line endings, resulting in a file with mixed line endings.

The ASCII characters in use for line endings are:

The Wikipedia newline article might help you out. Here is an excerpt:

The different newline conventions often cause text files that have been transferred between systems of different types to be displayed incorrectly. For example, files originating on Unix or Apple Macintosh systems may appear as a single long line on some programs running on Microsoft Windows. Conversely, when viewing a file originating from a Windows computer on a Unix system, the extra CR may be displayed as ^M or at the end of each line or as a second line break.

It means that, for example, some of your lines of text with a <Carriage Return><Linefeed> (the Windows standard), and some end with just a <Linefeed> (the Unix standard).

If you click 'yes' these the end-of-lines in your source file will be converted to have all the same format.

This won't make any difference to the compiler (because end-of-lines count as mere whitespace), but it might make some difference to other tools (e.g. the 'diff' on your version control system).

When you copy paste something from web, you might get the inconsistent line endings.
In order to fix this, you can use Visual studio extension "Line Endings Unifier" which can make line ending consistent automatically while saving file. 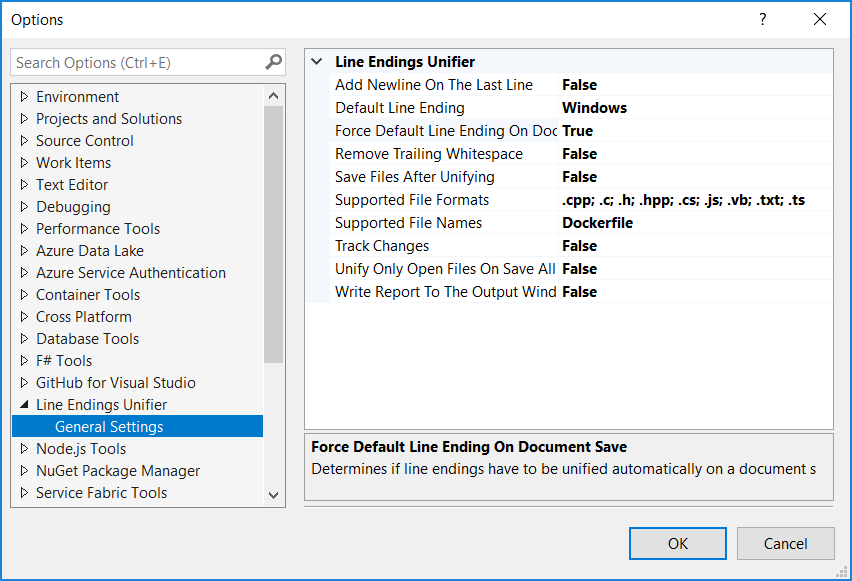 It's not just Visual Studio... It'd be any tools that read the files, compilers, linkers, etc. that would have to be able to handle it.

In general (for software development) we accept the multiplatform line ending issue, but let the version control software deal with it.

Line endings also called newline, end of line (EOL) or line break is a control character or sequence of control characters in a character encoding specification (e.g. ASCII or EBCDIC) that is used to signify the end of a line of text and the start of a new one. Some text editors set/implement this special character when you press the Enter key.

The Carriage Return, Line Feed characters are ASCII representations for the end of a line (EOL). They will end the current line of a string, and start a new one.

However, at the operating system level, they are treated differently:

Normalizing inconsistent line endings in Visual Studio means selecting one character type to be used for all your files. It could be:

However, you can set this in a better way using .gitattributes file in your root directory to avoid conflicts when you move your files from one Operating system to the other.

Simply create a new file called .gitattributes in the root directory of your application:

And add the following in it:

Note: If this is an already existing project, simply run this command to update the files for the application using the newly defined line ending as specified in the .gitattributes.

There'a an add-in for Visual Studio 2008 that converts the end of line format when a file is saved. You can download it here: http://grebulon.com/software/stripem.php

I had this problem in VS 2019 and solved it by setting the LineBreak configuration for Windows, before it was set for Unix.

Not the answer you're looking for? Browse other questions tagged visual-studio line-endings or ask your own question.