I have no idea how to solve following problem efficiently without using _siftup or _siftdown:

How to restore the heap invariant, when one element is out-of-order?

Here is my real scenario, read it if you are interested in.

So how to update the heap, when one particular word count increase?

it costs O(n) to index and O(logn) to update. heapify is another solution, but less efficient than _siftup or _siftdown.

But _siftup and _siftdown are protected member in heapq, so they are not recommended to access from outside.

So is there a better and more efficient way to solve this problem? Best practice for this situation?

Thanks for reading, I really appreciate it to help me out. : )

already refer to heapq python - how to modify values for which heap is sorted, but no answer to my problem

One important thing that you have to keep in mind is that theoretical complexity and performances are two different things (even though they are related). In other words, implementation does matter too. Asymptotic complexities give you some lower bounds that you can see as guarantees, for example an algorithm in O(n) ensure that in the worst case scenario, you will execute a number of instructions that is linear in the input size. There are two important things here:

Depending on the topic/problem you consider, the first point can be very important. In some domains, constants hidden in asymptotic complexities are so big that you can't even build inputs that are bigger than the constants (or that input wouldn't be realistic to consider). That's not the case here, but that's something you always have to keep in mind.

Giving these two observations, you can't really say: implementation B is faster than A because A is derived from a O(n) algorithm and B is derived from a O(log n) algorithm. Even if that's a good argument to start with in general, it's not always sufficient. Theoretical complexities are especially good for comparing algorithms when all inputs are equally likely to happen. In other words, when you algorithms are very generic.

In the case where you know what your use cases and inputs will be you can just test for performances directly. Using both the tests and the asymptotic complexity will give you a good idea on how your algorithm will perform (in both extreme cases and arbitrary practical cases).

That being said, lets run some performance tests on the following class that will implement three different strategies (there are actually four strategies here, but Invalidate and Reinsert doesn't seem right in your case as you'll invalidate each item as many time as you see a given word). I'll include most of my code so you can double check that I haven't messed up (you can even check the complete notebook):

We can first check that all three methods work:

Then we can run some performance tests using the following functions:

The results are the following: 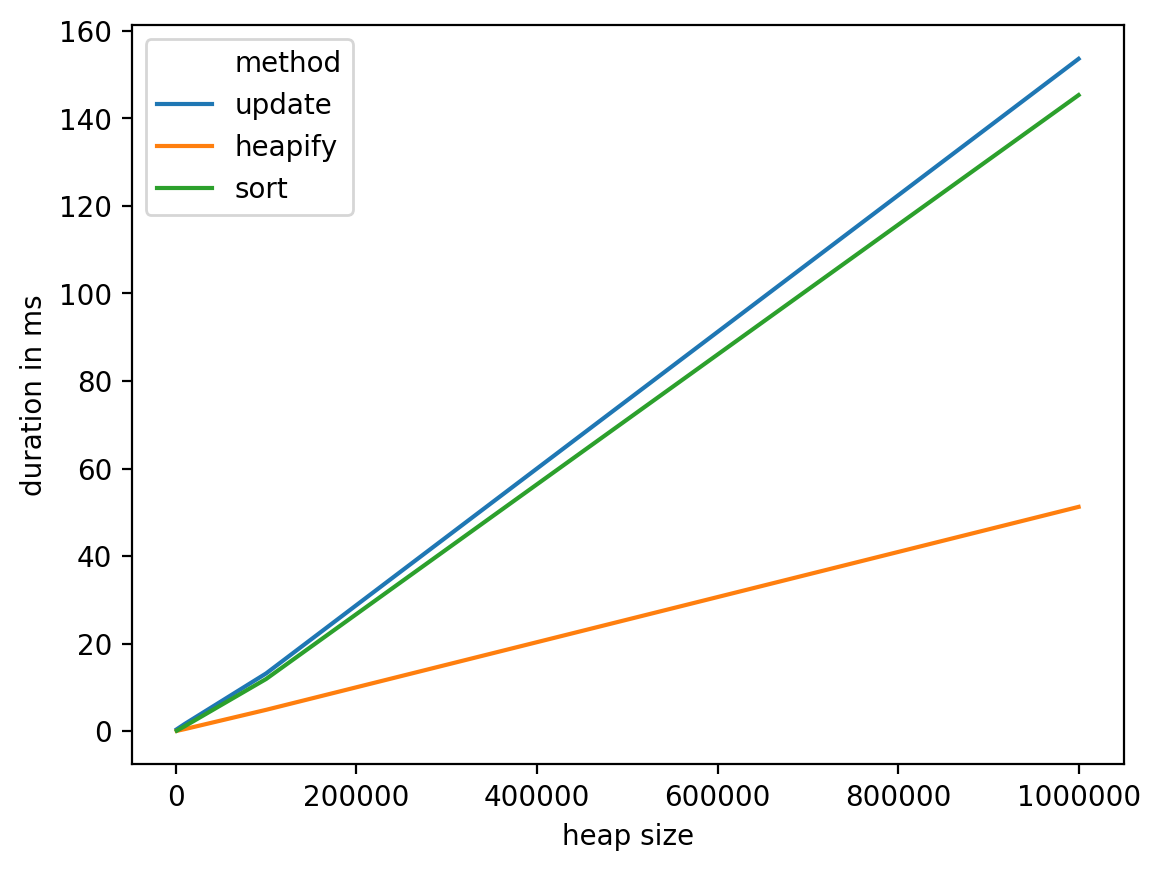 From these tests we can see that heapify seems like the most reasonable choice, it has a decent complexity in the worst case: O(n) and perform better in practice. On the other hand, it's probably a good idea to investigate other options (like having a data structure dedicated to that particular problem, for example using bins to drop words into, then moving them from a bin to the next look like a possible track to investigate).

Important remark: this scenario (updating vs. reading ratio of 1:1) is unfavorable to both the heapify and sort solutions. So if you manage to have a k:1 ratio, this conclusion will be even clearer (you can replace nb_updates = 1 with nb_updates = k in the above code).

The answer from @cglacet is completely wrong, but looks very legit. The code snippet he provided is completely broken! It is also very hard to read. _siftup() is called n//2 times in heapify() so it cannot be faster than _siftup() by itself.

To answer the original question, there is no better way. If you are concerned about the methods being private, create your own that do the same thing.

The only thing I agree with is, that if you don't need to read from the heap for a long time, it might be beneficial to lazy heapify() it once you need them. The question is if you should use a heap for that then.

Let's go over the problems with his snippet:

The heapify() function gets called multiple times for the "update" run. The chain of errors that lead to this is as follows:

I fixed the example, I tried verifying it as best as I could, but we all make mistakes. Feel free to check it yourself.

As you can see, the "update" method using _siftdown() and _siftup() is asymptotically faster.

You should know what your code does, and how long will it take to run. If in doubt you shouůd check. @cglaced checked how long does the execution take, but he didn't question how long should it take. If he did, he would find the two don't match up. And others fell for it. 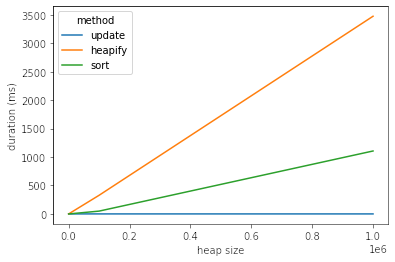 Not the answer you're looking for? Browse other questions tagged python heap or ask your own question.

1
heapq python - how to modify values for which heap is sorted
2
Why is _siftup and _siftdown just the opposite in Python?
0
how to build maxHeap in python

5685
How do I merge two dictionaries in a single expression (taking union of dictionaries)?
3231
How do I check if a list is empty?
6175
How do I check whether a file exists without exceptions?
5335
How to execute a program or call a system command from Python
4757
How can I safely create a nested directory in Python?
3388
Using global variables in a function
3417
How do I sort a dictionary by value?
4106
How to make a flat list out of a list of lists?
3467
How do I list all files of a directory?
3534
Iterating over dictionaries using 'for' loops