Is tomcat = apache (or other web server) + JavaEE? [duplicate]

Ask Question
Asked 1 year, 11 months ago
Active 1 year, 4 months ago
Viewed 625 times
0
This question already has answers here:
What is the difference between application server and web server? (28 answers)
What exactly is Java EE? (4 answers)
Closed 1 year ago.

So I understand there are two kinds of servers, first kind is web server (or http server) such as nginx, apache, caddy, another kind is app server, such as tomcat, undertow. I just wonder if a java app server equals a general web server plus a j2ee environment? Or maybe things are not so simple and the app server did a lot of stuff besides just mixing the java environment?

Http server only implements theHttp standard:it means accepting a Http request and sending a Http response.
supporting for php and other languages added via plugins to it(apache and so on). A raw Http server only support static resources nothing else but statics.

If Http server implements all specifications we have application server like glassfish.

Any java compatible server is a raw Http server plus some implemented specification.

As a seasoned Java developer, the assertion that Tomcat is the same as a web server plus a J2EE environment is irksome, because there are significant differences between Tomcat and Apache in terms of how they are optimized, the role they play in a modern architecture and even how they are physically installed.

Having said that, your assertion may actually be correct. From the standpoint of a beginner, someone new to server-side programming, it's not completely wrong to think of Tomcat as being just a web server with a bunch of magical powers added to it, namely the various Java based APIs Java EE/Jakarta EE builds into it.

Apache and Tomcat in practice

Tomcat does handle http based requests, and it can server files if it needs to, so it can do double duty. So from a simple standpoint, it's not totally wrong to think of Tomcat like that. Just remember that in modern architectures, the role of Tomcat and the Apache HTTP server are very different.

Here's a look at how the two play together in a three tiered architecture: 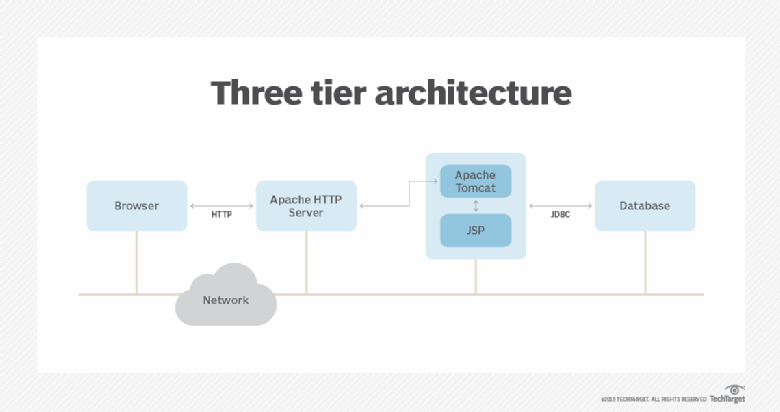 Not the answer you're looking for? Browse other questions tagged java tomcat jakarta-ee webserver httpserver or ask your own question.

796
What is the difference between application server and web server?
167
What exactly is Java EE?