Legend does not appear in holoviews for only 1 line

I have learned that holoviews is for some reasons not able to show a legend for hv.HLine. To bipass this problem I created a horizontal line by using hv.Curve. I now would like to add a legend for this curve but it does not appear in the plot. However, if a second curve is used in an overlay the legend appears:

What can I do to get the legend for one curve?

Directly showing a legend is currently (HoloViews 1.13) not possible for just one line/curve.

Only an Overlay (= 2 or more lines etc.) shown together in the same plot can have a Legend.

The simplest workaround would thus be creating an overlay of the same line:

So you put the same line/curve twice in the same plot. 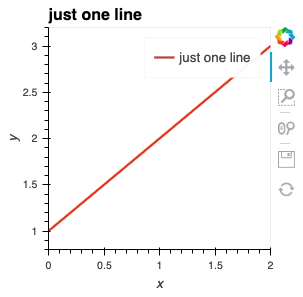 Not the answer you're looking for? Browse other questions tagged python legend holoviews or ask your own question.