I have written a python script which groups rows of an Excel file via the XlsxWriter Outlines and Grouping feature.

My file has two groups, one nested in the other one. Here's a minimal example:

This generates both groups in the 'hidden' state. When I maximize the first group, the second (inner) group also gets maximized.

How can I prevent the inner group from maximizing when the outer group gets maximized?

The only way to do this, that I know, is to maximize the groups and then minimize the inner and then the outer group by hand. When saved, closed and reopened the groups do not maximize both when maximizing the outer one. So Excel obviously has a way to store this information somehow.

You need to set the collapsed property at the right level. See the Working with Outlines and Grouping section of the XlsxWriter docs.

Here is a working example: 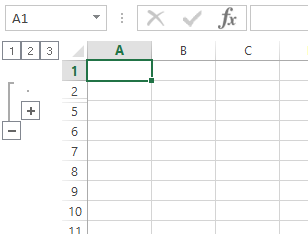 Not the answer you're looking for? Browse other questions tagged python excel xlsxwriter or ask your own question.

10
Openpyxl and Hidden/Unhidden Excel Worksheets
3
How to change the format of dataframe output when using pandas to_excel with ExcelWriter and xlsxwriter
1
Excel 2013 - issue when closing multiple workbooks if one workbook is hidden
4
Move a worksheet in a workbook using openpyxl or xl* or xlsxwriter?
0
Using pandas, how to only read one sheet from Excel workbook without loading any of the other sheets?
0
How do I assign an already running process (i.e Excel) to a Python Object (PyWin32) to close it