If Markdown is a superset of HTML, then why can't it do everything HTML can?

My understanding is that Markdown is a superset of HTML:

Markdown is a popular markup language that is a superset of HTML.

I'm assuming that it's a strict or proper superset. Drawing a parallel from What does it mean when one language is a parallel superset of another?, I interpret that to mean that every valid HTML program is also a valid Markdown program (e.g. HTML is understood in a Jupyter Notebook Markdown cell), but that the converse is not true.

What seems conflicting to me is that if Markdown is a superset of HTML, then why is it that Markdown can't do everything HTML can (I would think the opposite to be true since a superset extends the language without removing or changing any of the existing features. Also, I would expect HTML to be a superset of Markdown since HTML is more expressive and more difficult to read by most humans.

Below is a diagram trying to mimic that in What does “Objective-C is a superset of C more strictly than C++” mean exactly? 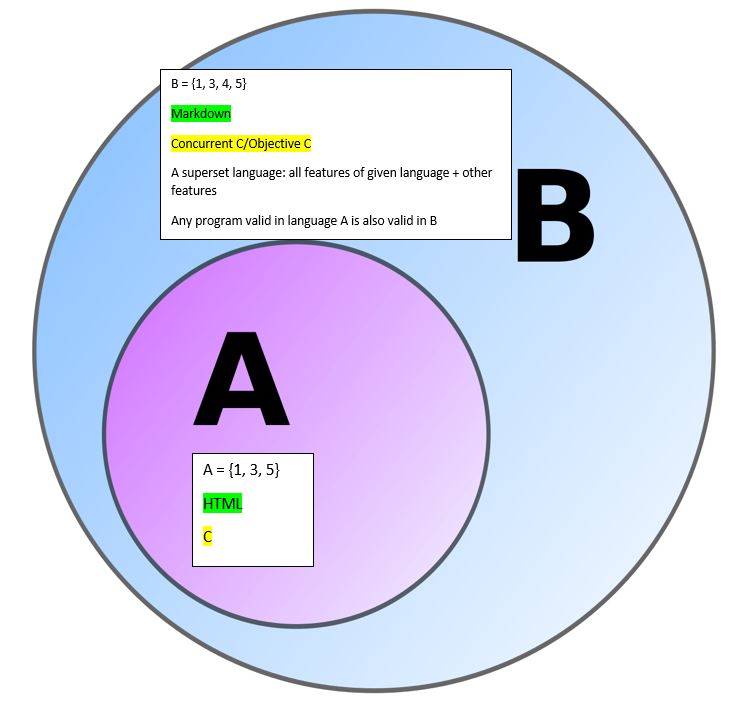 Markdown is not a replacement for HTML, or even close to it. Its syntax is very small, corresponding only to a very small subset of HTML tags. The idea is not to create a syntax that makes it easier to insert HTML tags. In my opinion, HTML tags are already easy to insert. The idea for Markdown is to make it easy to read, write, and edit prose. HTML is a publishing format; Markdown is a writing format. Thus, Markdown’s formatting syntax only addresses issues that can be conveyed in plain text.

Today there are several flavours of Markdown, many of which add features that were not present in the original version like tables and syntax-highlighted code blocks. This doesn't change the fundamental fact that Markdown covers a subset of HTML.

(Technically speaking, Markdown isn't a subset of HTML either. *, for example, has no special meaning in HTML. Unconverted Markdown documents might be well-formed HTML but the semantics are very different. But Markdown syntax maps to a subset of HTML tags.)

However, the very next paragraph in the original documentation says:

For any markup that is not covered by Markdown’s syntax, you simply use HTML itself. There’s no need to preface it or delimit it to indicate that you’re switching from Markdown to HTML; you just use the tags.

Since you can directly use HTML in Markdown it could be considered a superset of HTML. For example, this is valid Markdown:

If you pass an HTML document through a conforming Markdown processor it should come out the other side untouched. Being able to directly use HTML in Markdown is very similar to how one can directly use C in C++. This may be what the Jupyter documentation means.

259
Markdown vs markup - are they related?
88
What does "Objective-C is a superset of C more strictly than C++" mean exactly?
10
What does it mean when one language is a parallel superset of another?

940
Can HTML checkboxes be set to readonly?
12
What markup language for richly formatted content?
1355
What characters can be used for up/down triangle (arrow without stem) for display in HTML?
8
How can you convert RTF text to Markdown-syntaxed plain text in Cocoa?
1853
How can I set the default value for an HTML <select> element?
694
Can I create links with 'target="_blank"' in Markdown?
8506
Why does HTML think “chucknorris” is a color?
1
Markdown: show html as code example without it being converted to html layout