Why does Python start at index -1 (as opposed to 0) when indexing a list from the end? [duplicate]

To explain it in another way, because -0 is equal to 0, if backward starts from 0, it is ambiguous to the interpreter.

If you are confused about -, and looking for another way to index backwards more understandably, you can try ~, it is a mirror of forward:

~ actually is a math trick of inverse code and complement code, and it is more easy to understand in some situations.

In my opinion, if it is a code maintained by yourself, you can use any trick to avoid potential bug or achieve goal easier, because of maybe a high readability and usability. But in team work, avoid using 'too clever' code, may bring troubles to your co-workers.

For example, here is one concise code from Stefan Pochmann to solve this problem. I learned a lot from his code. But some are just for fun, too hackish to use.

Is short hand for:

The len(list) part is implicit. That's why the -1 is the last element. That goes for any negative index - the subtraction from len(list) is always implicit

This is the mnemonic method I use. It is just an approach of what is happening, but it works.

Don't think of those as indexes. Think of them as offsets on a circular list. 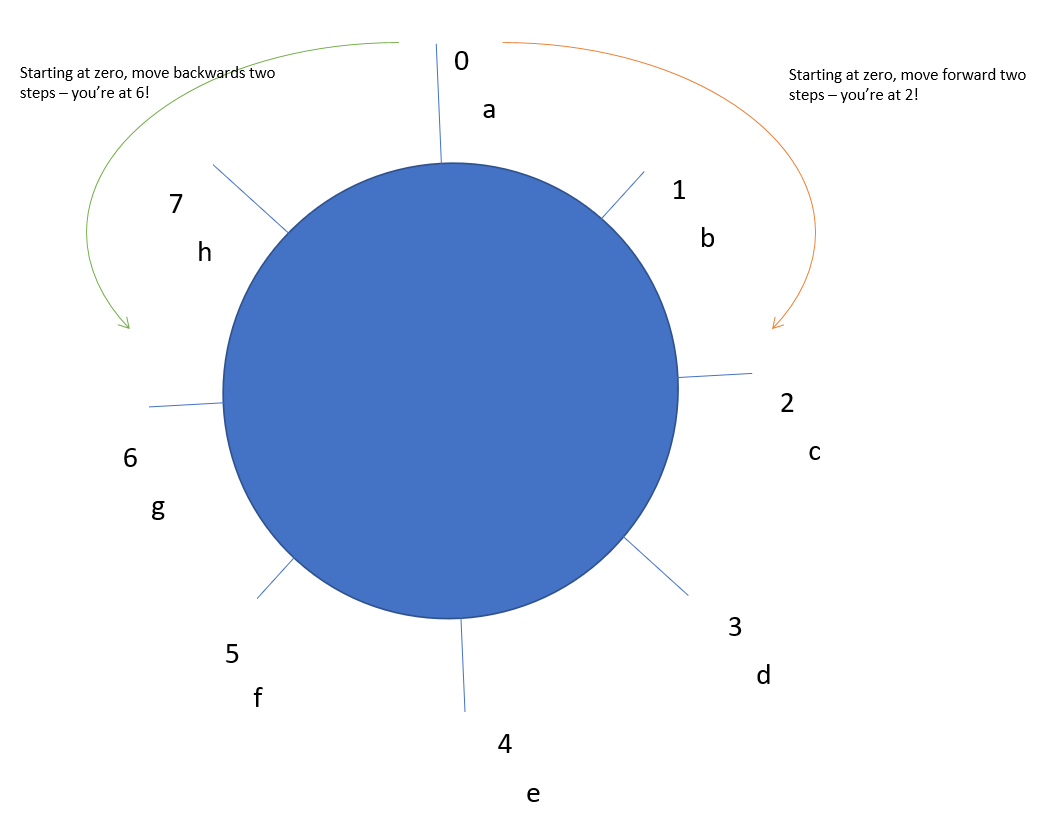 Because -0 in Python is 0.
With 0 you get first element of list and
with -1 you get the last element of the list

You can also think it as shorthand for list[len(list) - x] where x is the element position from the back. This is valid only if 0 < -(-x) < len(list)

For any list xs and index i positive or negative, the expression

will either have the same value as the expression below or produce an IndexError:

In Python, though, arrays are more often used as linear data structures than circular ones, so indices larger than -1 + len(xs) or smaller than -len(xs) are out of bounds since there's seldom a need for them and the effects would be really counterintuitive if the size of the array ever changed.

You could intuitively understand it this way

Suppose you start from a to d, a is your staring point where you stand (or your home), so mark it as 0(because you did not move yet),

Move one step to b, second step to c and arrive at third d.

Then how about you return from d to a (or return from your office to your home). Your home is 0 because your family live there, so your office cannot be a 0.It's your last stop.

So when you return back to home. d is the last first stop to where you start off for home, c is the last second ....

Not the answer you're looking for? Browse other questions tagged python list or ask your own question.

4034
Finding the index of an item in a list
12019
What does the "yield" keyword do?
3113
What is the difference between Python's list methods append and extend?
2843
How do you split a list into evenly sized chunks?
1995
How to remove an element from a list by index
2570
How do I get the last element of a list?
4627
How to make a flat list out of a list of lists
2174
How do I get the number of elements in a list in Python?
3068
How do I clone a list so that it doesn't change unexpectedly after assignment?
1611
Why not inherit from List<T>?