Now when I try to create a virtualenv with Python 36 in PyCharm, it raises: 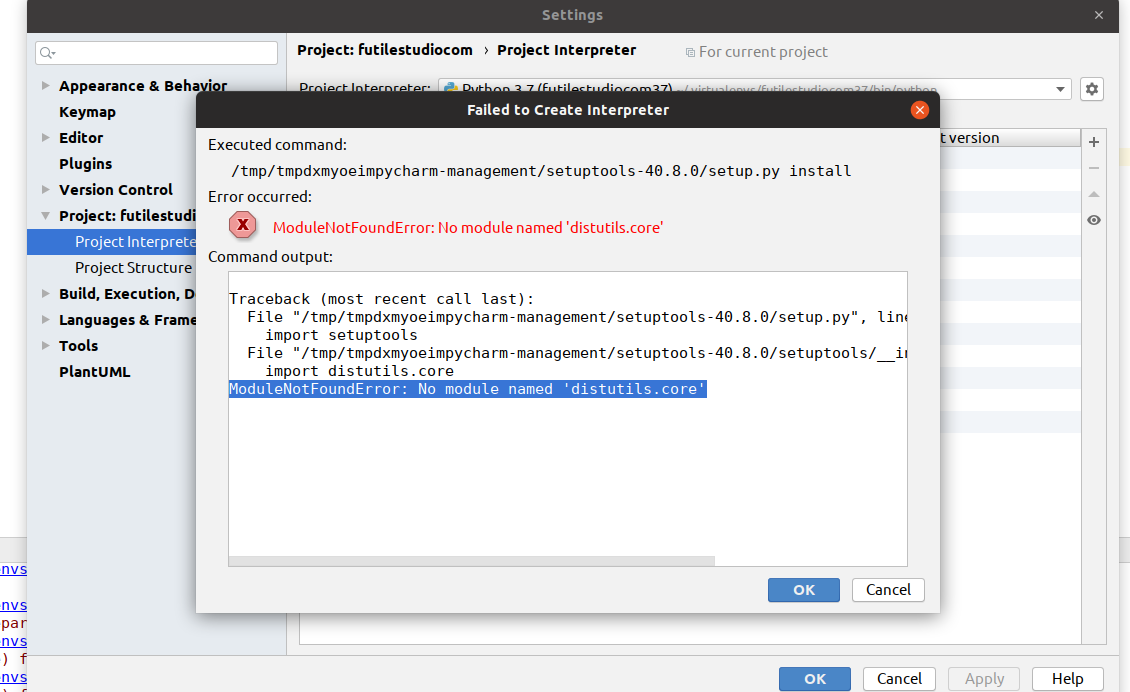 I can't figure out what to do.

I tried to install distutils:

But as you can see I have the newest version.

Do you know what to do?

Python base interpreter does require some additional modules. Those are not installed with e.g. Ubuntu 18.04 as default.

To solve this we need to first find the python version you're running. If you have only installed one python version on your system (and you are sure about it) you can skip this step.

You now need to install for this precise python interpreter the distutils. So here the solution for this example would be:

Keep in mind, that just running python from any command line might be an other version of python then you're running in your project!

If this hasn't helped, look for the following possibilities. This will bring you the binary which resolved from the alias in the command line.

original source: refer to this article

For this answer I've also merged, summarized, ordered and explained some of the content which has been provided by Neo, Andrei, Mostafa and Wolfgang.

As a side note for sorcerer's apprentice: You might be tempted to uninstall python interpreters. For proposed solution not necessary at all!! How ever, keep in mind that there is one python interpreter which your whole OS depends on. So this default one, you don't want to uninstall. If you do so, you're in a certain mess in finding your desktop taskbar and basically everything.

This happened on my python3.7 installation but not my main python3 after i upgrade my ubuntu to 20.04

then it works for me

Currently, I'm using ubuntu 18.04 and python 3.6.9. My problem was solved after running the following command as mentioned here:

More Details: Some modules in python are needed that not installed.

For me the problem was solved by specifically using python3 thus making sure python3.8 was used

I move on by using python_version = "3.6" with pipenv otherwise $ pipenv install would take the highest version of python and write it in the Pipfile and Pipfile.lock.

Not the answer you're looking for? Browse other questions tagged python pycharm virtualenv python-3.6 or ask your own question.

5
Package Python3.7 is not available

2141
Calling a function of a module by using its name (a string)
513
No module named pkg_resources
751
ImportError: No module named requests
0
update from python2.7 to python3
0
Unable to install python3.6 virtualenv in Ubuntu 19.10 ('no module named apport')
0
I've installed python-3.9.1 and pip but while running the command python3 -V got the result as python 3.6.9 how do I get python version 3.9