Difference between CouchDB and Couchbase

Are there any essential differences between CouchDB and Couchbase.

I think there are some essential differences between CouchDB and Couchbase Server that need to be pointed out.

All of the names relating to CouchDB and Couchbase can be really confusing, so I've updated this answer, to begin with a brief explanation of the most important ones.

There is CouchDB, CouchIO, CouchOne, Couchbase, Couchbase Server, Couchbase Mobile, Couchbase Lite, CouchApps, BigCouch, Touchbase, Membase, Memcached, MemcacheDB... all different and yet related in a way not at all obvious from the names alone.

First, there was CouchDB, a database created by Damien Katz, a former IBM developer. Its official name was changed to Apache CouchDB after it became an Apache project.

A company named CouchIO was founded to work on Apache CouchDB and later changed its name to CouchOne (by "its name" I mean the company name - not the database name).

CouchOne (formerly CouchIO) merged with Membase (formerly NorthScale) to form a new company called Couchbase. Membase (the company) developed Membase (a product of the same name). Membase was created by several leaders of the Memcached project and it used the Memcached protocol. After the merger of CouchOne and Membase, Couchbase continued the development of the Membase software and later changed its name to Couchbase Server.

Today I think most people believe that Couchbase Server is a new version of CouchDB but it is, in fact, a new version of Membase. It still uses the Memcached protocol and not the RESTful API of CouchDB. Meanwhile, CouchDB is still CouchDB, actively maintained and enhanced as an Apache project.

Now to the relevant differences:

The Couchbase Server is not entirely open-source/free software. There are two versions: Community Edition (free but no latest bug fixes) and Enterprise Edition (there are restrictions on usage, confidentiality provisions, audits by Couchbase Inc. that "will be conducted during regular business hours at Licensee's facilities" and other terms typical to proprietary software that many people may find unacceptable).

CouchDB is an open-source/free software (no strings attached) project of The Apache Software Foundation and is released under the Apache License, Version 2.0 (DFSG-compatible, FSF-approved, OSI-approved, GPL-compatible, non-copyleft, commercial-friendly).

I have never seen it directly pointed out but this may be actually the most important difference between those two databases because it is deeply about the underlying philosophy of distributed computing models and not only about certain features, APIs or licensing. CouchDB and the Couchbase Server completely differ in their philosophy of building distributed systems and databases.

According to the CAP theorem it is impossible for a distributed database to simultaneously provide consistency, availability and partition tolerance.

This is what I found to be a list of CouchDB features that are not supported by the Couchbase Server:

Those features of CouchDB may or may not be important to you so whether the lack of them is a disadvantage or not is strictly subjective, but I think that the decision whether to switch from CouchDB to Couchbase Server or not should be based on those differences and your dependence on those feature in your current CouchDB deployments.

For example if you've got interested in CouchDB after watching The CouchDB changes feed NodeCamp talk by Mikeal Rogers or one of the great CouchApp tutorials by J. Chris Anderson then you have to realize that if you want to switch to the Couchbase Server then you will have to forget about pretty much everything they were talking about.

Because of that, I would say that Couchbase Server looks like an evolution of Memcached and Membase (not an evolution of CouchDB) and as such it looks like a great product if you are currently using Memchached or Membase. If you are using CouchDB in the most basic way then you may consider using the Couchbase Server for the same things and it may or may not perform better (if you don't mind the license restrictions). But if you are actually using any of the features that are unique in CouchDB (like the changes feed, CouchApps, two-tier architecture, peer-to-peer replication etc.) then you can either forget about those features or stay with CouchDB. In any case, make sure to read and understand the Migration to Couchbase for CouchDB Users tutorial before you think about switching.

People often get the wrong impression (maybe after reading things like "What's the future of CouchDB? It's Couchbase.") that CouchDB is somehow obsoleted by the Couchbase Server, or that it is an old, legacy version of Couchbase. Meanwhile CouchDB is an actively maintained open-source project, Couchbase server is a completely separate project (it is a newer project but it is not a newer version of CouchDB - they are not even compatible) and since even new tools for creating CouchApps still keep being developed (eg. see the Kanso project) then CouchDB is not going anywhere soon.

I hope it clarifies the confusion. Please correct me if I'm wrong on anything here.

They are different yet similar pieces of software. I've remixed the content from the top answer into a picture that might help clarify the "difference" as well as the common things: 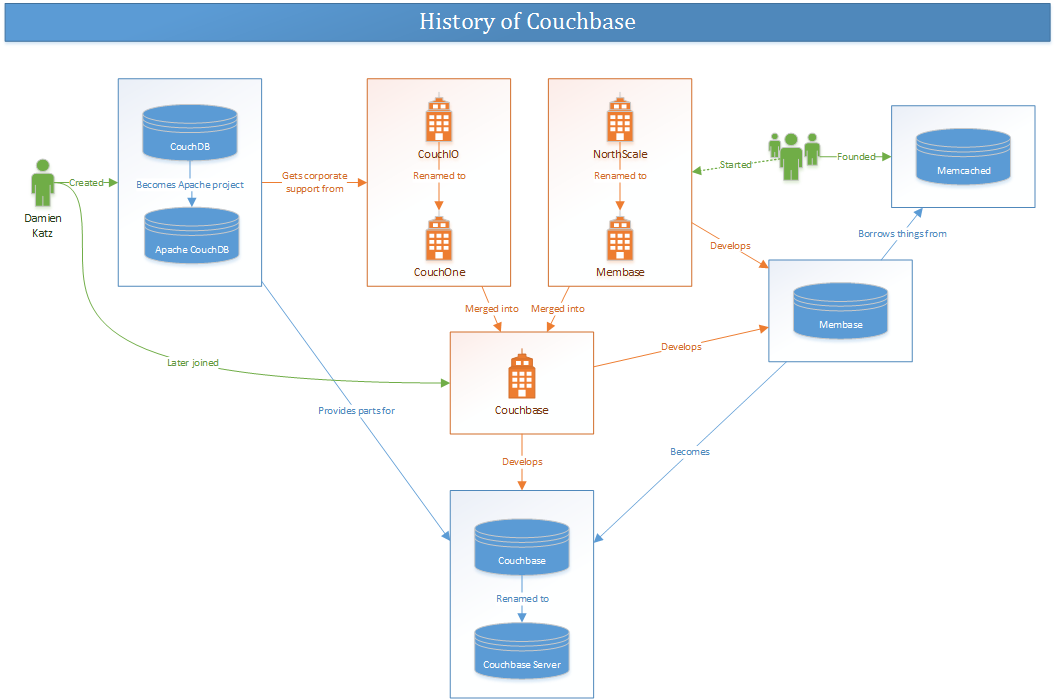 To add some context/corrections: NorthScale founders are Steve Yen and Dustin Sallings. I joined them shortly after founding. Also, Damien didn't later join Couchbase, he was part of CouchIO/Couch One prior to the merger. Citing a fun, historical source: https://youtube.com/watch?v=aZ_JOnU8tkI

I think CouchBase seem to be perceived as CouchDB's 'enterprise' alternative. Which in a way seem to be true. Apart from lack of ability to attach files to records ( documents) and 'out-of-box' REST endpoints compared to CouchDB, CouchBase has sql like language i.e. N1QL ( sometimes pronounced a Nickel). This is one of the reason why I don't really like / recommend using the term 'NoSQL'. I personally like term 'Non-relational'.

Not the answer you're looking for? Browse other questions tagged nosql couchdb couchbase or ask your own question.

79
What is the difference between Cassandra and CouchDB?
46
Confused on how to use CouchDB on Android
1
What is the difference between couchbase and couchdb? Are the clients fully interoperable?
677
When to use CouchDB over MongoDB and vice versa
15
Couchbase-lite and CouchDB
3
Connecting Couchbase sync adapter to couchdb server
5
Confused with CouchDB and Couchbase