Android Studio: This file not part of the project, but the project builds successfully

I have a strange problem that suddenly appeared in android studio. I created a new cpp file, and included it in Android.mk. Then I synced the project. However, android studio still complains that the file is not part of the project and that I need to sync, BUT the whole project builds successfully.

Likewise, if I remove one of the other older files from Android.mk that it did not complain about, and resyncs and then tries to build the project, as expected the build fails, but android studio does NOT complain that that file is not part of the project anymore.

So somehow, suddenly the android studio editor is not able to correctly identify which files have been synced and are part of the project, but during compilation everything works as expected.

Does anyone know how to fix this annoying problem? I have tried clean project, invalidate caches/restart as well as updating android studio without luck (AS version 3.4).

I had a similar problem. Like yourself, I have tried everything.

One thing that kind of helped me was: I changed the NDK version. I compiled, then got a compilation error (didn't matter because it was the wrong version of NDK anyway), then I reverted to the original NDK. This appeared to solve the problem, however, it got back again.

My solution was to reset Android Studio to factory settings. If you are on Linux, you can start by deleting these folders:

Then you download and run your Android Studio and not import anything from anywhere.

I suspect the problem was caused by one of the plugins I've installed.

It may be a good idea to backup those two folders from time to time and reload them from there if necessary.

EDIT: It seems that my problem persisted after the above solution after adding more .cpp files. After seeing that, I searched where that popup came from. It follows that "This file is not part of project..." popup is pushed from ndk-build. (Class name: NewCppSourceNotificationProvider - StaleCppProjectNotificationPanel). What I tried, and what worked so far; I used Android Studio 3.5 Canary13 with NDK version r19c (Stable version). I hope this helps you.

From the project root run (note this has to be done first):

I have similar problem, it could be the compatibility issue of gradle version and gradle plugin version, because my solution is replacing the old configuration

After that, Android studio can index and track my new cpp files in project.

fix this by update my 'com.android.tools.build:gradle'

Had the same problem with Android Studio 4.0.1 and the latest gradle at this time (6.1.1?). The problem went away after I exited Android Studio and deleted .gradle and .idea folders in the project main directory, plus deleted .cxx and build directories in the affected module directory. I'm not sure which really helped, but most probably deleting .grade and/or .idea 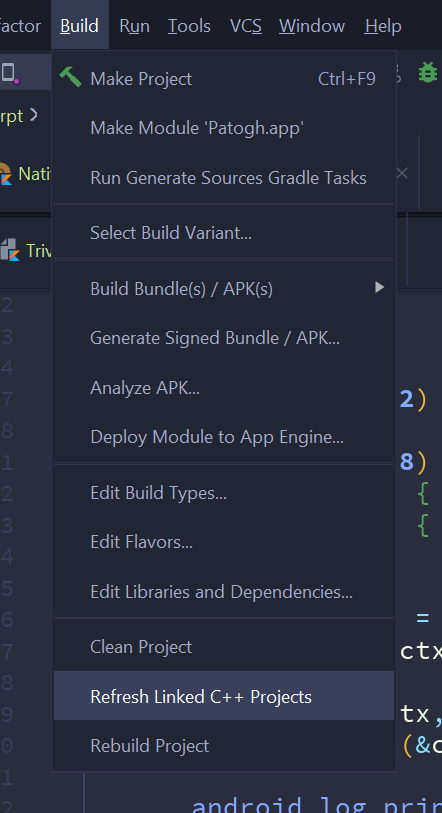 Not the answer you're looking for? Browse other questions tagged android-studio or ask your own question.

0
"This file is not part of the project Please include it in the appropiate build file(build.gradle, CMakeLists.txt…)
-1
Android Sutido 3.4 problem of including jni.h

810
How do I add a library project to Android Studio?
1331
What should be in my .gitignore for an Android Studio project?
1482
Where to place the 'assets' folder in Android Studio?
592
Search all the occurrences of a string in the entire project in Android Studio
478
Error type 3 Error: Activity class {} does not exist
576
How to get the SHA-1 fingerprint certificate in Android Studio for debug mode?
403
Android Studio is slow (how to speed up)?
792
Error retrieving parent for item: No resource found that matches the given name after upgrading to AppCompat v23
119
Android Studio shows wrong file contents