Does Both Referencing an Asset Catalogue and Including it from a Framework Create Duplication?

As discussed here & here, the only apparent way to host re-usable images in a Framework's .xcassets file, then use those images in the storyboard / XIB of an app, is to manually create a reference to that catalog file directly within the app's project. This puts the assets within the app's main bundle, and avoids this error when trying to use them via Interface Builder:

My question, though, is: Does this lead to duplication of the assets at build-time? Is iOS smart enough not to double-up assets which are both:

If this does lead to duplication, what other approach can achieve the same result more efficiently? The framework needs to be embedded in the app, because it contains other reusable code, and the assets need to be in the framework's catalog, because they're also used in other apps.

Apple's goal is to minimize the space required for assets, so assets are combined and compressed into one file called 'Assets.car'.

When you submit to the app store a process called App Thinning is started that creates variants for different actual devices.

You can mimic the process locally and with a third-party tools even take a look inside the 'Asset.car' file.

I described the whole process in detail in this answer: Pixelated images on iOS10 when building with Xcode 10

To test it myself I did the following:

So finally the image is saved twice in the .ipa file.

Unfortunately, it looks like if you want to avoid this duplication, you can't refer to it directly in the storyboard, but have to retrieve the image programmatically from the framework. 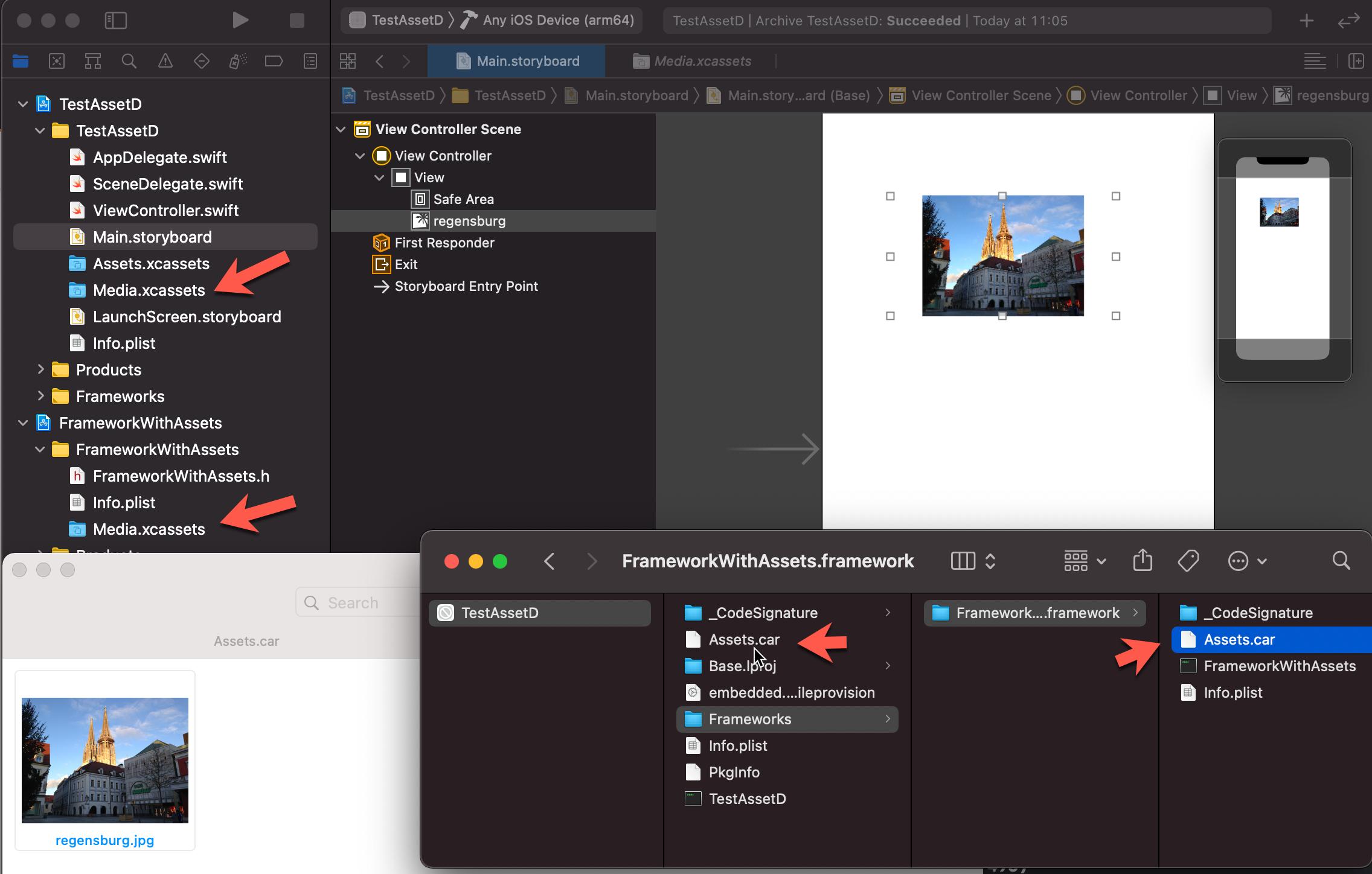 In the screenshot you can see:

Conclusion Unfortunately, it looks like if you want to avoid this duplication, you can't use Interface Builder and instead have to retrieve the image programmatically from the framework.

Like in my other answer I would recommend to take a look at this WWDC 2018 video: Session 227, Optimizing App Assets, https://developer.apple.com/videos/play/wwdc2018/227/

Not the answer you're looking for? Browse other questions tagged ios frameworks storyboard xcasset asset-catalog or ask your own question.

8
How to set image in storyboard from framework assests
3
Storyboard, UIImageView. Load image from bundle
-1
Pixelated images on iOS10 when building with Xcode 10

0
Unable to find nib named error when trying to load nib from within a framework
5
How can I load an image from Assets.car (compiled version of xcassets) within an NSBundle? (without using CocoaPods)
4
iOS8: How to load xib from Dynamic Framework
3
Increased size of compiled image assets in iOS 8
31
How to use images asset catalog in cocoapod library for iOS
308
UIImageView missing images in Launch Screen on device
13
Including Asset Catalogue in Test Targets
8
How to set image in storyboard from framework assests