Why kernel executions in different streams are not parallel?

I just learned stream technique in CUDA, and I tried it. Howerver undesired result returns, namely, the streams are not parallel. (On GPU Tesla M6, OS Red Hat Enterprise Linux 8)

My plan is to decompose the data in 'nStreams=4' sectors and use 4 streams to parallel the kernel execution.

Visual Profiler result shows that 4 different streams are not parallel. Stream 13 is the first to work and stream 16 is the last. There is 12.378us between stream 13 and stream 14. And each kernel execution lasts around 5us. In the line of 'Runtime API' above, it says 'cudaLaunch'.

Could you give me some advice? Thanks!

(I don't know how to upload pictures in stackoverflow, so I just describe the result in words.)

To add to the existing answer (which is completely correct), consider the following trivially complete version of the code you have posted in your question:

Note two differences -- the number of blocks launched per kernel is reduced, and the amount of total computation per thread is increased by setting rows to 2048. The kernel itself contains a grid-stride loop which allows each thread to process multiple inputs, ensuring that the whole input dataset is processed no matter how many total blocks/threads are launched.

Profiling on a similar Maxwell GPU to your device shows this: 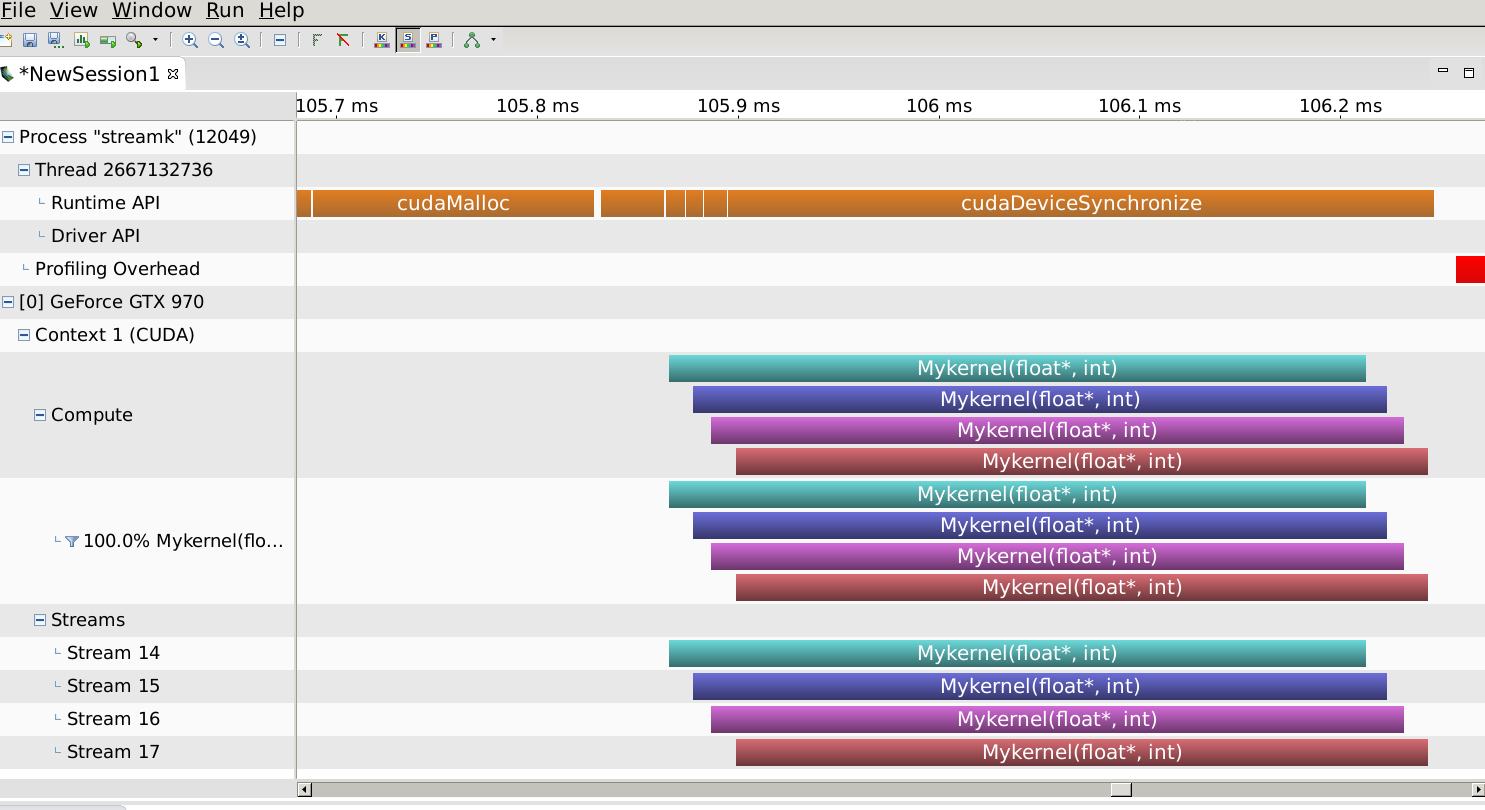 i.e. the kernels do overlap. Now let's reduce the problem size back to the size specified in your question (rows = 5): 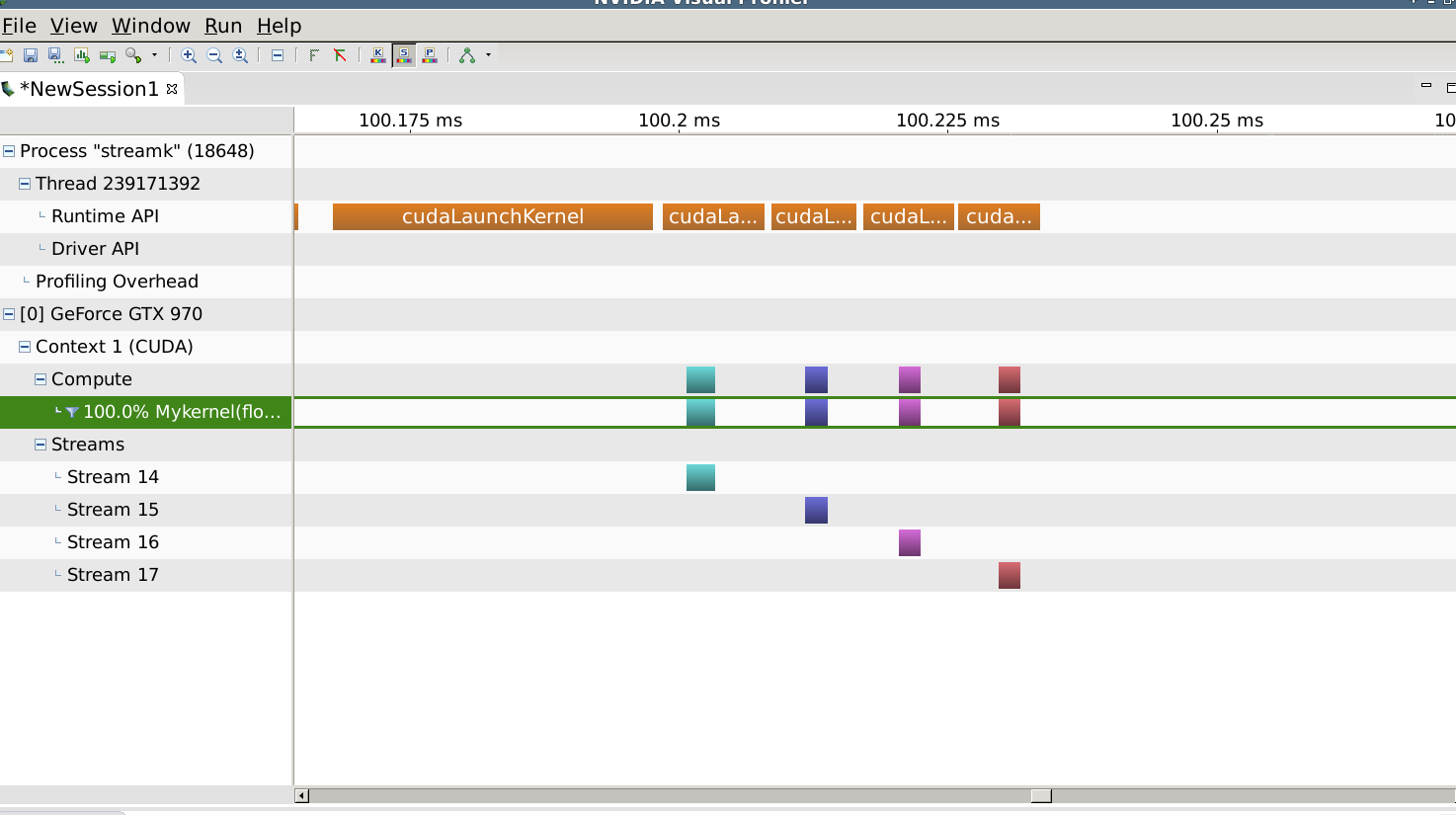 The kernels no longer overlap. Why? Because driver and device latency is high enough, and the execution time of each kernel short enough that there is no time for execution overlap to occur, even when device resources would otherwise allow it. So beyond the resource requirement limitations described in the other answer, the volume of computation must be large enough to offset the fixed latency associated with scheduling a kernel launch within a stream.

Finally I would suggest that the correct approach to setting up a stream based concurrent execution scheme should look something like this:

Here, the idea is that the number of available SMs are (roughly) equally divided amongst the streams, and the number of blocks which maximally occupy each SM for the selected block size is obtained for the kernel via the occupancy API.

This profiles as follows: 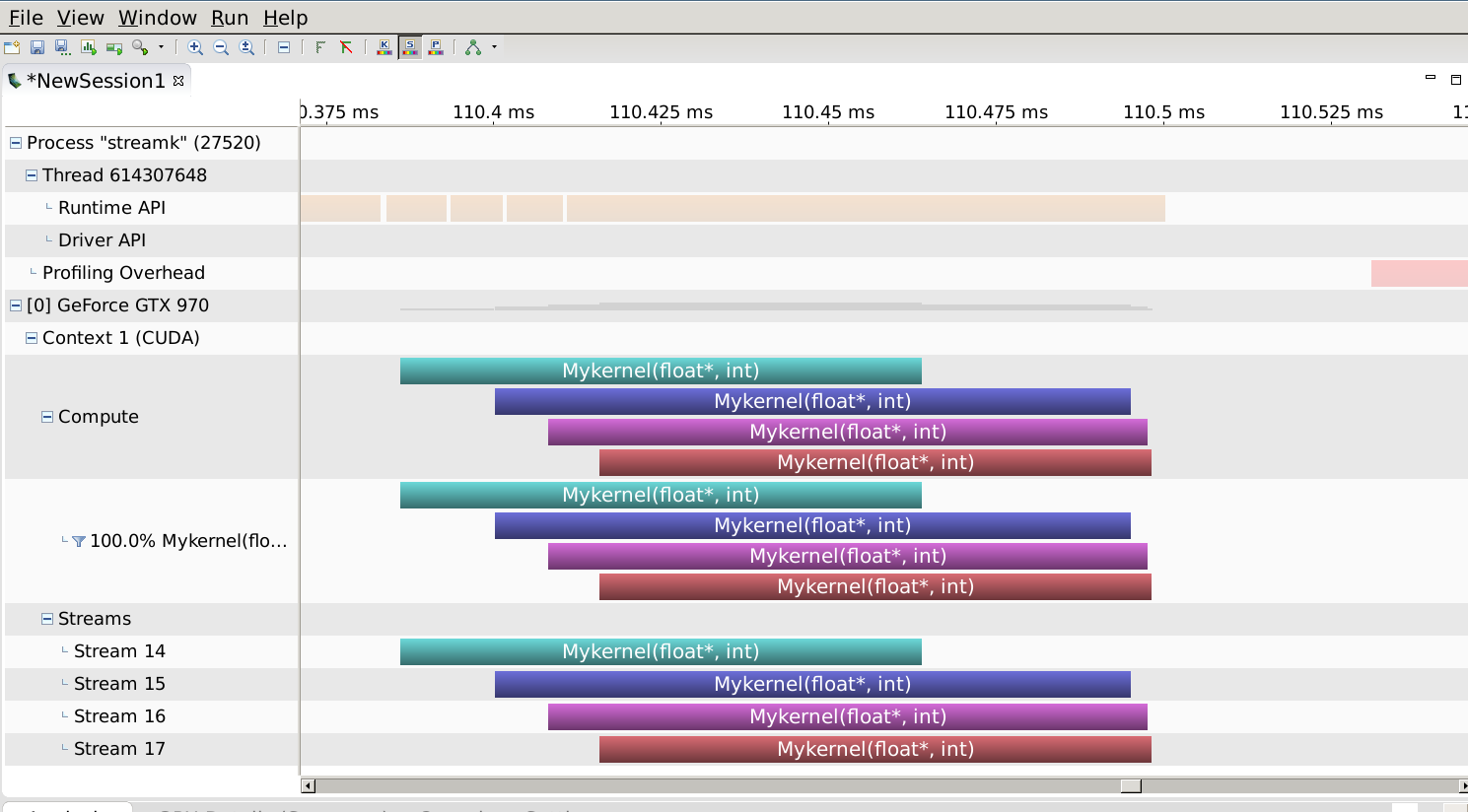 which yields both overlap, and short execution times by correctly matching the resource requirements of the kernel to the capacity of the GPU for the case with rows = 2048.

First of all, there is no guarantee that stuff launched in separate streams will actually be executed on the GPU in parallel. As pointed out in the programming guide, using multiple streams merely opens up the possibility, you cannot rely on it actually happening. It's up to the driver to decide.

Apart from that, your Tesla M6 has 12 multiprocessors if I'm not mistaken. Each of these 12 Maxwell multiprocessors can hold a maximum of 32 resident blocks. This brings the total maximum number of blocks resident on the entire device to 384. You're launching 320 blocks of 32 threads each. That alone doesn't leave all that much space and you're probably using more than 32 registers per thread so the GPU will be quite full with a single one of these launches, which is most likely why the driver chooses not to run another kernel in parallel.

Parallel kernel launches mainly make sense when you have, e.g., a bunch of small kernels that do different stuff which could run next to each other on separate multiprocessors. It seems that your workload could easily fill the entire device. What exactly are you hoping to achieve by running multiple kernels in parallel? Why are you working with such tiny blocks? Would it not make more sense to launch the whole thing as one big kernel with larger blocks? Normally, you'd want to have at least a couple warps per block. See, e.g., this question for more: How do I choose grid and block dimensions for CUDA kernels? If you're using shared memory, you'll also want at least two blocks per multiprocessor as you otherwise won't even be able to use all of it on some GPUs (which, e.g., offer 96 KiB shared memory per multiprocessor but each block can only have max 48 KiB of that)…

Not the answer you're looking for? Browse other questions tagged c++ cuda gpu or ask your own question.

117
How do I choose grid and block dimensions for CUDA kernels?

2510
What is the difference between #include <filename> and #include “filename”?
3412
What are the differences between a pointer variable and a reference variable in C++?
1894
Why can templates only be implemented in the header file?
2811
Why is “using namespace std;” considered bad practice?
1404
Why do we need virtual functions in C++?
2296
Why are elementwise additions much faster in separate loops than in a combined loop?
1560
Why does changing 0.1f to 0 slow down performance by 10x?
1934
Why is reading lines from stdin much slower in C++ than Python?
25218
Why is processing a sorted array faster than processing an unsorted array?
1679
Why should I use a pointer rather than the object itself?