How to fix ReferenceError: primordials is not defined in node

I have installed node modules by npm install, then I tried to do gulp sass-watch in command prompt. After that I got the below response.

Have tried this before gulp sass-watch

I hit the same error. I suspect you're using node 12 and gulp 3. That combination does not work: https://github.com/gulpjs/gulp/issues/2324

A previous workaround from Jan. does not work either: https://github.com/gulpjs/gulp/issues/2246

Solution: Either upgrade to gulp 4 or downgrade to an earlier node.

We encountered the same issue when updating a legacy project depending on gulp@3.9.1 to Node.js 12+.

If you are using yarn v1

If you are using npm

Using npm-force-resolutions as a preinstall script, you can obtain a similar result as with yarn v1. You need to modify your package.json this way:

graceful-fs@^4.0.0 does not monkeypatch Node.js fs module anymore, which makes it compatible with Node.js > 11.15 (tested and working with versions 12 and 14).

Note that this is not a perennial solution but it helps when you don't have the time to update to gulp@^4.0.0.

Just follow these steps. I'm on windows 10 and it worked perfectly for me!

Will solve this issue:

Using NVM to manage what node version you're using, running the following commands worked for me:

Gulp 3.9.1 doesn't work with Node v12.x.x, and if you upgrade to Gulp 4.0.2, you have to completely change gulpfile.js with the new Syntax (Series & Parallels). So your best bet is to downgrade to Node V 11.x.x, the 11.15.0 worked fine for me. By simply using the following code in terminal:

Just follow these steps. It worked perfectly with npm install running multiple times or installing any other modules or even publishing project to artifactory.

In the same directory where you have package.json create a npm-shrinkwrap.json file with the following contents:

Run npm install, and don't worry, it'll update npm-shrinkwrap.json with a bunch of content. Let's get rid of this updates by updating package.json scripts options.

Now you can run npm install and your npm-shrinkwrap.json will be intact and will work forever.

had same error and finally fix that when updated all packages and then mentioned the same node engine version and npm version in package.json as it is in my local working system.

i was getting this error when deploying on heroku.

If you are short on time, downgrade Node to v11.* or below; if you need newer features, and have time to possibly fix a load of broken dependencies, upgrade Gulp to 4.* or above!

As others have already mentioned, Gulp 3.* is not supported on Node 12 or above, so you will have to downgrade your Node version to 11.* or below, OR upgrade your Gulp to 4.0.

The best option depends ultimately on how much time you have, as upgrading Gulp brings benefits of cleaner gulpfiles and in-built control over having tasks run in series or parallel, but also relies on you re-writing your gulpfile to a new syntax, and might (read: probably will - see end of this comment) cause conflicts with some dependencies.

This is the easiest and quickest option. Especially if you use n or nvm, as these allow you to very quick install and switch between Node versions.

One you have done this, you may need to rebuild your npm dependencies or alternatively remove both your node_modules folder AND your package-lock.json file and re-installing your dependencies. Though if you are merely reverting to a pre-existing Node version, you should probably be fine.

As mentioned above, this is a more time-intensive task, but might bring benefits in the long-run. For example, Node 12 has now introduced native support for ES Modules (behind an experimental flag) and full support in Node 13.

You may need to upgrade Node to use that, forcing you to upgrade Gulp. Or you may simply want the benefits of using Gulp 4, as it offers better and more efficient control over writing tasks.

There are a number of articles on this already, so I won't elaborate any further on the specifics, but to reiterate - this is not a quick job. Depending on the size of your project, there may be some notable re-writing required, and you may have dependencies that break. If you are in short supply of time, you should opt for simply downgrading Node, at least temporarily.

If, like me, you are already using Gulp 4+ (I was using Gulp 4.0.2, originally on Node 10) and have recently upgraded (I upgraded to Node 13.8.0) are you are still getting the issue, it may be because a dependency is relying on an older version of Gulp, and that is getting caught in the pipeline.

If this happens, you have a few options: you can,

Needless to say, if you have several plugins that rely on older version of Gulp - especially if these plugins are vital for your application - this is where there can be a huge additional chunk of time spent in upgrading Gulp (hence the warnings above).

If this happens, it is best to just downgrade Node, at least until patches can be issued.

In case the problem is not from gulp then check the unzip npm module. it's been around six years since the last time it was updated. it doesn't work with Node > v11.

Downgrading to node stable fixed this issue for me, as it occurred after I upgraded to node 12

This error is because of the new version of Node (12) and an old version of gulp (less than 4).

In most cases, we will have to update the gulpfile.js as well like the following:

I faced the same issue. What I tried and worked for me:

It worked fine, then just follow instruction of your console.

I was getting this error on Windows 10. Turned out to be a corrupted roaming profile.

I fixed this issue on Windows 10 by uninstalling node from Add or remove programs -> Node.js

Gulp is making issue with Nodejs version 11 and above. Uninstall your current node version and reinstall the v10.15.1 here is link for that version. This helps me and it will solve your problem too.

Add/Update the gulp under dependencies section of your package.json

Finally, Run npm i to upgrade and recreate brand new node_modules folder and package-lock.json file with correct parameters for Gulp ^4.0

To learn more about applying these new features, this site have really done justice to it: https://www.sitepoint.com/how-to-migrate-to-gulp-4/

(If it helps, please leave a thumps up)

For those who are using yarn.

This is because the compatibility issue between node and gulp in your system. Downgrading the node or upgrading the gulp will fix this issue.

Try removing the node_modules folder and package-lock.json file and installing again using npm i command if still not working.

If you're trying to install semantic-ui and the following error occurs then try downloading the latest version of node js(13.5.0) with the latest features, from Node.js.org, Moreover rather than trying NPM install semantic you should just add the link (which you can find from cdnjs link to the header of your index.html file. Best of luck!

Since my project was using gulp version 4 , I had to do the following to solve this

Here is the detail of version I am using

Now run npm install then run gulp default , the error should gone and you may see Task never defined: default only.

Have a good day.

I had this very same error, but it was caused by a different issue.

The cause of the problem was graceful-fs package. Whenever I tried to run npm, even running npm-v was firing "ReferenceError: primordials is not defined".

I tried running npm install graceful-fs@latest, but it still didn't work, even though the package was latest version.

So what helped me?

This way you'll find all packages on which graceful-fs is dependency and which version it has. In my case it was mostly version 3.0, even though I've installed version 4.2.6

So how to fix it?

Open npm-shrinkwrap.json (not sure about packages-lock.json) and change search for graceful-fs - you'll see that it has older versions on a few places. Replace it with ^4.2.6 (or newer).

Then npm audit fix --force which will forcefully install the newer version everywhere.

Hope this works for you, it took me a few hours to find out how to fix it.

add your node version to the package.json like so:

You Have Two Option Here

I got the same issue installing the npm package https://www.npmjs.com/package/webshot

NOTE: it was a known issue for that package as it depends on graceful-fs behind the scenes.

I have tried a lot of suggestions to fix this problem for an existing project on my Windows 10 machine and ended up following these steps to fix it;

Please note sometimes when I switch between git branches I might need to close my Visual Studio and run it as Admin again in order to see this solution working again.

As far as I see this problem started to happen after I installed the latest recommended version(12.18.4) of Node.js for a new project and I only realised this when some FE changes weren't reflected on the existing web project. 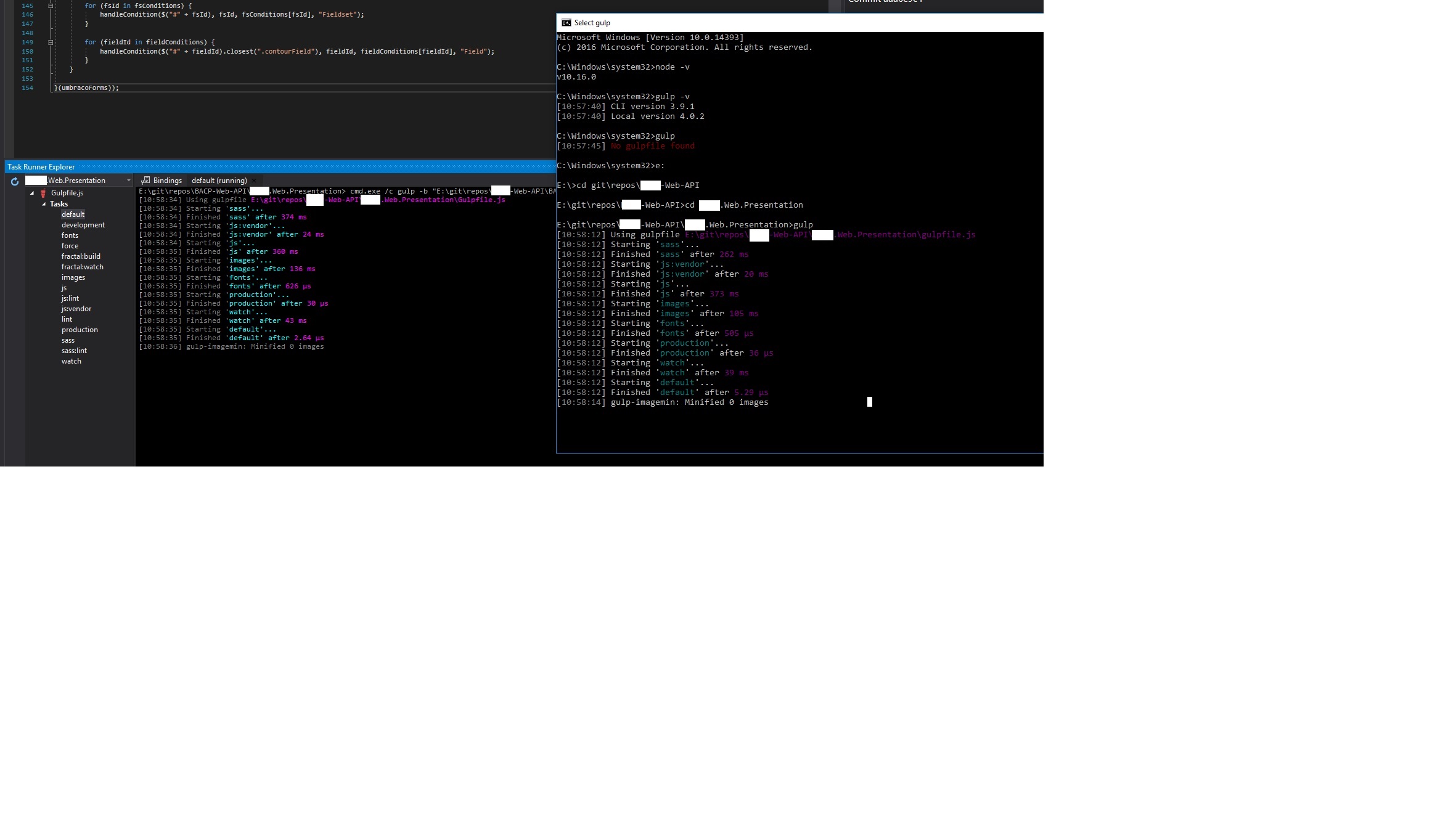 Not the answer you're looking for? Browse other questions tagged node.js sass gulp gulp-sass or ask your own question.