What is the difference between software threads, hardware threads and java threads?

Are software threads, java threads and hardware threads independent or interdependent? I am asking this because, I know Java threads are created inside a process with in jvm (java.exe).

Also is it true that these different process are executed on different hardware threads?

Software threads are threads of execution managed by the operating system.

Hardware threads are a feature of some processors that allow better utilisation of the processor under some circumstances. They may be exposed to/by the operating system as appearing to be additional cores ("hyperthreading").

In Java, the threads you create maintain the software thread abstraction, where the JVM is the "operating system". Whether the JVM then maps Java threads to OS threads is the JVM's business (but it almost certainly does). And then the OS will be using hardware threads if they are available.

A "hardware thread" is a physical CPU or core. So, a 4 core CPU can genuinely support 4 hardware threads at once - the CPU really is doing 4 things at the same time.

One hardware thread can run many software threads. In modern operating systems, this is often done by time-slicing - each thread gets a few milliseconds to execute before the OS schedules another thread to run on that CPU. Since the OS switches back and forth between the threads quickly, it appears as if one CPU is doing more than one thing at once, but in reality, a core is still running only one hardware thread, which switches between many software threads.

Modern JVMs map java threads directly to the native threads provided by the OS, so there is no inherent overhead introduced by java threads vs native threads. As to hardware threads, the OS tries to map threads to cores, if there are sufficient cores. So, if you have a java program that starts 4 threads, and have 4 or more cores, there's a good chance your 4 threads will run truly in parallel on 4 separate cores, if the cores are idle.

Hardware threads can be thought of as the CPU cores, although each core can run multiple threads. Most of the CPUs mention how many threads can be run on each core (on linux, lscpu command gives this detail). These are the number of cores that can be used in parallel.

Software threads are a software abstraction implemented by the (Linux) kernel:

Key to their implementation is the hardware provided and kernel configured separation between userland and kerneland: What are Ring 0 and Ring 3 in the context of operating systems?

I will not focus on hardware threads, which is the more obscure hardware question, with a focus on Intel's implementation which it calls Hyperthreading. 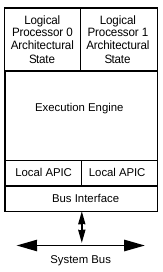 TODO it is slower by how much percent in average in real applications?

Hyperthreading is possible because modern single CPUs cores already execute multiple instructions at once with the instruction pipeline https://en.wikipedia.org/wiki/Instruction_pipelining

Two hyperthreads in a single core share further cache levels (TODO how many? L1?) than two different cores, which share only L3, see:

The interface that each hyperthread exposes to the operating system is similar to that of an actual core, and both can be controlled separately. Thus cat /proc/cpuinfo shows me 4 processors, even though I only have 2 cores with 2 hyperthreads each.

Operating systems can however take advantage of knowing which hyperthreads are on the same core to run multiple threads of a given program on a single core, which might improve cache usage.

I think you are mistaken. I never heard about hardware threads (unless you mean hyper threading on certain intel machines). Every process is a running representation of a program. Threads are simultaneous execution flows with in a process. Java thread definitions are mapped to system threads by JVM. Java used to have a concept of GreenThreads, which is no longer the case.

Not the answer you're looking for? Browse other questions tagged multithreading hardware or ask your own question.

47
How are cache memories shared in multicore Intel CPUs?
40
What are Ring 0 and Ring 3 in the context of operating systems?
18
Multiple threads and CPU cache
5
What is a warp in context of OpenCL?
0
Using more software threads than CPUs = oversubscribing?
1
Does software threads include user threads?

583
Cross-thread operation not valid: Control accessed from a thread other than the thread it was created on
1638
What is the difference between a process and a thread?
2118
“implements Runnable” vs “extends Thread” in Java
1392
How do I update the GUI from another thread?
262
What resources are shared between threads?
809
What is a daemon thread in Java?
1276
How can I use threading in Python?
233
What is a “thread” (really)?
178
Why is creating a Thread said to be expensive?
1893
C++11 introduced a standardized memory model. What does it mean? And how is it going to affect C++ programming?