How to build Qt for Visual Studio 2010

I struggled finding a how-to which provides a stable solution for using Qt with Visual Studio 2010, so after collecting all the bits of information and some trial and error, I would like to write my solution into a guide.

The problem, or why is it not possible to use prebuilt binaries?

It seems that using binaries built for Visual Studio 2008 might work in some special cases, but I found them not to work. In my case they compiled OK, but they produce runtime errors, like this:

or when started from Visual Studio 2010:

Update: I found a blog post analysing why does it work for some people, while it does not for others. In one word, it depends on whether you have Visual Studio 2008 installed on the same machine, or not. http://blog.paulnettleship.com/2010/11/11/troubleshooting-visual-studio-2010-and-qt-4-7-integration/

First of all, it’s very important to understand that for using Qt with Visual Studio 2010, it's not possible to use the pre-built binaries which were made for Visual Studio 2008, but you have to compile it from source. 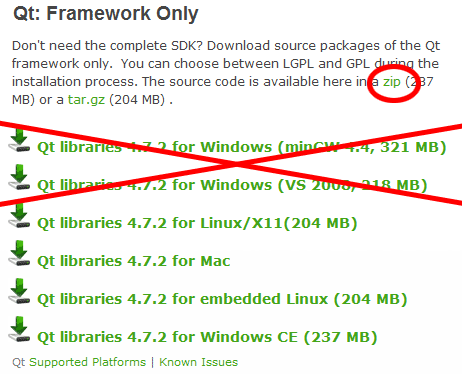 On that link, you get a big zip file like "qt-everywhere-opensource-src-4.8.6.zip". Unzip this into a folder and make its path something nice and small, for example "E:\Qt"

Now that we have the sources, we need to build the binaries. To do it, open the Microsoft Visual Studio 2010\Visual Studio Tools\Visual Studio Command Prompt (2010) link from your start menu, or even pin it to the taskbar (a good idea). This is a special command prompt which has all the variables set for building with Visual Studio 2010 tools.

Once within the command prompt, navigate to your extracted Qt folder using old-school DOS way, which means you have to change drive letter by E:, enter directories by cd Qt and list dir contents by dir. You can use the tab key for helping you with the directory names. When you have arrived at the correct directory, a dir command should return something like this.

Now it’s time for configure and build. For configuring a minimalist Qt, I'm using the following flags with configure.exe. Just copy and paste it into the command line. Look in the Qt reference manual for what flag to use or not to use.

Once configure.exe has finished (it was 10 minutes for me), you'll need to start the build process. It will take about 20-30 minutes with the above flags. To start it, just type:

Basically, we are done. All you need to do is to set your environment variables (QTDIR and PATH), which tell programs where to find Qt. If you are on Windows 7, you can use the following command to set QTDIR to your installation dir.

For setting the PATH, I strongly recommend using Path Editor. Within Path Editor

(it doesn't matter if it's in system path or user path)

If you prefer to use Control Panel\System\Environment Variables, then you can set these there, too.

Here you go, after a logoff-logon or a restart, all the Qt demo applications should start correctly (I recommend have a look at bin\qtdemo.exe). Now you can download and install the Visual Studio Add-in (qt-vs-addin-1.1.9.exe) from the Qt download page, it will work perfectly. 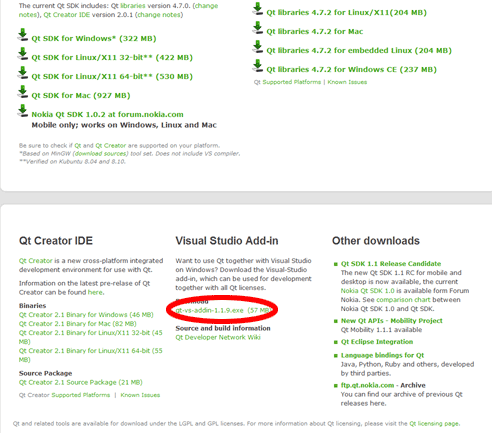 There is a page at the official wiki at the Qt website called Qt 4.8 Installing Qt for Windows, but I found it lacking important information.

Qt V4.8.0 contains prebuilt binaries for Visual Studio 2010 so you don't need to do this anymore: http://qt.nokia.com/downloads/windows-cpp-vs2010

Refer below link and it might be useful 1)https://www.slicer.org/slicerWiki/index.php/Documentation/Nightly/Developers/Build_Instructions/Prerequisites/Qt#Windows_3 2)http://eecs.vanderbilt.edu/research/hmtl/wp/index.php/qt-vs/

Not the answer you're looking for? Browse other questions tagged c++ visual-studio visual-studio-2010 qt build or ask your own question.