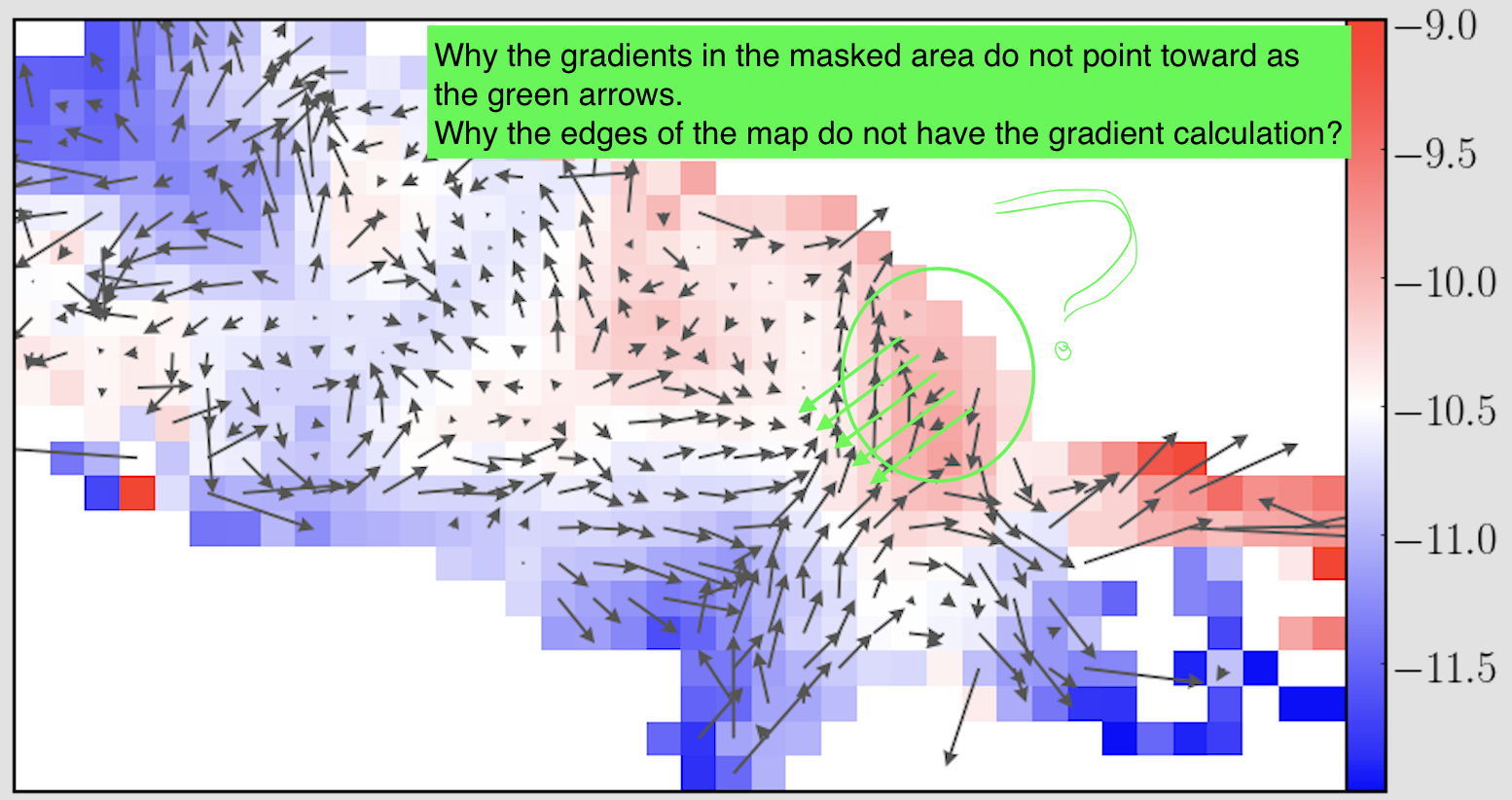 I am confused with two things about my resulting map:

I would appreciate if anyone can help me figure out my confusions. If you want to play with my data 'test_subim.fits', please visit my google drive. Before playing it, you must install the package astropy probably through the following command, pip install astropy.

Thank you very much again in advance for anyone who can help me out.

python numpy gradient
Share
Improve this question
edited May 8 '19 at 18:33

1) Because the 'white part' is not the top of the mountain, it goes, blue -> white -> red, as you can see in the bar in the right hand side. So the blue is the valley and the red are the mountains, and the arrows point where it is uphill.

More mathematically, your function at the edges is not differentiable, so you can't compute a gradient.

The gradient is not just the difference between two points. It is a measure for how much the surface is at that space locally. Let's take a look at a five by five example. We will calculate the gradient for the middle point. It points in the steepest direction, the direction in which if you were walking on a hill, would get you up the highest by only taking one step. How do you know this direction, you look at all the directions - let's say 1°, 2°, .. 360° - (I'm cutting some mathematical corners here but that's not important right now), take a step, see how much height you have won, and then you go back to the starting position. The direction that got you to the highest point is the direction of the gradient. How much height you have won is given by the size of the gradient (how long the arrow is).

Now let's say you are standing at the top (which is the top left pixel in a 2D view), and you want to take a step in each direction. Down left, no problem, down right, no problem, but up right and up left? There's no pixel there??? What do I do now? That's why there is no gradient.

Lets say we change the terrain from the left image to the terrain in the right image. Then the gradient will point in a direction between the - now two - heighest pixels. 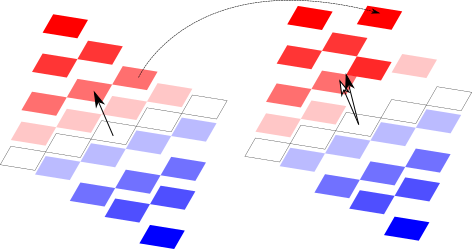 Not the answer you're looking for? Browse other questions tagged python numpy gradient or ask your own question.

4910
How can I safely create a nested directory in Python?
3359
How to get the current time in Python
2941
How to make function decorators and chain them together?
4258
How to make a flat list out of a list of lists
2958
How do I pass a variable by reference?
1324
How do I combine a background-image and CSS3 gradient on the same element?
3466
How do I list all files of a directory?
2586
How to access environment variable values